TOKYO – A pair of Marine Corps F-35B Lightning II stealth aircraft became the first fighters to fly from a Japanese carrier since World War II after landing and taking off from the JS Izumo on Sunday.

News about the successful test of the newly upgraded warship’s ability to support the short-takeoff, vertical-landing jets was tweeted by the Japan Maritime Self-Defense Force on Tuesday.

The message, which included video footage of the operation, said the JMSDF will continue “to steadily carry out the necessary modifications to the Izumo class to acquire the capability to operate the F-35B.”

“Our F-35s are the first fighter aircraft to fly from a Japanese carrier since WWII,” he wrote in a follow-up tweet.

Plans to land and launch F-35Bs from the Izumo were announced Thursday by Japan’s Defense Ministry, although they’d been signaled by Marine Corps Commandant Gen. David Berger during a security dialogue last month.

The aircraft tapped to land on the Izumo were from Marine Corps Air Station Iwakuni, about 50 miles south of Hiroshima, Kunze said in a telephone interview Friday.

The Izumo, commissioned in 2015 as a helicopter carrier, had heat-resistant coating added to its deck this year, enabling it to support the F-35B’s vertical landings. Its sister ship, the JS Kaga, is scheduled for a similar makeover ahead of Japan’s acquisition of 42 F-35Bs, which are slated to arrive sometime in the next five years.

Air Force CV-22 Osprey tiltrotor aircraft made their first-ever landing on the Kaga during the Keen Sword drills off Japan’s coast in October 2020.

Japan already operates the F-35A, a conventional takeoff-and-landing version of aircraft, from Misawa Air Base in the country’s northeast.

Japan’s return to carrier operations for the first time since World War II comes as China expands its own fleet of flattops. Beijing launched its first carrier, the Liaoning, in 2012 and a second, the Shandong, in 2017. A third carrier, similar in size to the USS Gerald R. Ford, is under construction in Shanghai, Naval News reported April. 15. 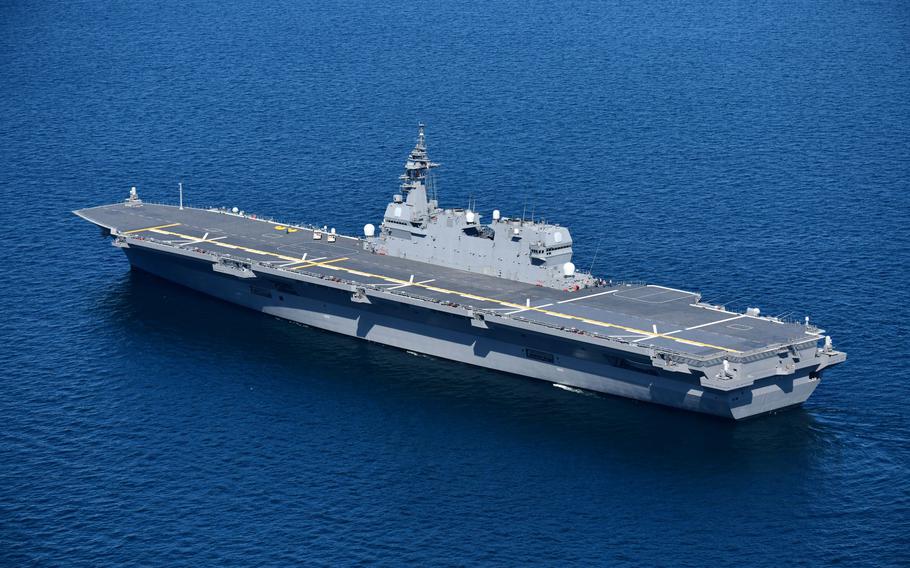 The fact that Marine Corps’ F-35Bs could take off and land from the JS Izumo improves the ability of U.S. and Japanese forces to work together, strengthening the deterrence and adaptability of the U.S.-Japan alliance, according to the ministry.

“We will further conduct improvements of Izumo-class destroyers and improve our operability in air and sea,” the statement said.