The Israeli military bombed a number of locations surrounding Damascus in a rare daytime strike on Saturday, according to Syrian media, reportedly targeting advanced weapons heading to the Hezbollah terror group and other Iranian proxies.

The Syrian state media outlet SANA said the strikes were carried out using surface-to-surface missiles fired from northern Israel and that explosions were heard in the countryside surrounding the Syrian capital.

Strikes were reported in the areas of al-Dimas, Qudsaya and al-Mezzah military air base — all located west of Damascus. Although not unheard of, daytime strikes on Syrian targets are relatively rare.

Citing a military source, SANA said two Syrian soldiers were injured and there was “material damage” after the country’s air defense systems were activated against “hostile targets from the direction of occupied lands,” an apparent reference to Israel. The military source claimed that the missiles were “repelled,” a common claim by Syria, which Israeli military officials and independent analysts largely regard as false, empty boasts.

The United Kingdom-based Syrian Observatory for Human Rights, a pro-opposition group of unclear funding, said Saturday’s raid killed at least five pro-Iranian fighters and wounded others. The nationalities of the people killed were not immediately known.

According to the Observatory and Syrian media reports, the strike targeted advanced weaponry and ammunition depots belonging to Hezbollah, Iranian forces and allied militias.

There was no comment from the Israel Defense Forces, in line with its policy of only publicly acknowledging strikes that are in response to attacks from Syria.

The targets of the strike were all located in areas known to host Syrian air defenses as well as arms warehouses.

Israeli officials have expressed increasing concern over the proliferation of Iranian-made surface-to-air missile systems in Syria, as well as the Syrian military’s improved air defense capabilities, which have made it more difficult for the IDF to operate over Syria. (Click Here)

Israel has carried out hundreds of airstrikes inside Syria over the course of the country’s civil war, targeting what it says are suspected arms shipments believed to be bound for Lebanon’s Iran-backed Hezbollah terror group, which is fighting alongside Syrian government forces.

On Monday, Syrian media said Israeli missiles struck targets connected to the Hezbollah terror group on the outskirts of the town of al-Baath as well as other locations in southern Syria.

The three sites were all reportedly connected to Hezbollah’s so-called Golan File, its efforts to establish a front along the Golan border from which it can carry out attacks against Israel.

According to Syrian media, two of the sites were observation posts used by the Lebanese terror group, while the third target was a site just next to a Syrian military facility that Israel has long claimed was working with Hezbollah, the offices of Cpt. Bashar al-Hussein, commander of a reconnaissance company in the Syrian army’s 90th Brigade.

Later on Monday morning, in a tacit threat, the Israeli military reportedly dropped leaflets in the Syrian Golan mentioning Hussein by name and warning Syrian troops to avoid cooperating with Hezbollah. The IDF did not immediately confirm dropping the fliers, but the pages were marked with the eagle symbol of the Israeli military’s 210th “Bashan” Division, which defends that area of the border with Syria. (Click Here)

The alleged attack on the sites near Damascus comes a week after Israel said it received a green light from Russian President Vladimir Putin to keep up its airstrikes in Syria.

Prime Minister Naftali Bennett and Putin agreed during a meeting in Sochi last week that the two nations would continue to implement the so-called deconfliction mechanism that works to prevent Israeli and Russian forces from clashing in Syria, a senior Israeli official said. 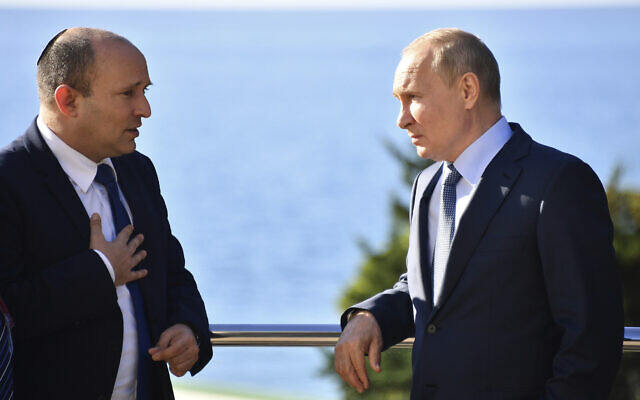 “The prime minister presented his world view on ways to stop Iran’s nuclear drive and Iran’s entrenchment in Syria,” he said in a statement. “It was decided to keep policies vis-à-vis Russia in place [regarding airstrikes in Syrian territory],” said Housing Minister Ze’ev Elkin, who accompanied Bennett to act as a translator and adviser.

Russia, a close ally of Syria’s Bashar Assad, has forces based and operating in Syria, and also provides Syria with the air defenses used against Israeli jets and missiles.