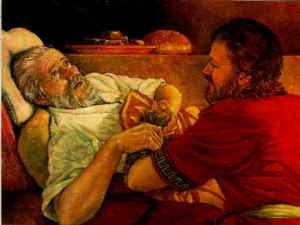 Live Where I Tell You

I said recently that the only thing that has been constant in my life through the past years has been change. However it has not been the kind of change that we were told last year to simply hope for. The change I have seen has been one which I am confident has come from One who states to me that if I follow Him, He will direct my every step along the way. Many of you can relate to these statements as well. Your lives have and in fact continue to be filled with change.

In the midst of what can seem on the surface to us turmoil and even confusion regarding these changes, we can all take the words of Genesis 26:2 to heart. The setting for these words is that the world around Isaac was in famine. There was uncertainty of where he would get enough food to feed his family. He began to look to the horizon and to the natural in order to provide for his growing family. Before he began his first step though, he was stopped in his tracks by words which told him to live right where he had been told to live. He was not to look to the horizon for his provision, but rather to look up for his provision. He was being told that if he would look to the Elohim of his father Abraham instead of his own strength, he would never go without. We see in the verses that follow that though he also pulled the same stunt regarding his wife that his father had, he did in fact follow the words spoken to him and was richly blessed because of it.

So what is the message to us within these words? Do they mean that we are to stay within the situation both naturally and spiritually that we are in right now? I think not. Look at the words again. They say “Live where I tell you.” The question that we should all be asking Him then is, “Where is He telling us to live?” Of course our minds will immediately think of our natural surroundings first, but this is the wrong place to begin.

To answer the question, we should look at the spiritual side first. Where is He asking us to live spiritually? Is it not within the guidelines the Torah gives us? This is a very easy principle to put into practice considering the season we are approaching. It may surprise many of you, but there are those who are reading this commentary today that are still considering what to do for Christmas. They are making plans to live in the practices of this pagan holiday. To those who are doing so, I must ask you the question posed to Isaac, “Where are you told to live?” Have you been told to live in pagan practices or have you been called out to live a life separate and unto Him? Of course, we could spend all day picking on Christmas and make most of us feel really good about ourselves, but what about other areas of life? How are we doing regarding living within the guidelines of Torah which He has told us to live? Are we continually looking to the horizon of man- made solutions to problems and turmoil in life, or are we looking to Torah? Do we have one spiritual eye on Torah, but the other eye on something else, just in case He does not come through in time?

In the natural there is so much upheaval in the world around us today. Yah is in the midst of positioning His family, I believe. Many people are being told to uproot everything they have ever known and take a walk of faith similar to that which Isaac’s father Abraham had told him about so many times. When the famine came in the place Isaac was living in, he did just what his father had done during his life. He wanted to move somewhere else. But the message to Isaac was very clear. He was told to not follow the life of another man, but rather to follow the Elohim of that man. He was taught not to duplicate the life of his father, but rather to trust the One who directed that life. He was told to live where He was telling Isaac to live, not to look to where his father had lived.

Today, we too are on a walk similar to Isaac. No one has ever done this before. We must each learn to live where He tells us. We must understand however that it is the spiritual living that has to come first. That spiritual life is found within the pages of His voice called Torah. If we will learn this, then where He tells us to live in the natural and how He tells us to get there will be a piece of cake, or maybe we should say a piece of matza.