(Natural News) As we now sit in one of the coldest “chill waves” in America’s history, with NYC poised to break the record for the coldest New Year’s Eve ever, it’s noteworthy to recall how all the “climate change” experts used to be global warming alarmists.

Just a few years ago, these global warming experts told us that winter temperatures would get steadily warmer. Snowfall would decrease, and the Earth would become so warm that the ice caps would melt and inundate coastal cities under a tidal wave of rising ocean levels. In reality, however, snow cover has continued to increase since the 1950s, but this didn’t stop mainstream media fake news rags like Newsweek from claiming exactly the opposite.

The IPCC also pushed the global warming narrative in 2001, and Al Gore and other global warming alarmists heaped on terror-scale warnings about melting ice that would drown cities like New York and Miami (as if liquid water instead of frozen ice is somehow bad for the planet…).

When the scientific data didn’t fit their narrative, of course, they faked the data. Nearly all the data used for so-called “global warming” projections, it turns out, had been dishonestly altered in order to create a “warming trend” where none exists at all. In another example of science hucksterism, global warming alarmists have been caught red-handed faking sea level data in order to falsely support their “rising oceans” narrative. As explained by the NoTricksZone website:

In a new paper published in Earth Systems and Environment this month, Australian scientists Dr. Albert Parker and Dr. Clifford Ollier uncover evidence that Permanent Service for Mean Sea Level (PSMSL) overseers appear to have been engaging in the “highly questionable” and “suspicious” practice of adjusting historical tide gauge data to show recent accelerated sea level rise where no such acceleration (or rise) exists.

The authors expose how PSMSL  data-adjusters make it appear that stable sea levels can be rendered to look like they are nonetheless rising at an accelerated pace. 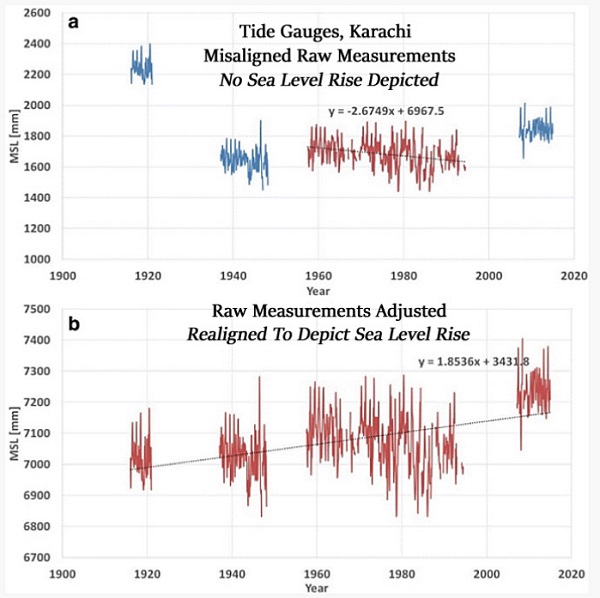 This adjustment of tide gauge data to yield a rising sea level trend where none exists is not occasional or episodic.  Instead, for every adjustment of raw data analyzed, “the adjustments are always in the direction to produce a large rise in sea level.”

The suspicious perpetuity of this pattern strongly suggests that there is an agenda driving these arbitrary and subjective realignments.

The problem with the global warming narrative, of course, is that it contradicted the scientific evidence which clearly showed the Earth wasn’t warming as had been frighteningly predicted by apocalyptic global warming alarmists. So they changed the narrative to “climate change,” which is now recognized as one of the most stupid-headed science fails of all time, given that Earth’s climate has always demonstrated rapid change, long before modern humans arrived on the scene. Perhaps that’s why over 31,000 scientists now say global warming is a complete hoax.

Now, thanks to the climate change hoax narrative, a shockingly high percentage of liberals actually believe that there were no forest fires, no hurricanes, no tornadoes, no floods, no droughts and no snow storms before the invention of the combustion engine (and the subsequent burning of fossil fuels). No one has ever told them, for example, that carbon dioxide levels have been over ten times higher than today’s levels throughout Earth’s history. Because of the Left’s runaway science denialism, college students have also been taught that carbon dioxide is a poison rather than plant food. In truth, nearly all plants on Earth consume carbon dioxide as a critical nutrient. Higher CO2 means more rainforests, faster growth of food crops and more “green” planet-wide. Yet stupidly, Leftists have been brainwashed to believe that CO2 is toxic to the planet. (Which just goes to show you how liberalism can convince some people that 1+1 = 5.)

Remember all this as you’re freezing this winter. Also remember that before there was global warming, the status quo nut jobs in the media (and scientific community) were all pushing a “global freezing” narrative. In 1970 the global warming crowd painted an apocalyptic picture of what would happen by the year 2000.

“1) At the first Earth Day celebration, in 1969, environmentalist Nigel Calder warned, “The threat of a new ice age must now stand alongside nuclear war as a likely source of wholesale death and misery for mankind,’” writes RightWingNews.

This hysteria and apocalyptic fear mongering reminds many of the 1970 Earth Day predictions that fizzled like a firecracker:

That article also lists the top 10 Al Gore predictions that collapsed in the wake of reality:

10 years after Al Gore’s “Inconvenient Truth” guilt/fear producing predictions, let’s close by examining just how accurate his “science” proved to be on his way to the bank.

8. Temperature Increases Due to CO2 – no significant rising for over 18 years.

9. Katrina a Foreshadow of the Future – false – past 10 years, no F3 hurricanes; “longest drought ever!”

10.The Earth Would be in a “True Planetary Emergency” Within a Decade Unless Drastic Action Taken to Reduce Greenhouse Gasses – never
happened.

As you’re freezing your buns off this Winter, just remember how many global warming charlatans told you the Earth was “warming”

As any rational person has come to realize by now, the global warming narrative was (and is) a complete hoax. The fact that 75% of the continental United States is right now experiencing plunging temperatures is yet another contradiction of the “warming” we were all told would have practically ended Winter by now.

Instead of the warming we were promised by Al Gore, we’re actually getting subzero chills across much of the country. The National Guard has even been mobilized in some areas to deal with the extreme cold and snow fall. How is this possible if the Earth has been “warming” for a couple of decades as Al Gore promised?

As it turns out, Al Gore was lying all along. And in much the same way the left-wing deep state tried to fabricate evidence against Trump (the “Trump Dossier”) to destroy his administration, the left-wing branches of science are faking all the climate science to create a completely false, fabricated “warming trend” that simply doesn’t exist. If the oceans really were rising, after all, scientists wouldn’t have to keep faking the ocean levels data, would they?

Keep all this in mind as you’re trying to stay warm this Winter. You’ve been subjected to a world-class science swindle of epic scale. Carbon dioxide isn’t a planetary poison. Even the EPA chief has now admitted CO2 isn’t the cause of global warming. Ocean levels are not rising at a catastrophic pace, and NASA has even confirmed that ocean levels have been falling for the last two years in some areas. Arctic ice sheets are actually expanding right now, not contracting, and the UN climate change report is now widely recognized as a work of fiction.

Every single thing that status quo science has claimed about climate change has been exhaustively debunked. It was all a farce from the get-go. (Click to Source)

Watch my video below to learn more: