Idolatry and the Occult have taken over this country. Few know Jesus Christ as their Lord and Savior. This country is in trouble.

You can help us end addiction

Iranian authorities have posed U.S. Pastor Saeed Abedini with an ultimatum to deny Christ, or spend more time in prison.

“Deny your faith in Jesus Christ and return to Islam or else you will not be released from prison. We will make sure you are kept here even after your 8 year sentence is finished,” the authorities said, according to a letter by Abedini  that was recently obtained by the American Center for Law and Justice.

The pastor, who was sentenced to eight years in January in what the law group says was a “sham trial” that targeted him for his Christian faith, had earlier shared of some of the abuse he faced in prison in a letter to his wife, Naghmeh Abedini, and their two children. He has stated that he will not abandon Christ in the face of such persecution. But the newly released letter reveals the specific threats the authorities have made against him in Evin Prison in Tehran.

“My response to them is Romans 8:35-39. The reality of Christian living is that difficulties or problems do arise in our lives. Persecution and difficulties are not new occurrences, but are seen often in the Christian life. It is through the suffering and tribulations that we are to enter the Kingdom of God,” the U.S. citizen said in his letter.

The ACLJ, which is representing the pastor’s family back in the U.S. and has been at the forefront of campaigning for Abedini’s release, commended the pastor for his strong faith in the face of mental and physical abuse.

“My hair was shaven, under my eyes were swollen three times what they should have been, my face was swollen, and my beard had grown,” Abedini wrote in a letter in March. “The nurse would also come to take care of us and provide us with treatment, but she said in front of others ‘in our religion we are not suppose to touch you, you are unclean. Baha’i (religion) and Christians are unclean!’ She did not treat me and that night I could not sleep from the intense pain I had.”

The U.S. State Department, Secretary of State John Kerry and the European Union have all called for the pastor’s release, and over 550,000 people worldwide from over 180 countries have signed a petition lending him support.

“Pastor Saeed is refusing to deny Christ. We must let him know that we will never forget him and will never stop working for his release,” the ACLJ has said.

The law group also started a letter-writing campaign for Abedini’s birthday on May 7, hoping that all the notes will “flood” Evin Prison. Those who wish to add their letter to the 20,000 already written can do so by going to SaveSaeed.org.

Change the lives of people in addiction, while finding the purpose of your own.

An American-Iranian pastor imprisoned in Tehran since September may face hanging because of his Christian faith. Saeed Abedini sent a letter to his family Jan. 10 detailing his torture and treatment by Iranian authorities.

Jordan Sekulow, the executive director of the Washington-based American Center for Law and Justice (ACLJ) wrote to the The Jerusalem Post on Friday, “This is an extremely critical time for American Pastor Saeed and his family. We now know with certainty, from his own words, the brutality and life-threatening danger he faces in Iran’s notorious Evin Prison.”

“In a powerful letter from him released to family members in Tehran, Pastor Saeed reveals that he is undergoing beatings and is being told that he ‘will hang’ for his Christian faith. That treatment combined with the recent news that Pastor Saeed’s case has been turned over to one of Iran’s ‘hanging judges’ makes his circumstances more dire than ever,” Sekulow said.

Abedini became an American citizen in 2010 after marrying his American wife, Naghmeh Abedini, according to FOX News.

The Iranian government does not recognize his American citizenship, though it had enabled him to travel freely between both countries until this past summer. That’s when he was pulled off a bus and placed under house arrest, according to his supporters. Abedini was then imprisoned and charged with several crimes that have not been made public, but it is widely believed that it is because of his Christian faith.

Jihadists and allies of the ruling mullahs target Christians living in Iran.

Dr. Wahied Wahdat-Hagh, an expert on Iran who has written extensively on the persecution of Christians in the Islamic Republic, told the Post on Saturday, that Abedini’s case was “an example of the insidious and perfidious policy of the Islamist dictatorship” in Tehran, adding that “the main goal of the rulers is to intimidate Christians and Iranians who are interested to leave Islam and change their religion.” […]

“The Iranian Revolutionary Guard Corps and representatives of Islamic Jihad even play the role of pastors in churches in Isfahan to “guide” the Christians and teach them that Islam is better,” Wahdat-Hagh stated. 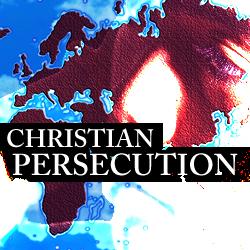 Christians are rapidly disappearing from the region of Jesus Christ’s birth – the modern Middle East – and are being persecuted in many other regions of the world where their religion is viewed as “Western” and foreign.

The new study, reported Sunday by the British Telegraph newspaper,warns that Christians suffer greater hostility across the world than any other religious group. It also claims politicians have been “blind” to the extent of violence faced by Christians in Africa, Asia and the Middle East.

The most dangerous threat to the religion is militant Islam, the report by the think tank Civitas says, because oppression in Muslim countries is often ignored because of a fear that criticism will be seen as “racism”.

Converts from Islam face being killed in Saudi Arabia, Mauritania and Iran and risk severe legal penalties in other countries across the Middle East, the report says: “It is generally accepted that many faith-based groups face discrimination or persecution to some degree.

“A far less widely grasped fact is that Christians are targeted more than any other body of believers,” the study adds.

The study also estimates that 200 million Christians, or 10 per cent of Christians worldwide, are “socially disadvantaged, harassed or actively oppressed for their beliefs.”

“Exposing and combating the problem ought in my view to be political priorities across large areas of the world. That this is not the case tells us much about a questionable hierarchy of victimhood,” the author, Rupert Shortt, a journalist and visiting fellow of Blackfriars Hall, Oxford, tells the Telegraph.

He adds: “The blind spot displayed by governments and other influential players is causing them to squander a broader opportunity. Religious freedom is the canary in the mine for human rights generally.”

The report, entitled Christianophobia, highlights a fear among oppressive regimes that Christianity is a “Western creed” which can be used to undermine them. 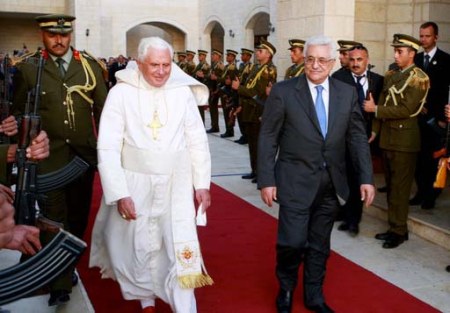 The Vatican hailed the United Nations’ implicit recognition of aPalestinian state on Thursday and called for an internationally guaranteed special status forJerusalem, something bound to irritate Israel.

The 193-nation U.N. General Assembly overwhelmingly approved a resolution to upgrade the Palestinian Authority’s observer status at the United Nations from “entity” to “non-member state,” the same status as the Vatican.

“The Holy See welcomes with favor the decision of the General Assembly by which Palestine has become a Non-member Observer State of the United Nations,” a statement said.

But it also said it was a “propitious occasion” to recall a “common position” on Jerusalem expressed by the Vatican and the Palestine Liberation Organisation when the two sides signed a basic agreement on their bilateral relations in 2000.

Thursday’s statement called for “an internationally guaranteed special statute” for Jerusalem, aimed at “safeguarding the freedom of religion and of conscience, the identity and sacred character of Jerusalem as a Holy City, (and) respect for, and freedom of, access to its holy places.”

The Vatican’s re-stating of its position on Jerusalem, which has remained mostly dormant for years, was bound to irk Israel, which says there is no need for an international status for Jerusalem because those guarantees already exist.

Israel declared Jerusalem its “united and eternal” capital in 1980 after annexing East Jerusalem in the Six Day War in 1967. World powers have not recognized the annexation.

Palestinians want East Jerusalem to be the capital of an eventual state.

Israel has always resisted the concept of any form of international mandate over Jerusalem.

It has been some time since the Vatican re-stated its position on the city so forcefully, and Thursday’s statement was bound to be received negatively by Israel, a diplomat with direct knowledge of their relations said.

Israel has always maintained that it already guarantees the city’s special nature as sacred to the three great monotheistic religions – Christianity, Judaism and Islam.

Thursday’s statement called on both sides to seek an “effective commitment to building peace and stability, in justice and in the respect for legitimate aspirations, both of the Israelis and of the Palestinians.”