The people have had enough draconian policies and heavy taxation. At least according to the latest Census data.

The Census Bureau has released its latest state population data charts and its bad news for tax heavy states. The latest data shows that populations are shrinking in states that have heavy-handed tax policies in place. In other words, people are migrating from tax heavy states into more tax-friendly states.

The Cato study used 2016 IRS data to measure the extent of the migration. It confirms that people are fleeing states such as Connecticut, California, New York, New Jersy, and Illinois. Where are they moving to? To tax friendlier states such as Florida, Nevada, Idaho, Tennessee, and South Carolina.

The below chart breaks down just how drastic the taxation migration is. In the chart, blue dots represent states. The vertical line represents the Census net interstate migration figure via a percent of 2017 population per state. The horizontal line shows state household taxes as a percent of 2015 personal income.

Well, states with a high taxation rate, found on the right, have a net out-migration. This means more people are leaving these states than taking up new residences. The farthest right blue dot is New York, a state that taxes its people 13%. It’s losing the most people in this mass taxation migration.

The most influential number in the chart seems to be 8.5%. States with a taxation rate less than 8.5% are growing, while those with taxation rates north of 8.5% are shrinking.

Here’s a look at tax rates per state.

Mass Migration May Be Influenced By Various Policies

But the data might be slightly flawed. States with the heaviest taxation rates are typically states with numerous other draconian policies. For example, California, Illinois, New Jersey, and New York all have restrictive gun laws in place. New Jersey, California, and New York are all moving towards restrictive mandatory vaccine laws. California passed the country’s most restrictive mandatory vaccine law just two years ago. Each state is ran by prominent and influential Democrats looking to implement socialist policies.

In California, a high-rent crisis has left many middle-class residents to sleep in their cars. In San Fransisco, residents report growing concerns over feces and “zombies” wandering BART stations. New Jersey recently banned state-sponsored travel to states that support the NRA.

Is the migration a result of taxation, or a blend of numerous Democratic policies? Most likely, the latter.If these states want to grow population, they’ll need to channel moderate positions from policymakers. The problem is, the Democratic party no longer supports or rewards candidates for moderate viewpoints.

The bigger issue is that the same people who vote in draconian policies and consequently flee them, vote for the same policies in their new states. “Red states” may turn blue over time. Remember, California was at one time a Republican ran state. Worse more, Republicans are no longer the party of lower taxes. They’ve taken advantage of extremist left positions that tend to conceal their own shift towards leftist tax policies.

It’s not unusual for business owners to donate to Democratic candidates in their home states while moving their businesses to tax-friendly states. The consequences of such hypocrisy may turn more devastating than we think. (Click to Source)

Flooding in the Midwest is posing a risk of contamination to more than 1 million private wells that supply drinking water to rural areas in the region, The Associated Press reported Tuesday.

The AP reported that the National Ground Water Association, a trade group, said there are 1.1 million private wells in 300 flooded counties across 10 states in the Midwest.

Those states are Illinois, Indiana, Iowa, Kansas, Kentucky, Minnesota, Missouri, Nebraska, South Dakota and Wisconsin, according to the AP.

Flooding creates the possibility that water from the flood will get into the wells and contaminate the water. 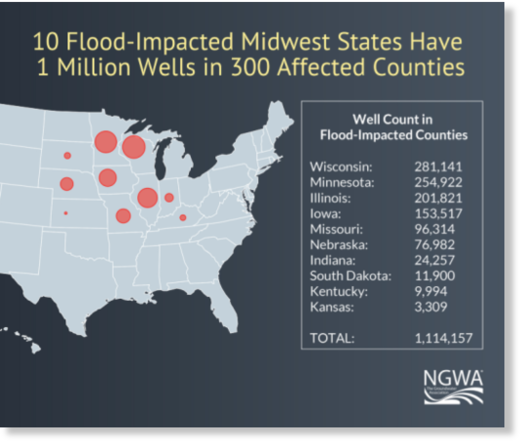 Flooding creates the possibility that water from the flood will get into the wells and contaminate the water.

Liesa Lehmann, the private-water section chief for the Wisconsin Department of Natural Resources, told the AP that any wells within a flood area “are certainly going to be vulnerable to contamination.”

“Anyone who has a private well within a flood plain area of a major river, those wells are certainly going to be vulnerable to contamination,” Lehmann said.

Lehmann added that well owners should assume that their drinking water is contaminated if they see floodwater near or over their wells.

Chuck Job, the National Ground Water Association’s regulatory affairs manager, told the AP that when the flooding is over, the well water should be pumped out and the well should be disinfected. The water should then be tested to ensure that it’s safe to drink, Job added. (Click to Source)

With more than half of U.S. states experiencing high levels of flu-like illness — and flu activity continuing to rise, ERs across the country are seeing a surge in business — and some are struggling to keep up.

Currently, 29 states and New York City are reporting high levels of influenza-like-illness (ILI), and another nine states are reporting moderate levels of ILI. This season, 18 children have died from flu-associated deaths.

This year’s predominant flu (76 percent) is very similar to a type that caused a severe season in 2003-2004, when the flu shot wasn’t a good match and there were more than 40,000 associated deaths, said Dr. Marc Siegel, a member of the Fox News Medical A Team.

Illinois has been hit the hardest, according to the Illinois Department of Health; and 11 Chicago-area hospitals are now on bypass status, meaning they are so swamped with flu patients, they have to turn sick people away.

Melaney Arnold, spokeswoman for the Illinois Dept. of Health, said nearly 150 people have been admitted to intensive care units with the flu this season, and five have died.

Northwestern Medical Center in Chicago is one example of a hospital on bypass status. So if you’re in an ambulance because you have the flu, this hospital will have to turn you away. That doesn’t mean people can’t walk in there and still get treatment if they’re OK to do so, but it’s going to be a long wait.

The Advocate Good Samaritan Hospital in Downers Grove, Ill., reported that its emergency room has up to a three-hour wait, and a Good Samaritan doctor described the situation as “chaotic.”

“It’s not like you can just see them and out the door they go. They’re here for a while unfortunately, getting treatments,” said Dr. Tom Mullin of Good Samaritan. “Most of them we can fortunately discharge them home and treat them as an outpatient. But, it’s wreaking havoc on every emergency department in the city and the suburbs, I’ll tell you that.”

Mary Anderson, infection control manager at Edward Hospital in Chicago, said the hospital normally sees an average of 200 cases per season. But as of last week the hospital already has seen more than 260 confirmed cases.

In Rockville, Md., emergency room visits are up 20 to 50 percent, according to Dr. Michael Kerr, chief of staff and chairman of the department of Emergency Medicine at Medstar Montgomery Medical Center in Olney, according to wusa9.com

. Kerr said the problem is area-wide, and extra doctors and nurses are on-hand to deal with swamped waiting rooms.

In Pennsylvania, Lehigh Valley Hospital-Cedar Crest has set up a ‘flu tent’ to treat the overwhelming amount of patients coming through, according to nbcphiladelphia.com.

Terry Burger, hospital director of infection control at Lehigh, said, “If we can remove them from the main ED and put them in environment where everyone is masked and everyone can be protected, it’s safer for them and certainly safer for the staff.”