According to this September 27th story over at WTOP News in Washington DC, it’s nothing less than ‘foreign disinformation’ that is driving the continuing ‘vaccine resistance’ here in America.

Reporting within their story that a website allegedly based in the UK, that ‘strangely‘ had a CEO and most of its employees living in Moscow, was offering people ‘compensation’ to disparage US vaccines, they allegedly offered one ‘social media influencer‘ money to say online that Pfizer vaccines were killing people.

Yet in that ‘blame Russia for the decisions of unvaccinated Americans‘ strategy, we see the globalists ‘go-to’ once again, just as they reported following the 2016 election that the ‘independent media’, including us here at ANP, were part of a vast Russian propaganda network which aimed to prevent Hillary Clinton from getting into the White House.

With the NY Times reporting back in 2017 in this story titled “The Fake Americans Russia Created to Influence the Election” another story put out by the MSM blaming ‘foreign influence‘ on the decisions made by Americans (in that case voting for President Trump in 2016 over Hillary), the fact that the MSM is now reverting to ‘blame the Russians’ for the health decisions made by Americans is another hint of what’s ahead.

Because with the real ‘biggest vaccine dissenters’ in America being blacklisted and censored, with Dr. Joseph Mercola, Robert F. Kennedy Jr. and Erin Elizabeth, the founder of the website Health Nut News and Dr. Mercola’s girlfriend, all being attacked.by the ‘growing increasingly desperate’ White House, the fact that Youtube recently removed many anti-vax videos and their presenters, calling what they’ve been reporting ‘misinformation’, is another sign that ‘truth’ is being turned into ‘treason’ in the globalists ’empire of lies’.

And with California Representative Adam Schiff recently hinting that the ‘globalists war upon truth’ is only just beginning, with Schiff tweeting “YouTube’s curbing of anti-vaccine content is a strong first step. But this doesn’t mark the end of our fight against deadly misinformation. These policies must be enforced. And we must keep pushing for other companies to follow suit. What do you say, @Amazon and @Facebook?”, the globalists clearly seek to control the flow of all information in the free world.

Taking a tip from Russia which is escalating its own campaign to ‘control the internet’, imagine the kind of internet we’d have if the only information we were ‘allowed’ to read was pro-state, pro-vaccine content, with all reports of the ‘adverse events’ being triggered by ‘the vax’ were completely deleted online, ‘memory holed’ by the ‘Ministry of Truth’ like in George Orwell’s classic “1984”.

Well thankfully, even some of those in the mainstream media are speaking out against Dr. Anthony Fauci and Joe Biden’s ‘the vax is safe and ‘the answer to COVID’ agenda’ as reported in this CNBC story. The excerpt below comes to us from this Gateway Pundit story reporting on that CNBC/Fauci interview.

Dr. Fauci on Friday was grilled on CNBC about so-called Covid ‘breakthrough’ cases.

“Dr. Fauci, you guys have been pushing the vaccine and I understand why – I’m vaccinated, but I also have Covid and it spread through my entire family in the past few weeks,” CNBC host Sara Eisen said from her home office.

She continued, “And I just wonder about the public messaging around vaccinations. Three vaccinated people got Covid in my house, two unvaccinated children got it. Are you too casual about the limitations of the vaccine? Because it does feel to me that breakthroughs are happening, they’re happening regularly and we haven’t really seen the government pay much attention to them or warn about them!”

Because if more people knew that they can be ‘fully vaxxed‘, yet still get COVID, pass on COVID, and die from COVID, how many unvaxxed people would even consider getting the shot? As Senator Ron Johnson recently warned as heard in the 1st video at the bottom of this story, data proves that 63% of the UK’s ‘Delta deaths’ in the last 7 1/2 months were among the ‘fully vaccinated’. How that’s vax working out for you, UK? And they’re ‘mandating’ a shot that doesn’t work in America! No thanks, Joe.

And while the globalists attempt to divide Americans into two different ‘camps’ on the ‘vax’, the ‘vaccinated’ and the ‘unvaccinated’, it appears they’ve bitten off much more than they can chew.

Because while the radical left attempts to paint ‘vaccine resisters’ as President Trump voters, those living in rural areas of America and ‘the uneducated’, Black Lives Matter is going after ‘vaccine mandates’ in New York, claiming a whopping “72% of black people in this city, from ages 18 to 44 are unvaccinated”

With Chivona Newsome, the co-founder of ‘Black Lives Matter Greater New York,’ recently joining Rebel News’ Andrew Chapados to explain why she’s opposed to vaccine passports and mandates, we see a great example of the ancient proverb “The enemy of my enemy is my friend” playing out before our eyes.

Seen also in Nicki Minaj fans in Atlanta, Georgia inviting President Trump supporters to march against the CDC and their own vax mandates, imagine the power of two groups once thought of as ‘foes’ working together to take down ‘medical tyranny‘ in the days ahead, our ‘common enemy’.

With BLM’s Newsome warning of the very real possibility of unvaccinated black Americans being ‘rounded up‘ in the days ahead just for refusing to take the mRNA injection, we remind her that we’re already seeing just that in Australia with white Australians and black Australians being rounded up and incarcerated for refusing the injection, (along with red-skinned, blue-skinned and pink-skinned Australians for that matter, with true tyranny not caring about the color of one’s skin!)

So imagine how the globalists tone and actions might change once they realize that millions of Americans of all different skin colors, backgrounds and education levels are coming together to fight against their ‘medical tyranny’! 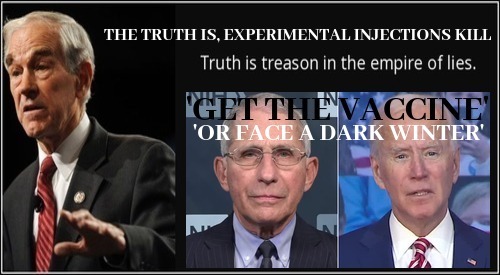 But as we’re warned in these last two stories we’ll be taking a look at, the 1st from WVW in New York titled “CDC claims it has authority to use police to do everything you see going on in Australia; and Congress agrees,” while the 2nd one was from the Rutherford Institute titled “COVID-19 Detention Camps: Are Government Round-Ups of Resistors in Our Future?”, Americans are quickly being herded the way of Australia if the tyrannical left gets their way.

With John B. Whitehead and Nisha Whitehead at the Rutherford Institute warning “It’s no longer a question of whether the government will lock up Americans for defying its mandates but when”, imagine what happens to America’s inner cities when black Americans are thrown into ‘concentration camps’ for simply controlling what’s put inside of one’s own body.

Warning also “This is what we know: the government has the means, the muscle and the motivation to detain individuals who resist its orders and do not comply with its mandates in a vast array of prisons, detention centers, and FEMA concentration camps paid for with taxpayer dollars. It’s just a matter of time”, those who think such a scenario impossible here in America need to read this WVW story.

With that WVW story reporting of the globalists that “If they believe they can get away with it, they will do it”, we see the globalists vision of a ‘new Amerika’ is exactly why Americans continue to arm up in record numbers, with the 2nd Amendment never put into the US Constitution to ensure Americans could go ‘deer hunting’ but to ensure we’d never live under tyranny. From this WVW story.

We’ve all seen the videos from Australia. Police chasing down and beating a helpless woman, shooting rubber bullets at construction workers who violate that country’s draconian lockdown rules. A 12-year-old girl gets pepper sprayed for not wearing a mask.

Do not be fooled into thinking this is just an Australian thing, never to happen in America.

Check out what’s going on in Israel, where IDF soldiers are being forcibly jabbed in the middle of the night. There have also been scenes from Canada caught on video, most notably the case of Pastor Artur Pawlowski, who was arrested and dragged off by a SWAT team in the middle of a busy highway, that would make you swear you are looking at the East German Stasi in action, not the Canadian police.

Everything the Australian, Israeli and Canadian governments are doing in terms of using force to brutally put down all resistance to their draconian mandates and restrictions are things the current regime in Washington not only wants to do but claims it has the legal authority to do.

Biden’s people admit he has been in discussions about closing down interstate travel to the unvaxxed and barring them from air travel. In the new Amerika, these are “privileges,” they tell us, not rights.

So, Americans need to prepare now for the day when the regime in Washington goes full Nazi. In fact, some are already describing the scenes in Australia as a civil war. Too bad the Aussies gave up their rights to own firearms years ago, because I truly believe Biden would have already launched similar crackdowns if he didn’t have the Second Amendment to contend with.

So while we’ll continue to work towards and pray for peace in the days, weeks and months ahead, especially with any kind of violence coming from ‘anti-vaxxers’ playing directly into the globalists hands and narrative, giving them a reason to go out and ‘crack down’ like tyrants love to do, history shows that once a country is transformed from a ‘free nation’ into ‘despotism’, it’s nearly impossible to be transformed back into what it once was. There is now no doubt that America, thanks largely to wisdom of America’s Founding Fathers in writing the US Constitution and specifically, the 1st and 2nd Amendments, is the last free nation standing. Barely. (Click to Source)