More and more details are emerging from multiple media covering the eruption in great detail. At 4:33 p.m., a second fissure opened, about 100 meters above the first one that opened at 3.15 p.m.

The Civil Guard has announced that 5,000 to 10,000 people will be evacuated from the municipalities of El Paso, Los Llanos de Aridane, Fuencaliente and Tazacorte, as the lava flows have begun to descend down the slope. The neighborhood of El Paraíso has already been evacuated.
Current projections of the lava flows predict they are likely to run through an area near the settlement of Montaña Rajada, following a ravine. “That worries us now,” said the mayor of El Paso, Sergio Rodríguez, when interviewed shortly after the onset of the eruption. The main concerns are that lava might reach inhabited areas such as La Laguna, in Los Llanos de Aridane: “The problem is further down, in the Los Campitos area. The lava is advancing slowly. People can be evacuated with relative ease,” he explained. (Click Here)

As of now, local press indicates that at least 1,400 people have already been transferred to the El Paso soccer field. In the same municipality lava has already begun to destroy some homes late in the afternoon.

Lava cuts roads, airport closed
The lava flows already crossed the Tacande highway at around 5.30 pm, making the passage of vehicles impractical. La Palma airport has also been closed during the first hours after the eruption, as ash plumes hindered visibility, but later resumed its operations as the ash emissions decreased again.
The alert status of the volcano was raised orange (3 out of 4), and the General Directorate of Security and Emergencies of the Government of the Canary Islands activated the level 2 emergency situation (red traffic light), in application of the Volcanic Risk Plan (Pevolca). 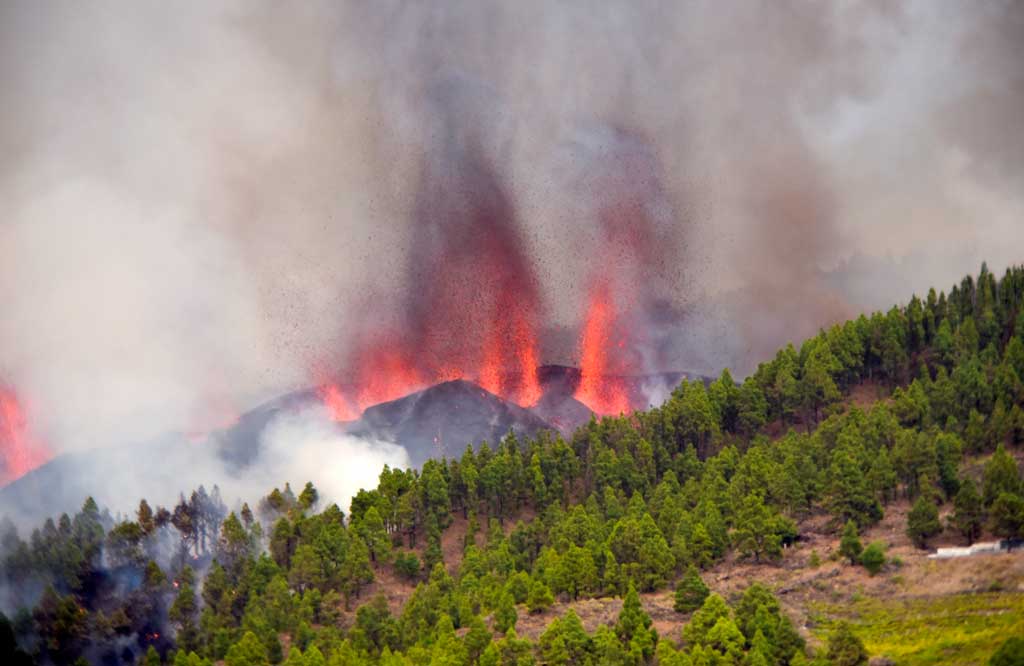 The eruption site on La Palma’s Cumbre Vieja volcano this afternoon (image: EFE/ Miguel Calero)The La Cumbre Vieja volcano finally erupted after 8 days of intense seismic crisis this afternoon at 3.15pm. At least two eruptive fissures opened in the area of the Montaña Rajada mountains, located in the municipality of El Paso, and started to erupt spectacular lava fountains from at least 7 individual vents.
Particularly in the beginning of the eruption, the opening of the vents was accompanied by strong explosions generating dense ash plumes as the ground opened to give way to the lava shooting out from underneath. The area of the eruptive fissure is an unpopulated forersted mountain zone, and some forest fires were ignited, but quickly controlled. There are no reports of damages. People are advised to avoid the area. Prior to the eruption, around 50 people with reduced mobility had already been evacuated from nearby areas, and more evacuations are now in progress.
This marks the first volcanic eruption on the island since 1971. The volcano had been quiet until 2017 when earthquake swarms started to appear from time to time, sign of magma slowly accumulating in its deeper reservoirs. The last before the recent crisis was in December last year.
So far, the eruption is relatively small and the lava flows were reported to advance rather slowly, but it is possible that it might intensify. In an article on El País, Nieves Rosa Arroyo Díaz, the island chief of security and emergencies is quote: “the lava is coming down slowly, but we are worried about the speed it could pick up. … There is an outbreak of fire, but it is being controlled.”
Spanish Prime Minister Pedro Sánchez changed his original plan to fly to New York on Sunday and is expected to arrive in La Palma to address the situation with local authorities and the Defense Ministry. It is likely that an exclusion zone will be set up around the eruption site. Video: (Click Here)

Precursors
The eruption today did not come entirely as surprise. Intense earthquake activity – with more than 5000 small tremors detected in few days – had preceded it since Sep 11, as well as significant ground deformation with up to 15 cm uplift. On Sep 13, the volcano’s alert status was raised to yellow, because these phenomena could be seen as sign that magma had been accumulating at shallow depth. The yellow alert affected the municipalities of Fuencaliente, Los Llanos de Aridane, El Paso and Villa de Mazo, with around 35,000 people affected in total, according to El País.
A lull in activity during last Thursday to Friday was only to be replaced by renewed seismic activity that accelerated today. Still, it was probably not expected to go so fast from then on.
4 hours before the eruption, it culminated in a 3.8 quake at 11.16 am, which in hindsight is likely to have been the main event that opened a crack (or dike) towards the surface. In the hours before the eruption, volcanic tremor had been continuous and increasing as magma started to move until finally breaching the ground.

Update Sun 19 Sep 2021 15:09The eruption started at 3.15 p.m. local time (14:15 GMT), 10 minutes after our previous update when we noticed the strong increase in seismic activity.
Just before the eruption, authorities had started to evacuat about 40 people with mobility problems and farm animals from the area where most seismic activity had been. More evacuations are under way. 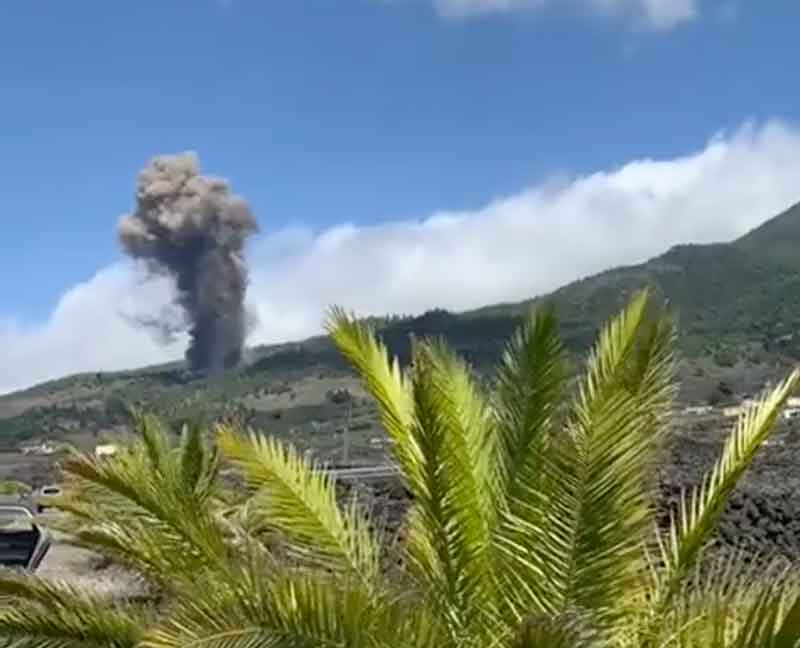 Image of the eruption immediately after it began (image: INVOLCAN / twitter)The eruption so far seems to be small and there is not much information available yet. The following video was taken immediately after a small vent opened, producing small lava fountains and an ash plume: (Click Here) 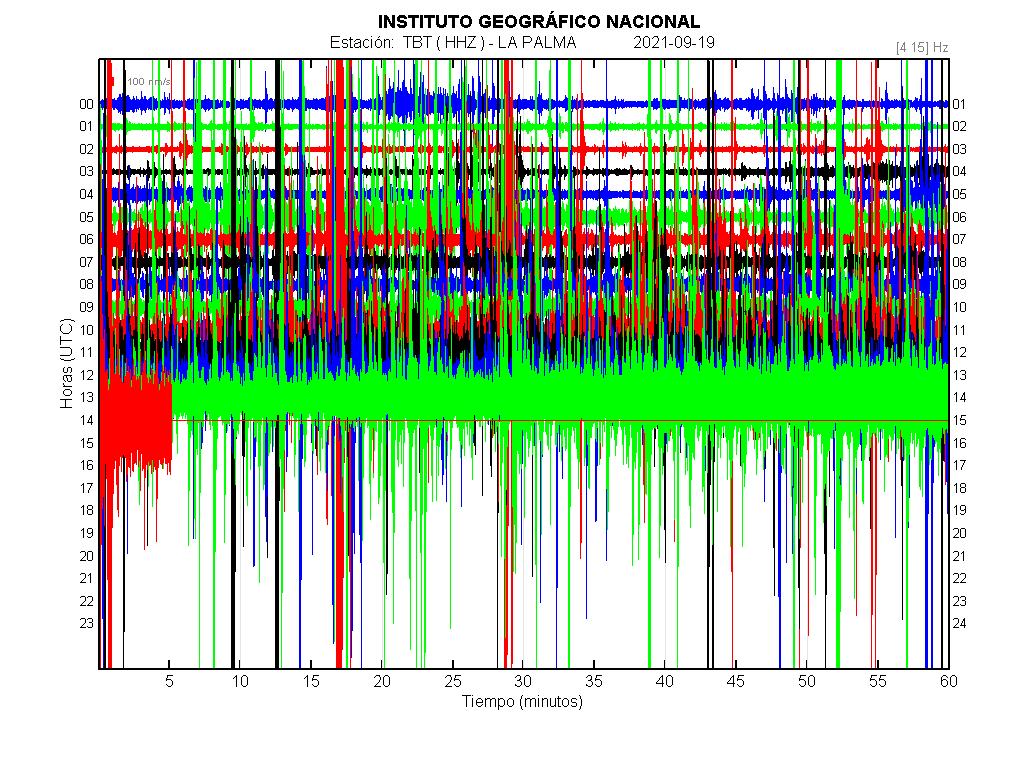 Increasing seismic activity on La Palma as the volcano erupted (image: IGN)Following the increasing seismic activity and the previously suspected beginning of tremor, the volcano erupted short time ago – probably much earlier than most expected.
There are not many details yet, but from initial pictures it seems that a fissure opened on the western flank of La Cumbre Vieja, feeding lava fountains and flows, burning forests and farmland.
In the meantime, seismic activity continues to increase by the minute, dominated by volcanic tremor, reflecting the flow of magma to the surface.