London (CNN Business)The vast network of ports, container vessels and trucking companies that moves goods around the world is badly tangled, and the cost of shipping is skyrocketing. That’s troubling news for retailers and holiday shoppers.More than 18 months into the pandemic, the disruption to global supply chains is getting worse, spurring shortages of consumer products and making it more expensive for companies to ship goods where they’re needed.Unresolved snags, and the emergence of new problems including the Delta variant, mean shoppers are likely to face higher prices and fewer choices this holiday season. Companies such as Adidas (ADDDF), Crocs (CROX) and Hasbro (HAS) are already warning of disruptions as they prepare for the crucial year-end period.

“The pressures on global supply chains have not eased, and we do not expect them to any time soon,” said Bob Biesterfeld, the CEO of C.H. Robinson, one of the world’s largest logistics firms.

The latest obstacle is in China, where a terminal at the Ningbo-Zhoushan Port south of Shanghai has been shut since August 11 after a dock worker tested positive for Covid-19. Major international shipping lines, including Maersk (AMKBY), Hapag-Lloyd (HPGLY) and CMA CGM have adjusted schedules to avoid the port and are warning customers of delays.

The partial closure of the world’s third busiest container port is disrupting other ports in China, stretching supply chains that were already suffering from recent problems at Yantian port, ongoing container shortages, coronavirus-related factory shutdowns in Vietnam and the lingering effects of the Suez Canal blockage in March.Shipping companies expect the global crunch to continue. That’s massively increasing the cost of moving cargo and could add to the upward pressure on consumer prices.”We currently expect the market situation only to ease in the first quarter of 2022 at the earliest,” Hapag-Lloyd chief executive Rolf Habben Jansen said in a recent statement.

The cost of shipping goods from China to North America and Europe has continued to climb over the past few months, following a spike earlier in the year, according to data from London-based Drewry Shipping.The company’s World Container Index shows that the composite cost of shipping a 40-foot container on eight major East-West routes hit $9,613 in the week to August 19, up 360% from a year ago.The biggest price jump was along the route from Shanghai to Rotterdam in the Netherlands, with the cost of a 40-foot container soaring 659% to $13,698. Container shipping prices on routes from Shanghai to Los Angeles and New York have also jumped.”The current historically high freight rates are caused by the fact that there is unmet demand,” Soren Skou, CEO of container shipping giant Maersk, said on an earnings call this month. “There’s simply not enough capacity,” he added.

The terminal shutdown in Ningbo will add to bottlenecks arising from the closure in June of Yantian, a port about 50 miles north of Hong Kong, after coronavirus infections were detected among dock workers.While a partial reopening of Yantian took only a few days, a return to normal services took nearly a month to achieve, according to S&P Global Market Intelligence Panjiva, as the congestion spilled over to other ports. 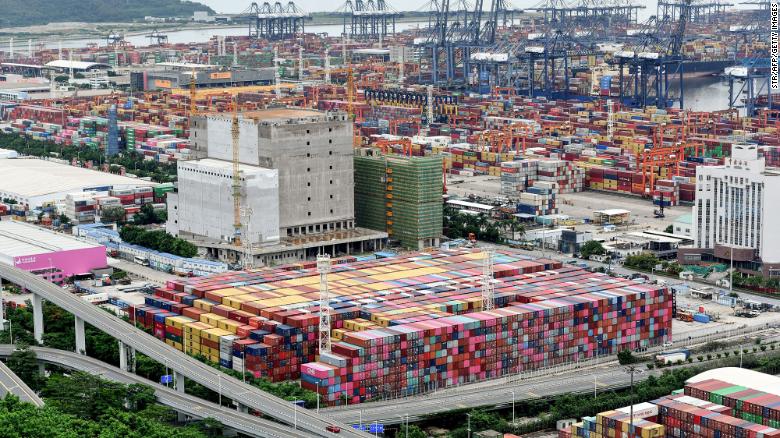 Cargo containers stacked at Yantian port on June 22 in Shenzhen, China.That spells trouble for retailers and consumer goods companies trying to restock inventories heading into the crucial year-end holiday shopping season. “The closure at Ningbo is now particularly sensitive as it may hold up exports for the peak season of deliveries into the US and Europe which typically arrive from September through November,” S&P Global Panjiva said in a research note on August 12.Drewry Shipping said Friday that congestion at nearby ports Shanghai and Hong Kong is “spiking” and spreading elsewhere in Asia, as well as in Europe and North America, “particularly the West coast” of the United States.Some 36 container ships are anchored off the adjacent ports of Los Angeles and Long Beach, according to a report Thursday from the Marine Exchange of Southern California.That’s the highest number since February, when 40 container ships were waiting to enter. Ordinarily, there would be just one or zero container ships at anchor, according to the Marine Exchange.The congestion in California is starting to spread to “pretty much every port in the [United States],” according to Biesterfeld of C.H. Robinson. “The chances of your vessel arriving on time are about 40%, when it was 80% this time last year,” he told CNN Business. 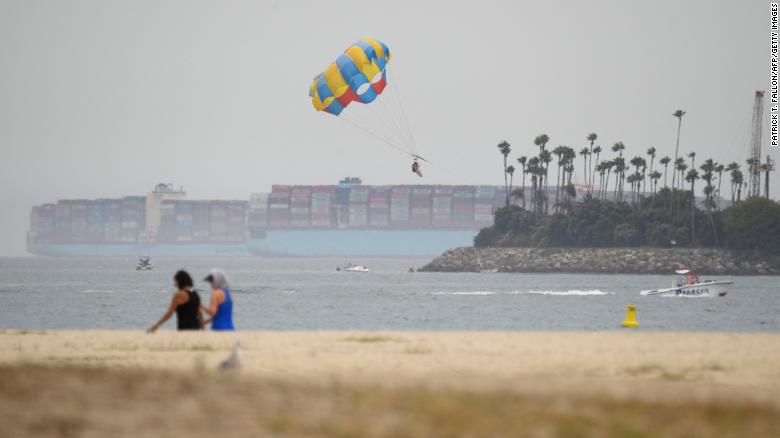 Container ships sit in the Pacific Ocean outside the Port of Long Beach, California on August 11, 2021.The backlog at ports will have a ripple effect on jammed warehouses and stretched road and rail capacity. Logistics networks have been running at maximum capacity for months, thanks to stimulus-fueled demand led by US consumers and a pickup in manufacturing. Truck driver shortages in the United States and United Kingdom have only exacerbated supply disruptions.US imports in March and May exceeded levels seen in October 2020, typically the peak of the shipping season, said Eric Oak, supply chain research analyst at S&P Global Panjiva.”This means that logistics facilities have been running flat out for most of the summer,” he added.It’s not just ports that are under pressure. Air terminals are receiving increasingly large amounts of freight as companies turn to alternative methods to transport their goods. At some of the larger US airports such as Chicago, there are delays of up to two weeks to claim cargo, according to Biesterfeld.Efforts to contain Covid-19 outbreaks have recently disrupted traffic at Shanghai Pudong and Nanjing airports in China.

“Name almost anything and it seems like there’s a shortage of it somewhere,” Biesterfeld added. “Retailers are struggling to replenish inventory as fast as they’re selling, let alone prepare for holiday demand.”Supply chains were discussed on nearly two thirds of some 7,000 company earnings calls globally in July, up from 59% in the same month last year, according to an analysis by S&P Global Panjiva.Consumer goods producers are taking drastic steps to meet demand — such as changing where products are made and moving them by plane instead of boat — but companies such as shoemaker Steve Madden (SHOO) say they’re already missing out on sales because they simply don’t have enough goods.The company has moved half the production of its women’s range to Mexico and Brazil from China in an attempt to shorten delivery times.

“In terms of the supply chain … we could talk about this all day. There are challenges throughout the globe,” CEO Edward Rosenfeld said on an earnings call last month. “There is port congestion, both in the US and China. There are Covid outbreaks at factories. There are challenges getting containers. We could go on and on.”It’s one of several major apparel brands hit by factory shutdowns in Vietnam over the past month. Data from S&P Global Panjiva shows that nearly 40% of the volume of goods imported into the United States by sea over the 12 months to July came from the Southeast Asian country.Adidas CEO Kasper Rorsted said the sportswear company will be unable to fully meet the “strong demand” for its products in the second half of the year due to the shutdowns, despite switching production to other regions.Supply chain difficulties have been “leading [to] significant delays and additional logistics costs, particularly as we have been making more use of airfreight,” he said on a recent earnings call.Andrew Rees, the CEO of Crocs, said that transit times from Asia to most of the company’s leading markets are approximately double what they were historically. “That’s been the case for some time, and we’re expecting [to] live with that,” he told investors last month.

To ensure product availability during the holiday season, Hasbro, which makes Monopoly and My Little Pony, said it is increasing the number of ocean carriers it works with, utilizing more ports to expedite deliveries and sourcing more products earlier from multiple countries.For consumers, the supply chain crunch is likely to mean higher prices. Hasbro, for example, is increasing prices to offset rising freight and commodities costs. The company is projecting that its ocean freight expenses will be on average 4 four times higher this year than last, according to chief financial officer Deborah Thomas.

Shoppers should also brace for longer than normal delivery times and may need to have several different gift ideas up their sleeves.”As we’ve been forecasting for months, shoppers are going to see some bare shelves at the holidays,” said Biesterfeld. “And if you buy most of your presents online, get it done early. Delivery time may be four to six weeks.”