In Greek mythology, the Chimera was a fearsome, fire-breathing monster with a lion’s head, a goat’s body, and a dragon’s tail. She terrorized the Lycians until felled by Pegasus, the winged horse. The Chimeric beast lives on in people’s imaginations, her name becoming synonymous with grotesque monsters combining bodily parts from different beings. It also lives on in science.

A chimera refers to a single organism with cells from different individuals, meaning two sets of DNA. This is not necessarily an abnormal state. For example, people undergoing bone marrow transplants will carry the DNA of the donor. Mothers are known to absorb cells of their in utero children.

“The findings on cellular communication hold promise for early human development, disease progression and aging, as well as organ transplantation and for testing therapeutics.”  Salk Institute

The chimeric manifestation that excites most horror is animal-human concoctions ostensibly created for research. One particularly troubling experiment was reported recently in Cell. This one involved inserting human 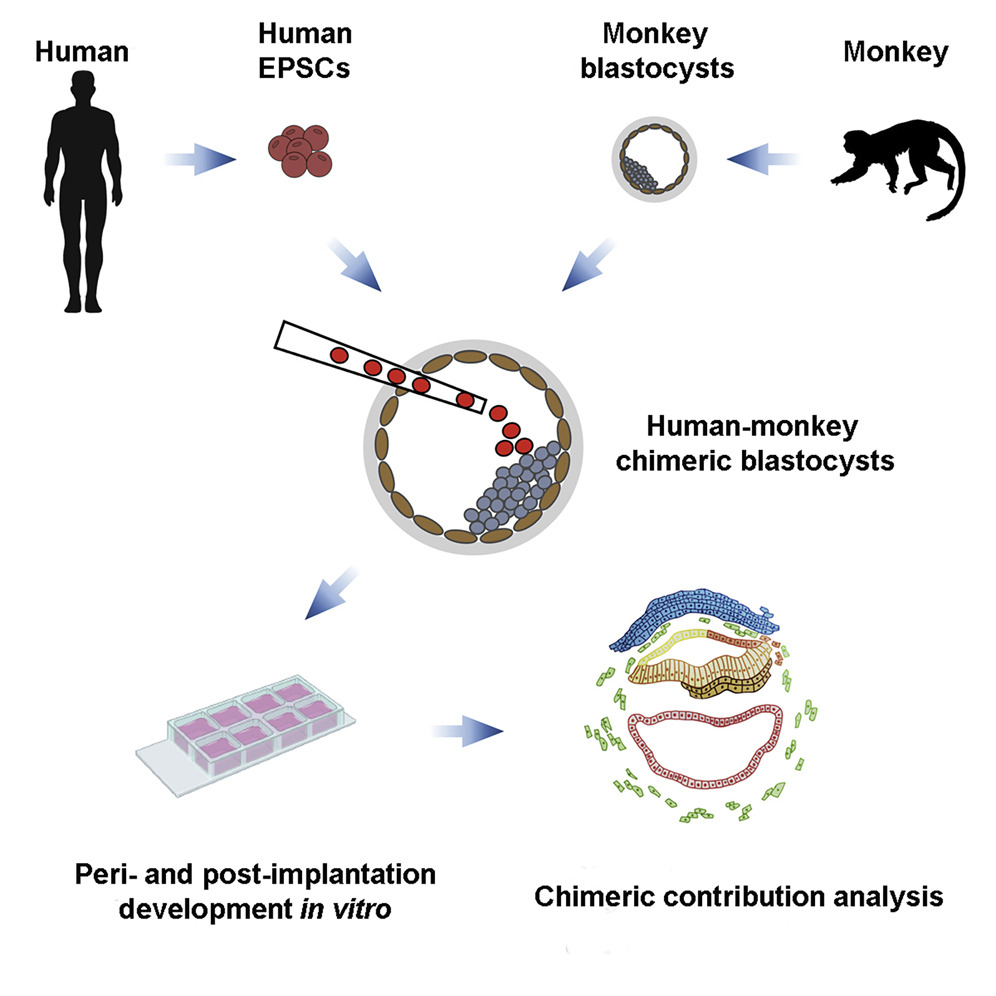 stem cells into 132 macaque embryos. Macaques are cute little monkeys – one of the more human-like animals. Each embryo was examined for up to 19 days before they were terminated or died naturally. [1]

No clear hypothesis or research objectives were articulated other than creating successful monkey-human organisms. The researchers defended the study, claiming “it would help researchers gain a clearer understanding of molecular pathways, allowing for them to continue to improve the integration of human cells into more suitable hosts…”

“The findings on cellular communication hold promise for early human development, disease progression and aging, as well as organ transplantation and for testing therapeutics.’” Salk Institute

According to the CDC, macaques can be dangerous, with the majority of macaques infected with the Herpes B virus. In fact, so dangerous are these animals that they are barred from import – except for experimental use.

“…the consequences of symptomatic infection may be severe. Viral infection rapidly progresses to central loci in the spinal cord and, eventually, the brain. Of 24 known symptomatic patients whose cases were reviewed in 1992, 19 (79%) died.” CDC

Practically, even if the macaque-human model worked, it would not be a viable basis to provide organs for human transplant, another putative goal of this research. So, one might ask, what were the researchers doing?

Other scientists disagree with using the chimeric process altogether, noting these goals could be accomplished via less dangerous models. This includes using human embryonic stem cells, which would be more ethical, suggesting these methods should be used to further research in the future.

Perhaps anticipating these concerns, the researchers of the monkey-chimera experiment took pains to enunciate the ethical dangers of their research, detailing the protective steps taken to assure ethical compliance. Although they tell us that they sought (unidentified) outside counsel and expertise and thanked Stanford University Research Ethics Program for helpful discussions and feedback during the protocol review process, the precise steps undertaken remain obscure.

The responses from ethicists have been both muted and mixed. A report released last week by the National Academies of Sciences, Engineering, and Medicine specifically addressed concerns of human-monkey chimeras noting that, “human nerve cells might enter animals’ brains and alter their mental capabilities” and if so, “ there will be no logical point at which the research should be stopped, or it may not be possible later to institute policies to block research that could result in nonhuman animals with unacceptable human capabilities.” Not surprisingly, perhaps, federally funding of such research in America is prohibited, barred under the Dickey-Wicker Amendment [2].

But bioethicist Karen Maschke of the Hastings Center in New York says she is satisfied that the work, which passed layers of  institutional review and “drew on advice from two [unnamed] independent bioethicists, was performed responsibly.”

All bioethics are local:

Perhaps not surprisingly, at least some of the ethical input for this research came from the Institute of Primate Translational Medicine and Kunming University of Science and Technology (IPTM, KUST), as the work was purportedly performed in China. Even though the research was reported and publicized by the Salk Institute, touting the efforts of the affiliated principal researcher, apparently it was funded almost entirely by five Chinese sources, including the Chinese government and one[almost defunct private] U.S. foundation.

Is there more to the story?

Actually, this wasn’t the researcher’s first chimeric attempt. In 2017, they experimented with inserting human pluripotent stem cells into pig embryos – 1,400 of them. That experiment, however ethically fraught, did have a definite purpose. Porcine organs, being of similar size, shape, and biology to human organs, are amenable to human transplants. This was to be “a step toward growing animals with organs that are suitable for transplantation into humans.” (Nature)

Sadly, that experiment flopped, dashing the hopes of the Salk researchers to engineer bespoke organs tailored to individual genetic human specifications. And so, apparently looking for a more successful or respectable outcome (and probably funding), the researchers went off in search of a more evolutionarily compatible, if less practically useful, animal model – the macaque. Seemingly, they were happily funded by the Chinese, who are quite interested in genetic engineering research. And as they anticipated, the experimental results in the macaque-human model were somewhat better- if practically useless and potentially dangerous.

And what if the hybrid embryos grew into hybrid human monkeys?

Surely, all science, even the most abhorrent, may yield useful knowledge. The question we must pose – and re-pose- is at what point do the dangers outweigh the benefits? Indeed, in this experiment, are there even benefits?

According to one expert, public bioethics in America often faces the “powerful temptation to use and exploit the vulnerable in biomedical research to gain prestige, professional advancement, the promise of funding, as well as the noble pursuit of knowledge.” [3]  Sadly, it seems we are seeing the fulfillment of this admonition right before our eyes. And some ethicists now question how much DNA is required before the chimeric entity is declared human, or by what other rubric should this determination be made? [4] The upshot being that below some arbitrarily declared quantum of human “stuff,” research that would otherwise be prohibited in humans could continue.

In the days of COVID-19, trust in the medical and scientific community is especially crucial; a lack of trust in the scientific community is catastrophic. Scientists, scholars, and relevant authorities collectively wring their hands, trying to persuade the public to trust biomedical experts.  But reading this article in Cell, all I could think of is Robin Cook’s Pandemic.- This episode should be the stuff of science-fiction. That it has crept into science-mainstream, proudly reported by so noble an institution as the Salk Institute, raises too many questions that should have us all worried.

[1] These monkey-human chimeras were allowed to live for 19 days, a feature rejected or outlawed in most countries. “Many western countries have adopted the 14-day limit on embryo research where the embryo has to be destroyed by the fourteenth day. This rule was recommended in the U.K.’s 1984 Warnock Report in the early days of IVF. In Australia, for example, under the Prohibition of Human Cloning for Reproduction and the Regulation of Human Embryo Research Amendment Act 2006, it is illegal for scientists to allow the development of a human embryo outside the body of a woman for more than 14 days.”

[2] “None of the funds made available in this Act may be used for- research in which a human embryo or embryos are destroyed, discarded, or knowingly subjected to risk of injury or death greater than that allowed for research on fetuses in utero … (b) For purposes of this section, the term `human embryo or embryos’ includes any organism, not protected as a human subject … that is derived by fertilization, parthenogenesis, cloning, or any other means from one or more human gametes or human diploid cells.”

[3] O. Carter Snead, What it Means to be Human: The Case for the Body in Public Bioethics, Harvard University Press – Here is an audio discussion with the author from National Review