Move comes amid tensions between US, Israel, and Tehran, with Iran tied to missile strikes on US bases and an attack on an Israeli-owned ship in Gulf of Oman

Israeli F-15 fighter jets escorted two American B-52 bombers through Israeli airspace on Sunday in a new show of force by the United States against Iran — with an Israeli element — amid rising tensions in the region.

Recent weeks have seen multiple attacks on American military bases in Iraq by Iran-linked militias, including one last week that resulted in the death of an American contractor, as well an attack on an Israeli-owned ship in the Gulf of Oman that Israel has blamed on Tehran. Late last month, the US responded to the rocket attacks on its bases with an airstrike on an Iran-linked militia in Syria, killing at least one member.

Sunday’s flyby through the region by the B-52 heavy bombers was at least the seventh such maneuver in the past six months. It marked the first time that Israeli planes were photographed accompanying the US bomber, however.

Each B-52 was accompanied by four Israeli F-15 jets.

According to the US military, the patrol flight was meant to “deter aggression and reassure partners and allies of the US military’s commitment to security in the region.”Volume 90%

In addition to the Israeli F-15s, aircraft from Saudi Arabia and Qatar escorted the B-52 bombers as they flew through their respective airspaces.

“This flight is another testament to the strategic cooperation with American forces, which is a cornerstone in the preservation of the security of the airspace of the State of Israel and the Middle East,” the Israel Defense Forces said in a statement.

In recent months, Tehran has attempted to improve its bargaining position with the United States on the issue of its nuclear program by ratcheting up tensions in the region as the two countries attempt to negotiate a mutual return to the 2015 nuclear deal. 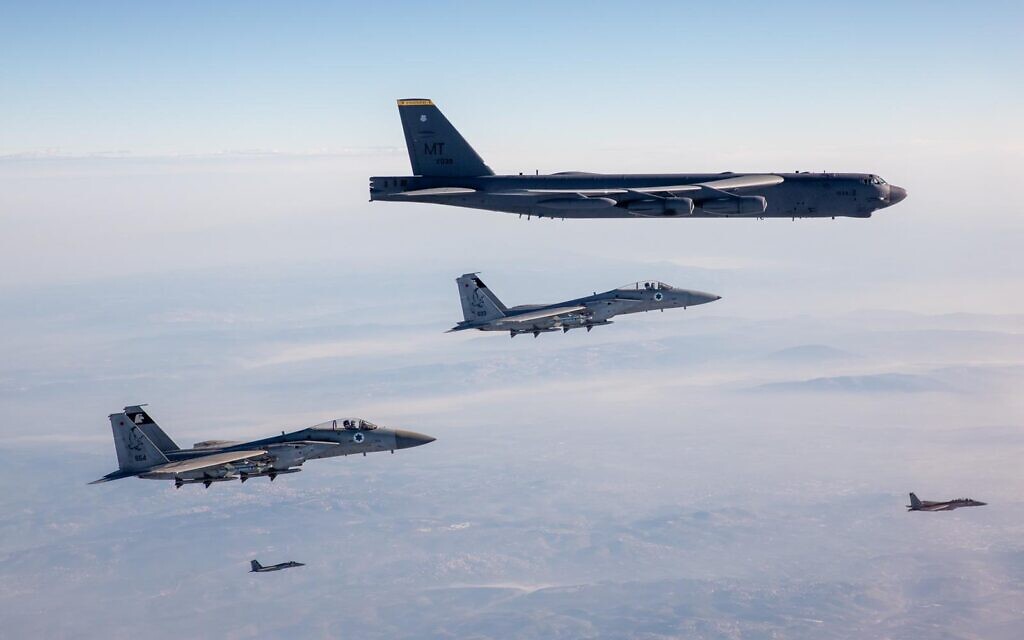 In addition, Iran has for months threatened retaliation against Israel over the killing of its chief military nuclear scientist, Mohsen Fakhrizadeh, in what was widely attributed to an Israeli Mossad operation. An attempted bombing near the Israeli embassy in India last month, as well as last week’s mine attack on an Israeli cargo ship in the Gulf of Oman, have both been attributed to Iran by Israel. (Click to Source)