The Joe Biden State Department might have a strange idea of “national security.”

In a world where the Islamic Republic of Iran is a known sponsor of terrorism and communist China poses new challenges almost daily, a deputy spokeswoman for the department tasked with dealing with foreign countries seems to think the real threat comes from within:

From American police officers, to be specific.

“The largest threat to U.S. national security are U.S. cops,” Porter wrote in the post, according to the Free Beacon. “Not ISIS, not Russian hackers, not any one or anything else. If y’all don’t wake up and rise up to this truth, the genocide against Blacks in America will continue until we are near extinct. That’s not the world I seek to live in or create for myself and those around me.” 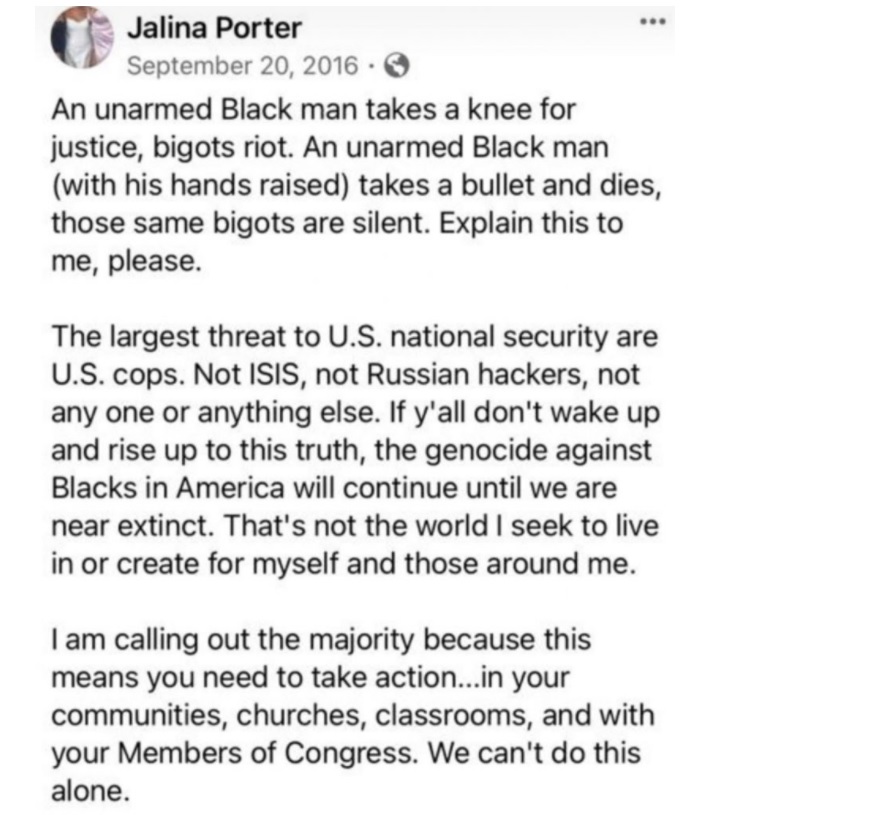 A screenshot of a Facebook post reportedly published in 2016 by Jalina Porter, now a deputy spokeswoman for the United States State Department.

The post was in apparent response to the September 2016 shooting of Terence Crutcher, an unarmed black man who was killed by a Tulsa, Oklahoma, police officer during a roadside encounter.

A Twitter post published late Monday by One America News Network’s Jack Posobiec shows what appears to be a 2016 tweet from Porter about the same incident, repeating the “national security” remark and calling police officers “the Blue Klux Klan.” Porter’s Twitter account, @glamonthehill is now locked.

Then-Tulsa Officer Betty Jo Shelby was charged with manslaughter in the shooting but acquitted in 2017 by a jury that found the shooting “tragic” but “justifiable,” according to NBC News.  She resigned from the police department in August 2017.

There will likely always be questions about the 2016 shooting. Crutcher was found to have been under the influence of two hallucinogenics — PCP and a similar drug, Tenocyclidine. The jury that acquitted Crutcher questioned why she used a gun instead of a Taser.

But the details about an unfortunate death in Oklahoma are not really the issue.

What is noteworthy here is that a woman who is now a mouthpiece for the United States State Department seems to be under the impression that the real national security threats are not from the major international rivals of her country with documented histories of barbarism.

Instead, she seems to think that American police officers — many of whom are veterans of their country’s armed forces — are the real threat to the country she’s supposed to be serving.

That kind of leftist rabble-rousing might play well for a Black Lives Matter mob whipped up by street agitators, or antifa militants attacking yet another courthouse in their violent disdain for the greatest country the world has ever known.

Heck, it might be a real showstopper at a Democratic National Convention, which is not exactly police-friendly territory these days.

But Democrats and the Biden administration are on the world stage now, where disputes about domestic imperfections pale in comparison to the actual existential threats represented by the country’s enemies — now and in the future.

If the Joe Biden State Department considers American police officers the biggest threat to national security, it’s likely to take a gentle hand with real dangers like the murderous mullahs of Tehran, or the aggressive communist regime in Beijing that loosed the coronavirus on the world.

It’s just possible, of course, that Porter’s words were not thought out, fired off in a moment of outrage on Facebook and Twitter and don’t represent her feelings now. (The Western Journal has contacted the State Department for comment.)

But it’s also entirely possible that men and women who really believe this nonsense are populating the State Department now, coddled and promoted by the liberals of the Biden administration at the risk of endangering the country as a whole.

If that’s Joe Biden’s idea of “national security,” the American people — and American police officers in particular — deserve much better. (Click to Source)