It will bring the freezing temperatures to at least 85 percent of America. More than 235 million Americans are expected to shiver through the unusually icy weather.

In the Midwest, temperatures will plunge as low as -25 degrees Fahrenheit (-31 degrees Celsius).

The news comes as comes as millions of residents in the Northeast finally begin digging out of Winter Storm Elena, which brought record breaking snowfall to the region earlier this week. 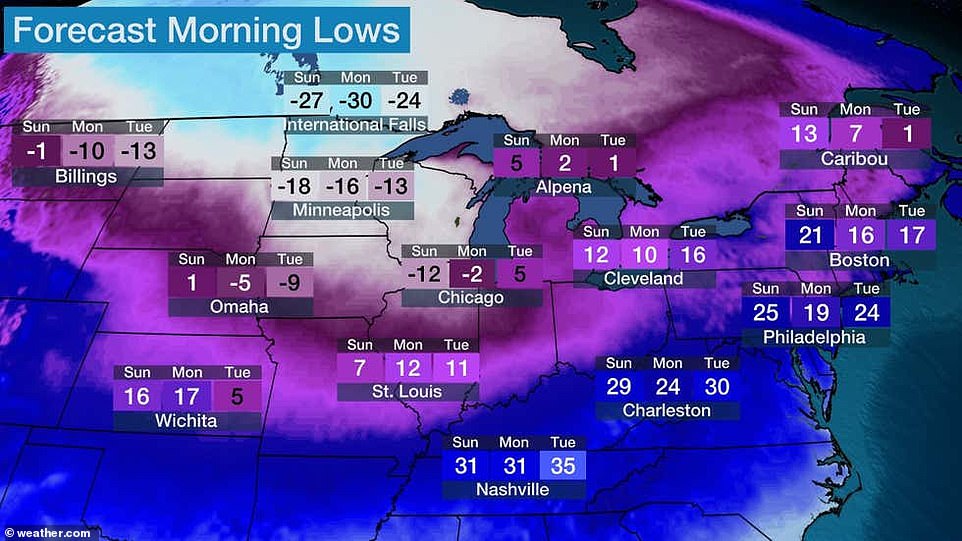 This map shows forecast lows headed into next week when the polar vortex is expected to blow down into the US. Below freezing temperatures will be felt in Nashville and Charleston

The polar vortex will bring the coldest temperatures of the year to the Midwest, with  below freezing temperatures forecast in many areas 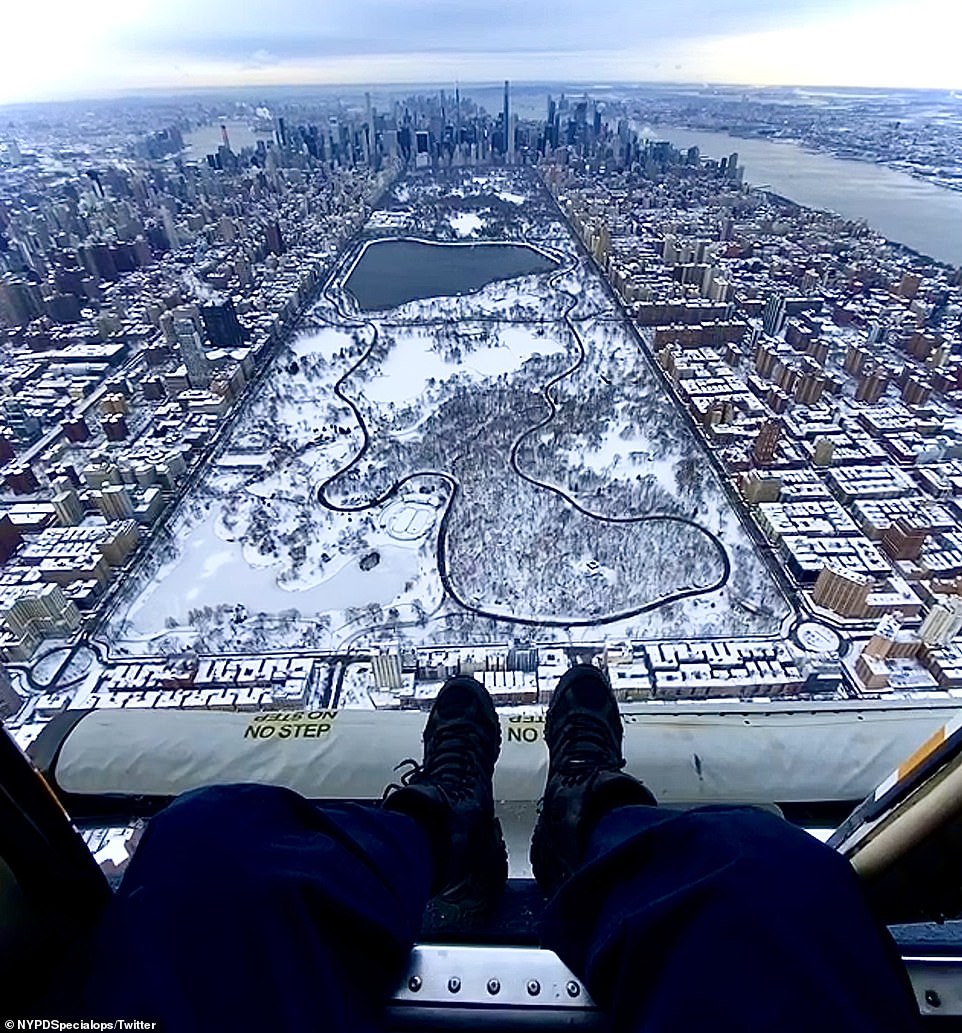 After Winter Storm Olena dumped snow across the Northeast this week, all 50 states are set to experience below freezing temperatures next Monday due to a polar vortex  blowing south from the Arctic. New York City is pictured from the air on Wednesday

The National Weather Service reports the number broke a 122-year-old record for most snow in a New Jersey community from a single storm.

Residents were finally able to leave their homes on Tuesday, but faced a significant clean-up effort.

Two Mt. Arlington locals were seen wading through waist-deep snow trying to shovel out their driveway.

The Weather Channel reports that, as of Wednesday morning, the storm is tracking east of Nova Scotia, but has significantly weakened.

On Wednesday, New York City saw its first day of clear skies since the weekend.

Orlena dumped more than 17 inches of snow on the Big Apple, forcing the temporary closure of schools, businesses and COVID-19 vaccination centers.

The city attempted to reboot on Wednesday, but it was not without problems.

Several restaurants in Manhattan’s Chinatown has their outdoor dining set-ups ruined by the blizzard, with photos of the area showing tents brought down and tables and chairs buried beneath snow.

However, Orlena’s aftermath did little to keep hardened New Yorkers off the streets.

One resident was pictured tucking in to a taco amid piles of plowed snow during the lunch hour on Wednesday. 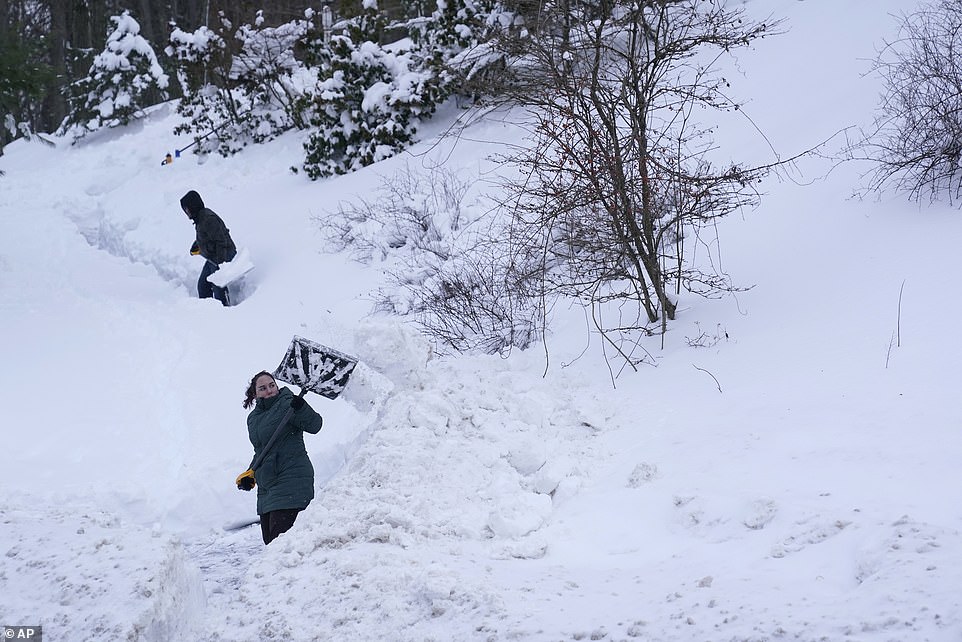 NEW JERSEY: Russell Michelle Hoyer are pictured Wednesday trying to find their driveway under the snow in Mt. Arlington, where a whopping 35.5 inches of snow has fallen since Sunday 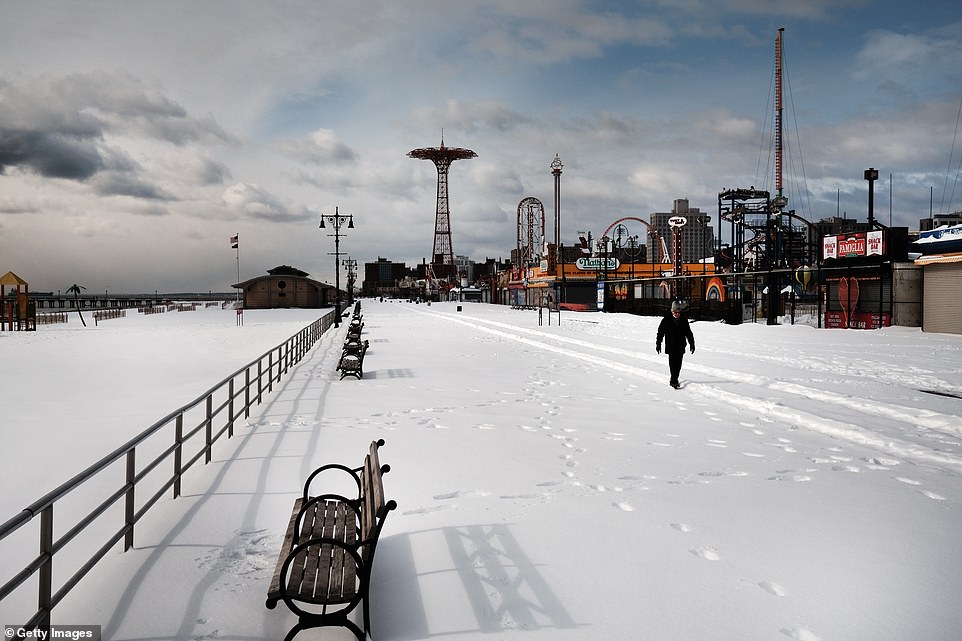 NEW YORK: A resident of Coney Island is seen walking along the famous snow-covered boardwalk on Wednesday after the storm finally moved through. Snow can be seen covering the sand of the iconic beach 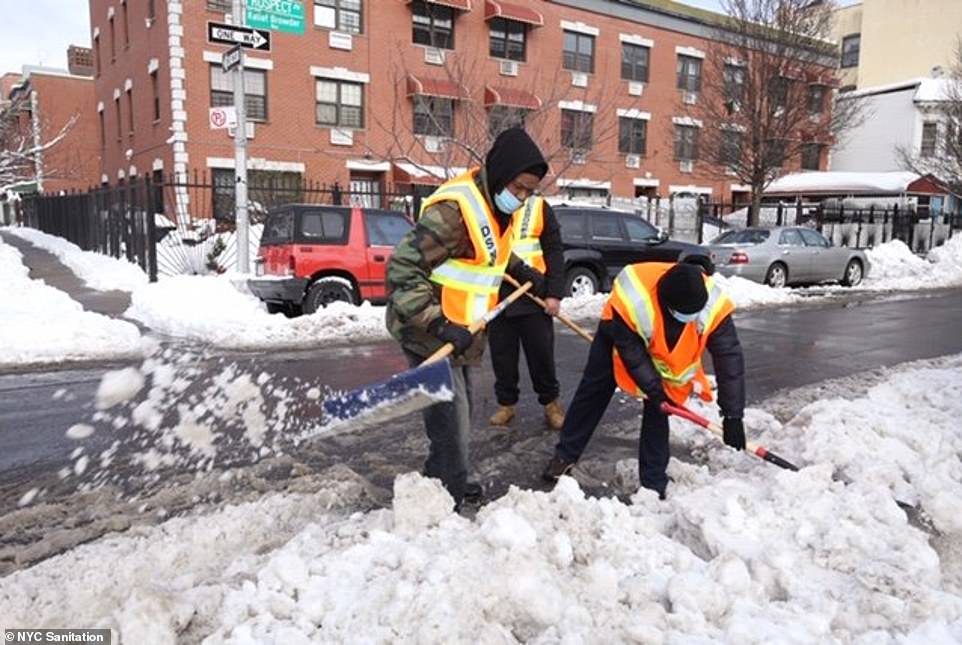 NEW YORK: On Wednesday, New York City saw its first day of clear skies since the weekend, and members of the city’s Sanitation Department got to work shoveling out streets 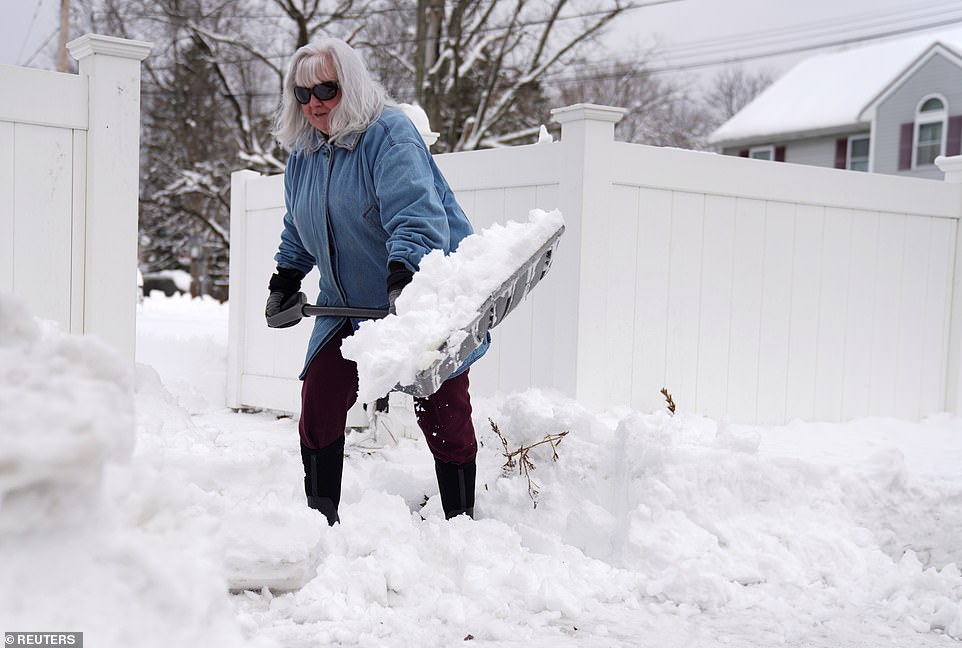 MASSACHUSETTS: A resident of Wilmington is pictured clearing out his street on Wednesday after the storm moved through 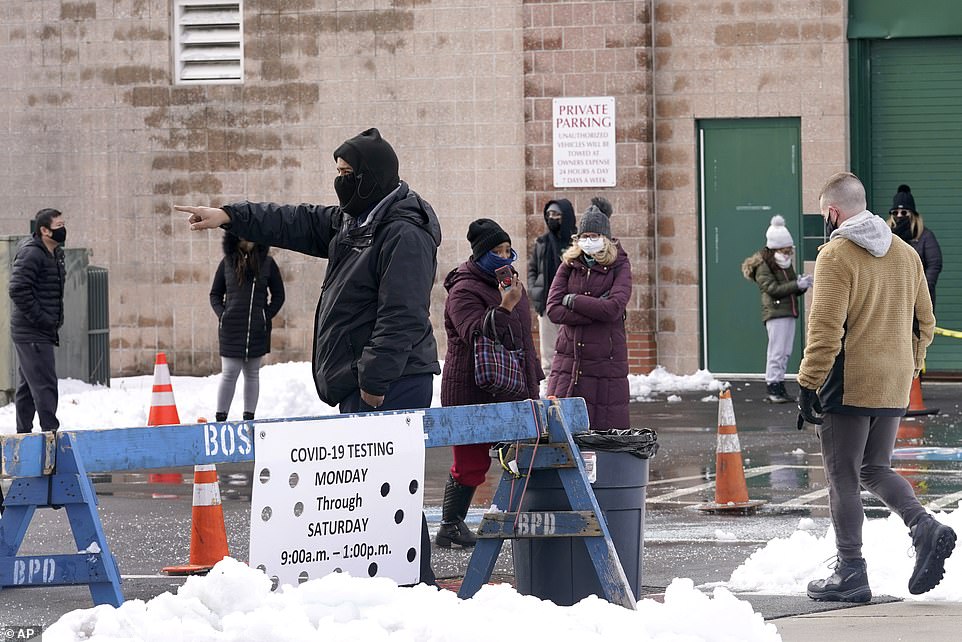 MASSACHUSETTS: The storm forced the closure of some COVID-19 vaccination centers earlier in the week. On Wednesday, residents in Boston were pictured back at a re-opened site to receive their shots 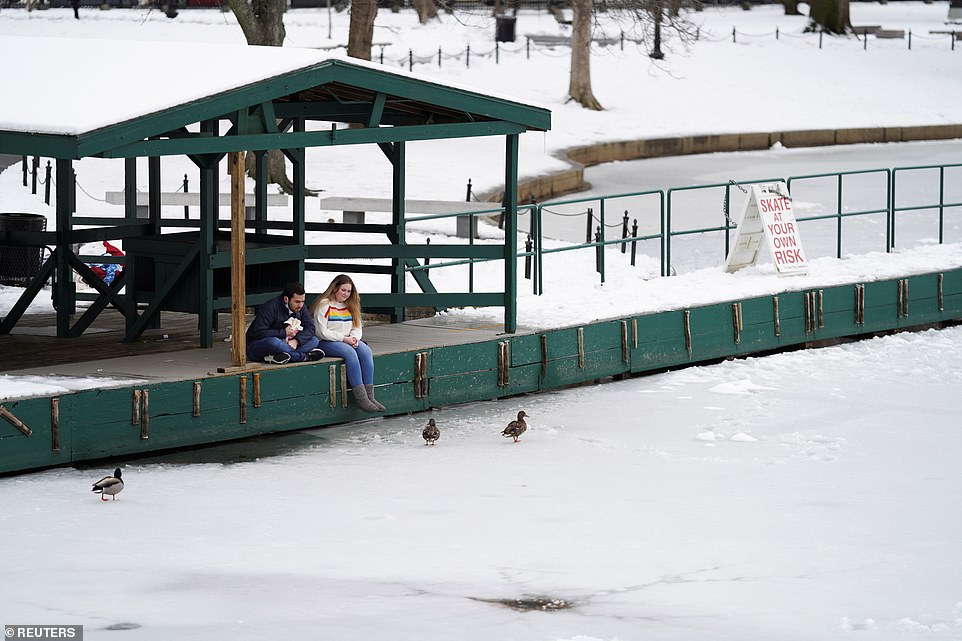 MASSACHUSETTS: People sit near the ice at the Boston Common Park after Winter Storm Orlena 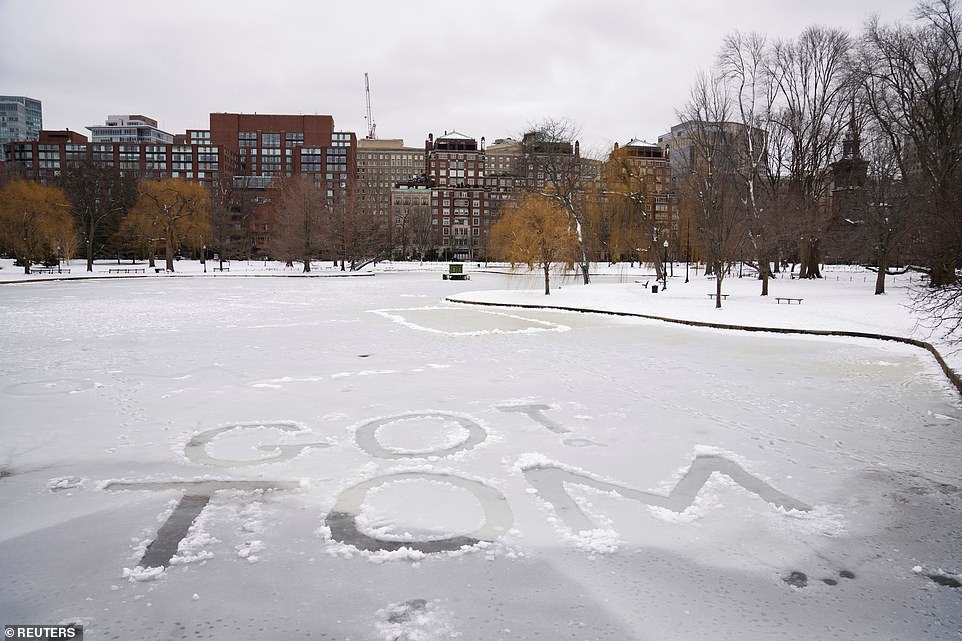 MASSACHUSETTS: On Wednesday, one plucky local wrote words in the ice of Boston Common to s show support for Tom Brady in the Super Bowl this coming Sunday. While he no longer plays for the Patriots, it seems Brady still has support of people in the city

Indoor dining in New York City is not scheduled to reopen until February 14 amid the COVID-19 pandemic.

Meanwhile, the New York Sanitation Department had their work cut out for them, continuing to plow snow from the roads as drivers got back into their vehicles.

Olena had significantly weakened by Wednesday as it moved up to Canada. 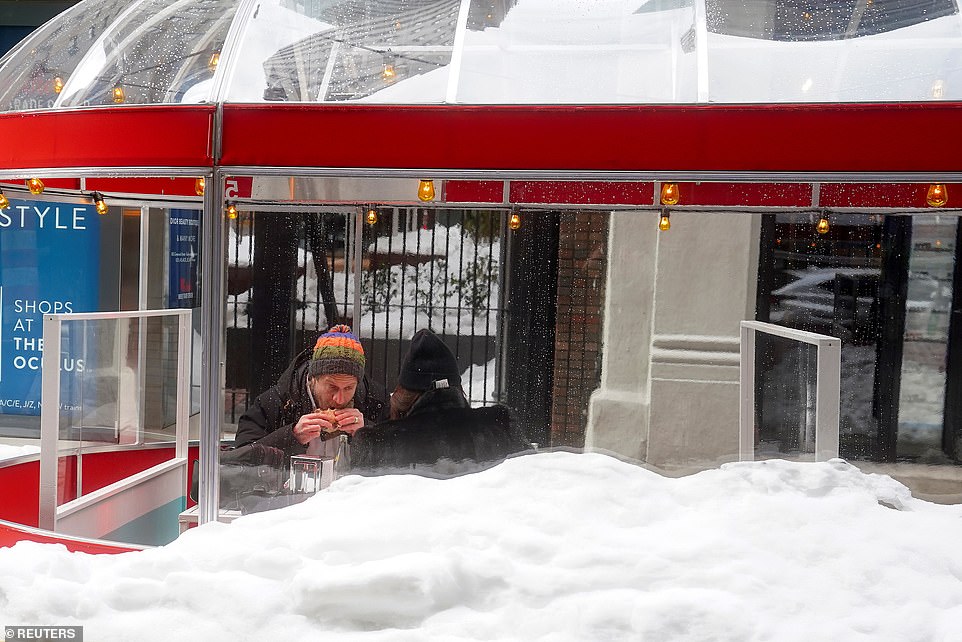 NEW YORK:  One local was pictured tucking in to a taco amid piles of plowed snow during the lunch hour on Wednesday 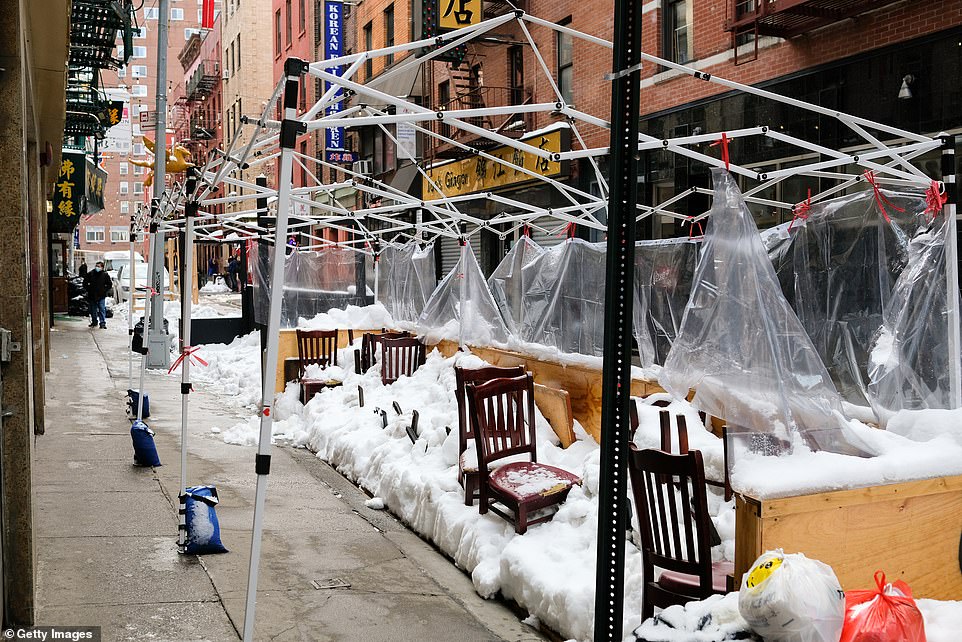 NEW YORK:  Several restaurants in Manhattan’s Chinatown has their outdoor dining set-ups ruined by the blizzard, with photos of the area showing tents brought down and tables and chairs buried beneath snow 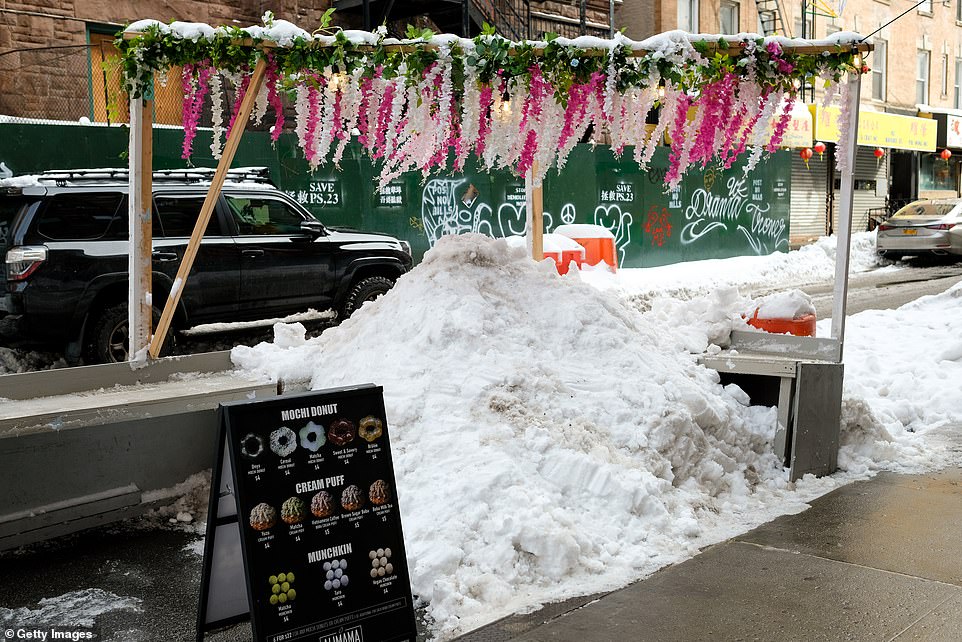 NEW YORK: Piles of snow were seen on the sidewalk in Chinatown, where re-opened restaurants were only able to offer outdoor dining options due to the COVID-19 restrictions 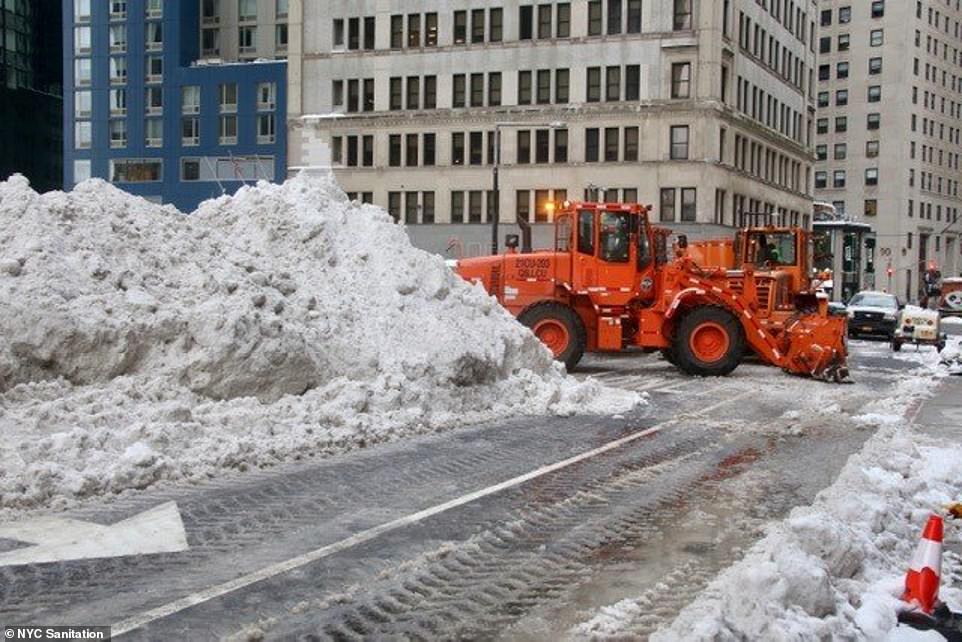 NEW YORK: The New York Sanitation Department had their work cut out for them, continuing to plow snow from the roads as drivers got back into their vehicles 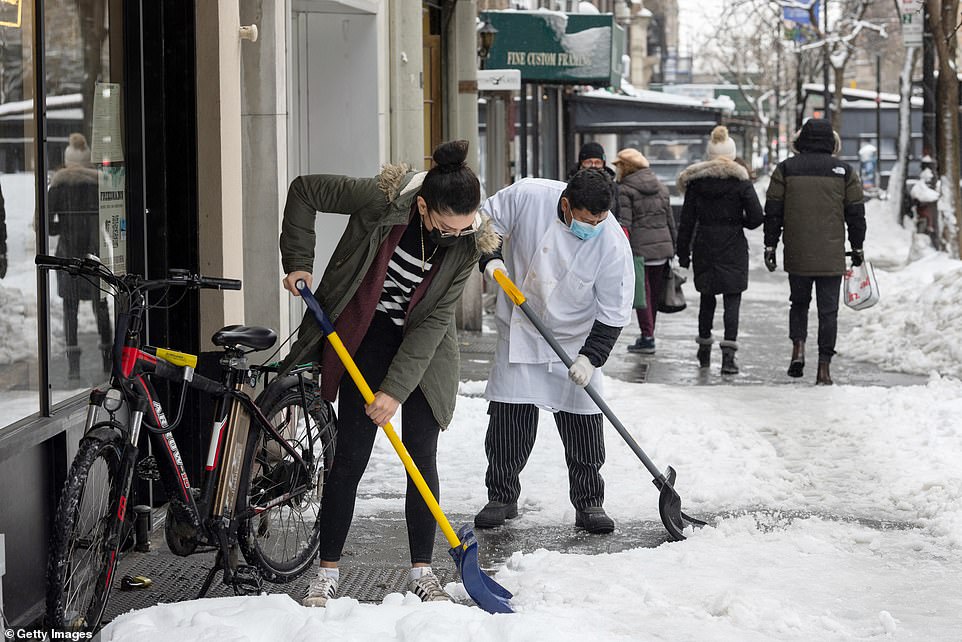 NEW YORK: Restaurant workers in Manhattan’s Upper West Side were seen clearing snow from the sidewalk 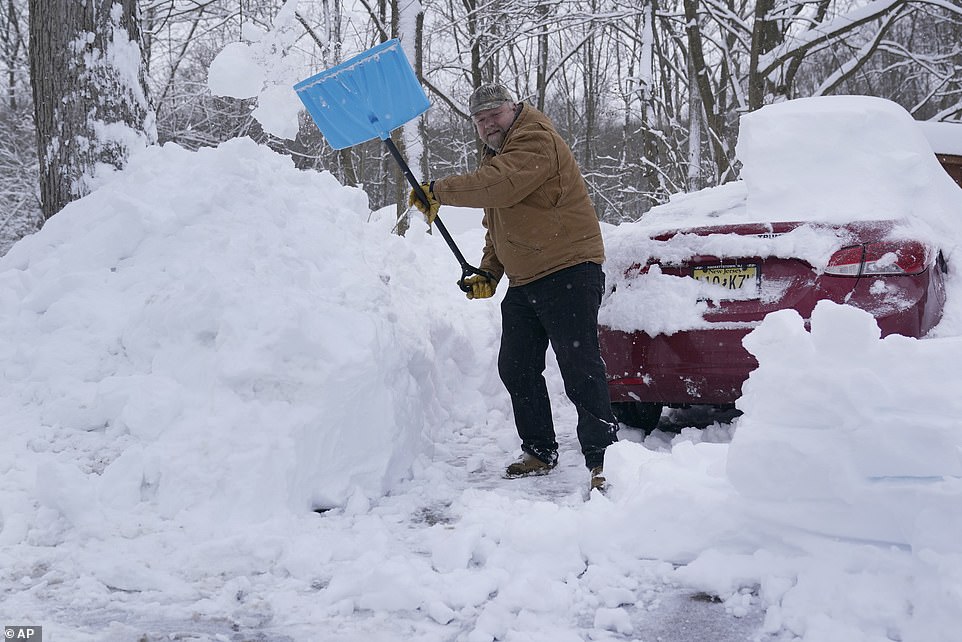 NEW JERSEY: Bob McDonald shovels out his driveway and car in Mt. Arlington on Wednesday, after the town was doused with 35 inches of snow in the past three days 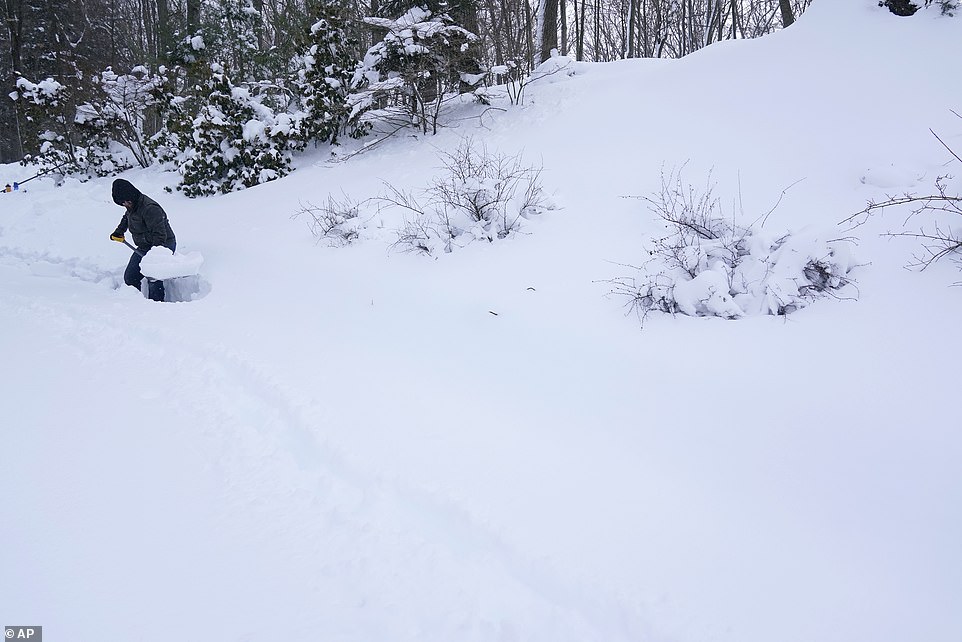 NEW JERSEY: Russell Hoyer tries to find his driveway under the snow in Mt. Arlington on Wednesday 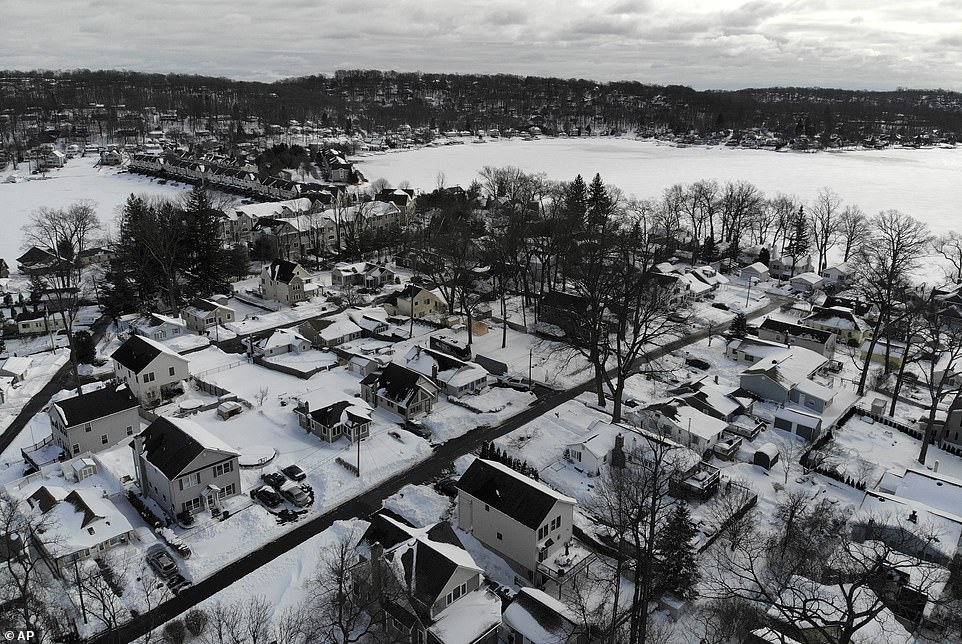 NEW JERSEY: Houses along the shore of a snowed-over Lake Hopatcong are seen in Mt. Arlington (Click to Source)