New Delhi (CNN)India on Monday accused Chinese troops of taking “provocative” actions near a disputed border high in the Himalayas, violating previous deals between the two nuclear-armed rivals intended to ease tensions in the region.

The Indian allegations come two-and-a-half months after a bloody clash along the border left at least 20 Indian soldiers dead. China has never acknowledged any casualties from the hand-to-hand combat on June 15 in the Galwan Valley, north of where India says the latest tensions flared overnight Saturday into Sunday.
High-level meetings between Chinese and Indian military commanders since the Galwan Valley clash, in Eastern Ladakh, had helped to calm the situation along the de-facto border, known as the Line of Actual Control (LAC).
A statement by India’s Defense Ministry said China’s Peoples Liberation Army “carried out provocative military movements to change the status quo” and “violated the previous consensus arrived at during military and diplomatic engagements during the ongoing standoff in Eastern Ladakh.”
The statement said that Indian troops preempted Chinese military activity on the southern bank of Pangong Tso Lake and undertook measures to strengthen their positions and “thwart Chinese intentions to unilaterally change facts on the ground.”
China’s Foreign Ministry on Monday denied any incursion into Indian territory. “The Chinese border troops have always strictly abided by the Line of Actual Control and have never crossed the line. The border troops of the two countries have maintained communications on the Line of Control,” spokesperson Zhao Lijian said. 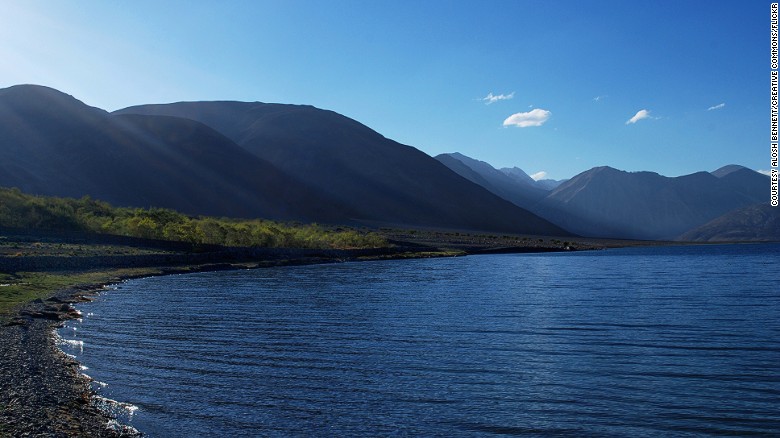 Pangong Tso Lake in the Himalayan Mountains.
Pangong Tso Lake is a long, thin body of water situated about 200 kilometers (125 miles) south of the Galwan Valley at a height of 4,350 meters (14,270 feet) in the Himalayas. Most of the lake lies in the Chinese region of Tibet, with the Line of Actual Control passing through it.
Saturday’s alleged incident is the latest in a long-running series of territorial flare-ups between the two sides in the Himalayas. In 1962, India and China engaged in a border war that left thousands dead. In the wake of the conflict, the two sides established the 2,100 mile-long (3,379 kilometer) Line of Actual Control, though neither side agrees on its precise location and both regularly accuse the other of overstepping it, or seeking to expand their territory.
Skirmishes are not uncommon along the remote, mostly mountainous border. However, the June 15 incident was the deadliest in decades and led to a plunge in relations between Beijing and New Delhi.
Though tensions have eased in the months since, both sides maintain a large troop presence in the border region, raising the risk of potential miscalculation in the event of sudden and unexpected clashes.
China maintains that India was entirely to blame for the large-scale brawl that broke out on June 15 after Indian troops crossed the LAC in violation of an earlier agreement.
“It was shocking that Indian troops publicly violated the agreement, broke their own promise and crossed the LAC to provoke the Chinese side on June 15,” Wu Qian, a spokesman for China’s Defense Ministry, said in late June. “When Chinese military troops arrived to negotiate, they were suddenly attacked by Indian troops, and that led to a physical fight between the two sides and caused casualties.”
In response, India’s Ministry of External Affairs said that China instigated the deadly clash.
“It has been the Chinese actions thus far which have led to increase in tension in the region and also to the violent face-off of 15th June with casualties,” it said in a statement in June. (Click to Source)