An F/A-18E Super Hornet takes off from the flight deck of a US navy aircraft carrier in the South China Sea. Photo: EPA
Manila will invoke its defence agreement with the United States if China attacks its naval vessels in the South China Sea, Philippine Foreign Secretary Teodoro Locsin Jnr said on Wednesday.
His comments mark the first time the Rodrigo Duterte administration has openly declared it would turn to Washington for help, amid ongoing flare-ups between Manila and Beijing in the disputed waters. Locsin, who appeared on the ANC news channel’s morning talk show, said Manila would continue air patrols over the South China Sea despite Beijing’s calls to halt what it described as “illegal provocations”.
“They can call it illegal provocations, you can’t change their minds. They already lost the arbitral award,” he said, referring to the 2016 decision by an international tribunal
that ruled against most of Beijing’s expansive claims to the South China Sea.

“[But if] something happens that is beyond incursion but is in fact an attack on say a Filipino naval vessel … [that] means then I call up Washington DC,” he added.

‘China has the arms, we do not’, Duterte rules out confronting Beijing in the South China Sea. Pressed by presenter Karen Davila on the circumstances that would make Manila make the call to the US, he refused to go into specifics, saying “I will not discuss that because the essence of deterrence theory is uncertainty.”

Locsin had earlier this month spoken to US Secretary of State Mike Pompeo, after Washington rejected China’s claims to the resource-rich disputed waterway through which US$3 trillion of trade passes and said the US would support countries who believed Beijing had violated their own claims.
Beijing has often relied on its nine-dash line map to claim historic rights over the sea, which has been challenged by the Philippines, Malaysia, Vietnam, Taiwan and Brunei.

Whether we like it or not a military confrontation between the US and China will involve us, and the Philippines will have no choice but to find itself siding with the USLauro Baja

Pompeo had spoken to a host of foreign ministers from the 10-member Association of Southeast Asian Nations (Asean) bloc including Locsin, with a State Department note on the call saying both men “discussed the recent change in US policy on maritime claims in the South China Sea, US support for Southeast Asian coastal states … and opportunities for further US-Philippine maritime cooperation.”

In the ANC interview, Locsin did not want to elaborate on the discussion but said: “I was talking to the secretary of state and these are things that are not yet ripe for revelation.” 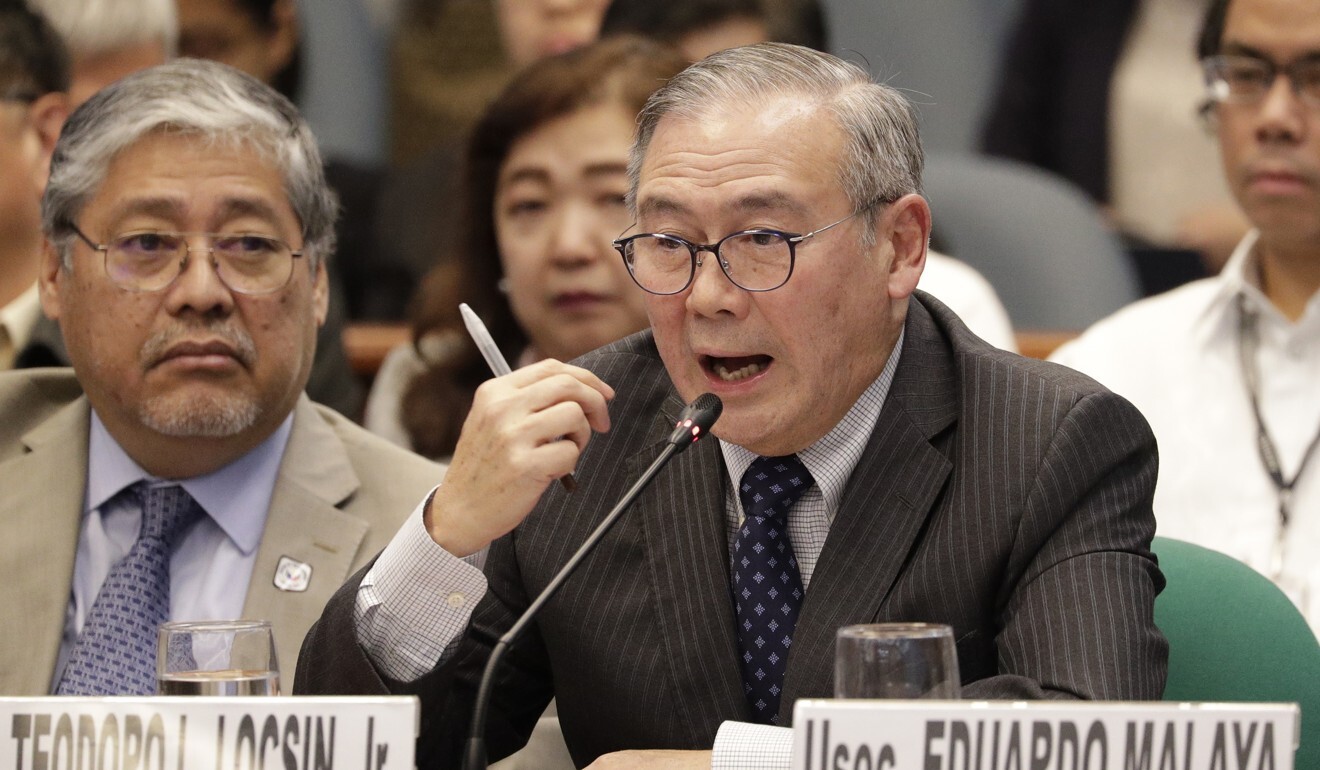 Asked to comment on Locsin’s remarks, Aaron Jed Rabena, a research fellow at the foreign policy think tank Asia Pacific Pathways to Progress, said Beijing “might perceive it as a sign of continuing strategic alignment between Manila and Washington”.

Rabena said that when Pompeo visited the Philippines in March 2019, Pompeo had said that “if China initiates an armed attack on any member of the Philippine armed force or public vessel or aircraft in the South China Sea, the Mutual Defence Treaty will be activated”.

The analyst said the Philippines was “just more assertive in safeguarding the country’s sovereign rights and interests because the government feels that it needs to respond to the actions of the Chinese side”.

Since 1951 the US and Philippines have had a Mutual Defence Treaty that commits them to supporting each other in the event either is attacked.

Under the previous US president, Barack Obama, the US backed away from a concrete commitment to apply the treaty to the Philippines’ maritime territorial disputes with China.

Locsin said “the Obama administration – Democratic administrations – tend to be appeasing” and it had “bowed down to China, which is why we lost the reefs”. He was referring to the Scarborough Shoal that China has occupied since 2012 after a stand-off with Manila. The shoal, 240km west of the Philippines’ Luzon and 650km from China’s Hainan province, is one of the region’s richest fishing grounds. 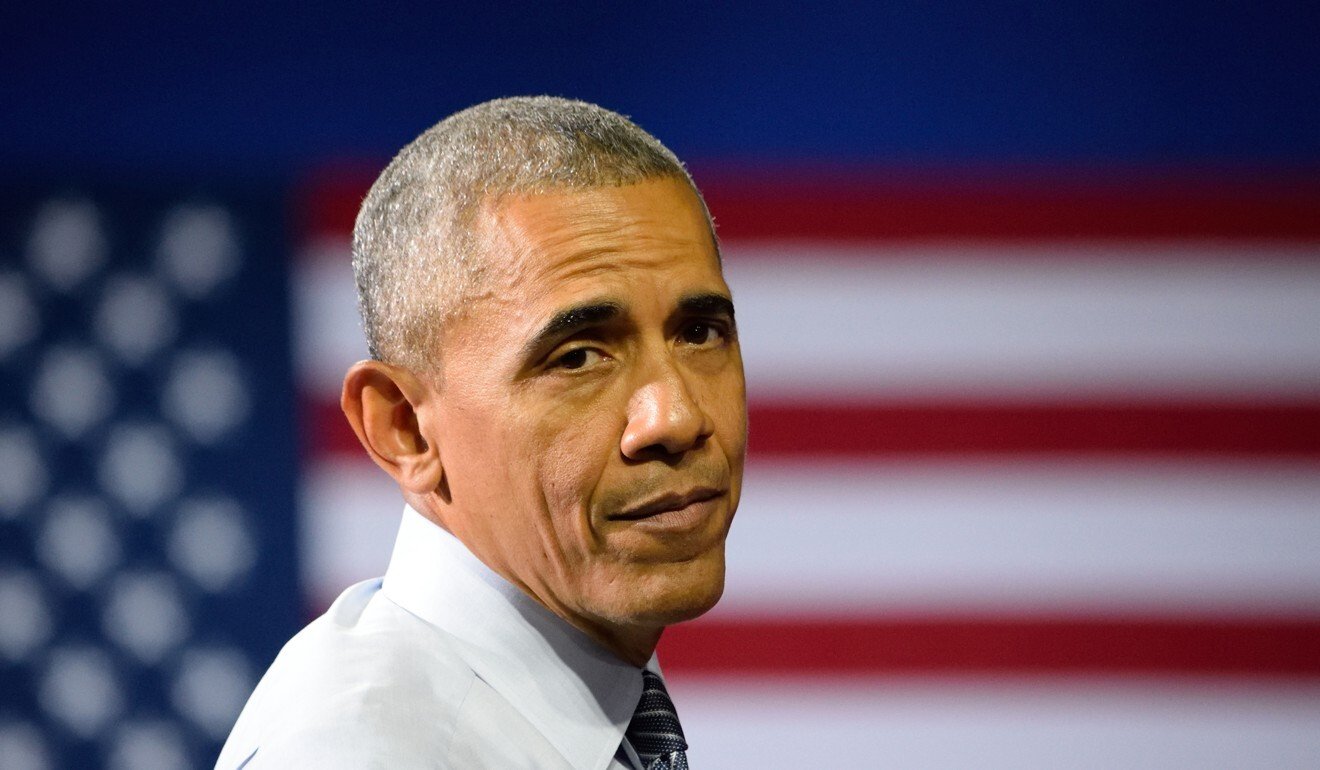 Locsin said the Obama administration had ‘bowed down to China’.

By contrast Locsin said, “the Republican administrations have always been very firm about American commitment to freedom and independence of nations”.

He said the Trump administration had “pivoted to Asia to assert fundamental things, freedom of navigation, independence and sovereignty of states, guarantees against aggression to preserve a country’s freedom”.

Over the past few months, Manila’s language – like Hanoi’s – in its territorial dispute with Beijing has become increasingly strident and assertive.

A senior government official, who asked not to be identified, said: “It’s part of a recalibration of foreign policy, to make it more independent and assertive of our national sovereignty and sovereign rights; the overall thrust is still the same, to maintain friendly and cooperative relations with China but at the same time to push back whenever there are incidents involving issues of Philippine sovereignty.”

The official said it was a case of sending a clear message and drawing a line in the waters: “The Mutual Defence Treaty can be invoked if a Philippine vessel is attacked or if … maritime features we control are occupied by force.” This, he added, included the Philippine landing craft deliberately grounded and garrisoned by a dozen men on the Second Thomas Shoal.

The latest row happened last week when the Philippine foreign ministry filed a diplomatic protest – its 57th – over what it said was China’s “illegal confiscation” of Filipino fishing equipment near Scarborough Shoal.

Reacting to Manila’s protest, Chinese foreign ministry spokesman Zhao Lijian last week said China’s patrols in the South China Sea were “beyond reproach” and air patrols by the Philippines infringed on its sovereignty. He defended activities by the Chinese coastguard and urged the Philippines to “immediately stop … illegal provocations”.

Asked by Davila if the Philippines would issue another note against China’s protestations, Locsin said he reserved judgment.

While Manila’s tone is a departure from that of previous years, it continues to engage in a balancing act to maintain good ties with China, which has promised the Covid-19 hit nation priority in a vaccine.
This month, Duterte ordered the Philippine navy not to join US-led military exercises in the South China Sea, with analysts describing it as a move to placate Beijing.

Duterte, who came to power in 2016, had fulsome praise for China at the start of his term and announced his intent of pivoting the Philippines away from the US, its traditional ally, towards a close embrace with Beijing.

Duterte said several times that he might set aside the Philippines’ arbitral win in The Hague in favour of closer economic ties with China. He also scaled back Philippine military exercises with the US, mentioned he might scrap the Mutual Defence Treaty altogether and announced this February that the Philippines would withdraw from a Visiting Forces Agreement with the US. The VFA is considered an important component of the mutual defence treaty.

But in June, Duterte said he was “suspending” the abrogation of the VFA. Locsin said this was because it benefited “Philippine interest that we have a US presence in the region”. He said that Duterte “appointed me knowing where I was coming from … I was very firm about protecting what was ours, I was very firm in never bending a knee to China”.

we face the grave risk of being caught in a possible crossfire – it’s difficult to predict how the situation will develop, but our strategic interests are to ensure our national survival and development”.

Locsin told Davila, “I can tell you, I don’t foreclose any means to protect sovereignty and freedom of my country. That includes the worst.”

Lauro Baja, who twice served as president of the United Nations Security Council, said that “whether we like it or not a military confrontation between the US and China will involve us, and the Philippines will have no choice but to find itself siding with the US.”

The senior official who asked not to be named said: “The Chinese may take exception to the necessity of US presence but at the same time they may take it in stride, after all, they are also aware of our [defence treaty] and long-standing friendly ties with the US. What matters to them is that the Philippines remains friendly to China and does not join the US in a confrontation with China.”

China is currently conducting six days of exercises in the South China Sea near the Paracel Islands, where Vietnam has competing claims, in the second set of drills in the area by Beijing in two months.

Vietnam on Wednesday called on China to cancel the drills, saying it violated Vietnam’s sovereignty and complicated ongoing negotiations for a South China Sea code of conduct between China and Asean. (Click to Source)

This article appeared in the South China Morning Post print edition as: Manila looks to U.S. if china strikes.

What’s stopping you from a successful Recovery?  CLICK HERE