Along with the invisible invader aka the coronavirus, several countries in South and Central Asia are also under a vicious attack by swarms of locusts.

The locusts first spread across East Africa in 2020 and hordes of them also made their way to Yemen, Oman, Saudi Arabia, the United Arab Emirates, Kuwait, and Iraq before heading eastward into Iran, Pakistan, Afghanistan, and India. And lately, locusts in the north have brought their voracious appetites to parts of Turkmenistan, Uzbekistan, Kazakhstan, and Tajikistan in what is being called the worst plague of the pests in two decades.

As they devour vegetation along their journey, crops in the regions that the locusts have infested are suffering immeasurably.

The damage done by the pests combined with reductions in food production and global trade due to the coronavirus pandemic have sparked concerns that there could be food shortages in some parts of the world this winter.

These are desert locusts, described by the UN’s Food and Agriculture Organization (FAO) as “one of the most voracious insects, which… can eat all type of vegetation that it comes across.“

Surprised that no one has blamed Tablighi Jamat for locust attack in India. May better sense prevail. Prayers for all! 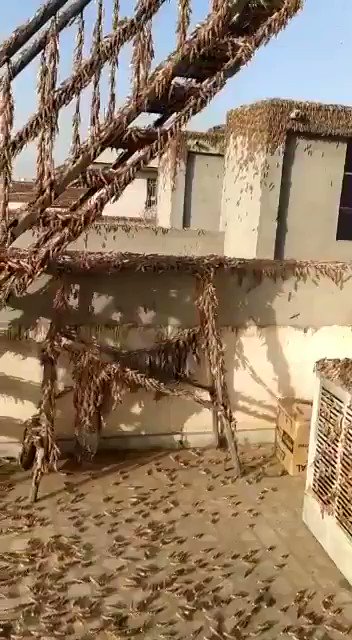 604 people are talking about this

Also according to FAO, a swarm covering 1 square kilometer of land can contain “about 40 million locusts, which eat the same amount of food in one day as about 35,000 people.”

According to RFI, some of the locusts currently invading India are more than 5km long and 2 km large (10 square km)…

Additionally, once they grow wings they can “fly up to 150 kilometers per day and may travel nearly 2,000 kilometers in their lifetime to find a favorable environment for breeding.“

They originated in Africa and the Arabian Peninsula after heavy rains caused by a series of cyclones in the Indian Ocean in 2018 and 2019 produced conditions for locusts to greatly multiply.

Early spring rains in Iran hatched the local population that was quickly augmented by more desert locusts blown in from Africa and the Arabic countries.

By February 2020, Iran was battling swarms of the ravenous insects.

Mohammad Reza Mir, a spokesman for the Iranian Agricultural Ministry’s Plant Protection Organization, said at the start of May that “the density of locusts in the swarms is so high that a 10-15 centimeter layer of dead locusts forms on the ground after spraying pesticides.“

Mir said on May 15 that locusts had devoured fields and orchards over some 200,000 hectares in the seven southern provinces and that Iran’s military had offered to help battle the pests.

Pakistan had already declared a national emergency at the start of February as locusts stripped fields and orchards as swarms from last summer’s breeding made their way through the Balochistan, Sindh, Punjab and Khyber Pakhtunkhwa provinces.

A June 1 report from Nikkei Asian Review said the locusts had “already devoured considerable quantities of crops in over 60 districts” in provinces throughout Pakistan. 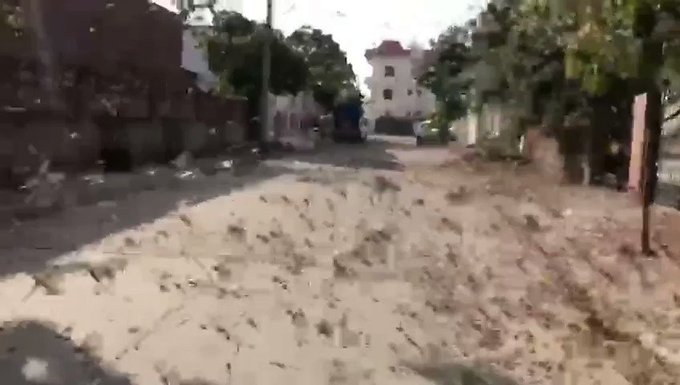 67 people are talking about this

The same report noted that locusts had crossed into India and were in northwestern Rajasthan, northern Punjab, western Gujarat, and central Madhya Pradesh.

Many agricultural specialists are predicting a second wave of locusts to start making their way from Africa and the Arabian Peninsula toward Iran, Pakistan, and India at the beginning of the summer.

Locusts have been destroying crops in eastern Turkmenistan and western Uzbekistan in recent weeks, although officials there have not commented on it very much.

Turkmen authorities have not mentioned the locusts at all, though RFERL’s Turkmen Service, known locally as Azatlyk, reported that locusts had spread over some 35,000 hectares of land in the Kerki district of Turkmenistan’s eastern Lebap Province, devastating crops.

RFE/RL’s Uzbek Service, known locally as Ozodlik, reported that Uzbekistan’s Emergency Situations Ministry announced on May 25 it was already taking measures to battle an invasion of locusts from Turkmenistan.

There were reports of swarms of locusts appearing in the Kashkadarya, Surhandarya, Namangan, and Ferghana provinces.

But the locusts in Central Asia do not appear to be the same desert locusts plaguing Iran, Pakistan, Afghanistan, and India.

On May 19, Uzbekistan’s Agriculture Ministry denied that the locusts eating crops in Uzbekistan had come from Turkmenistan, but in explaining where they did originate from, the ministry noted “there are more than 150 types of locusts in the country, 10 of which can cause serious damage to crops, pastures, and other plants.“

The most common of these 10 types is the Moroccan locust, which is found throughout Central Asia and Afghanistan.

At a May 29 briefing, Almabek Mars, the chairman of the state inspection committee of Kazakhstan’s Agriculture Ministry, said that “according to projected data for 2020, swarms of locusts are expected to cover an area of 554 hectares,” naming three types: the Italian prus, the Asian, and the Moroccan, as being the invaders.

Mars said some $3.6 million was earmarked to battle locusts in Kazakhstan this year.

The FAO promised to provide technical support to Kyrgyzstan to combat the locusts, predicting that without such help some 120,000 hectares of crops and pastureland could fall victim to the insects.

So far, Kyrgyz authorities have not reported any major problems with locusts, but the pests are reported in parts of Kazakhstan and Uzbekistan that border Kyrgyzstan.

Farmers in the Khatlon region’s Vakhsh district say locusts have stripped their grapevines of their fruit and complain they have received little help from the state while the price of insecticide to fight the pests is prohibitively high.

The battle against the locust plague is something that none of these countries can afford to lose as their full harvests will be particularly needed this year amid the problems caused by the spread of the coronavirus.

Many of the governments in these countries told people weeks ago to grow as much food as they could at home to offset expected shortages at the end of the year and first quarter of 2021. (Click to Source)

100% FREE ONLINE RECOVERY PROGRAMto anyone who wants to fully recover. We are a Biblical Online Recovery Outreach Program that is life changing and empowering. Adult & Teen Challenge Certified Teachers and certified Life Coaches will be working with you, and your loved ones, by video conference and phone with 24/7 support by text, chat and email. Contact us today and receive our gift of recovery

Is your loved one addicted? Are you missing the signs? CLICK HERE.