A barrage of lightning strikes numbering in the tens of thousands pummeled Washington state as multiple waves of thunderstorms moved through on Saturday.

Statewide, there were 86,714 lightning strikes detected by the National Lightning Detection Network. That’s about 62% of the state’s annual lightning average and more than the entire lightning the state received in 2006 (82,710).

The first wave of lightning storms went through in the morning, bringing an early wake up call to those trying to sleep in.

In Western Washington, thunderstorms rolled up the I-5 corridor, triggering some rare Severe Thunderstorm Warnings with two lightning strikes exploding trees in Kirkland and Woodinville.

“I could tell it was close because the whole house shook and I could hear what sounded like a crack,” one neighbor said. “Then a piece of wood came flying into our yard!“

A tree in Woodinville didn’t fare any better:

Check out this lighting strike off Woodinville -Duvall Road. Remember to stay inside during lighting storms #wawx 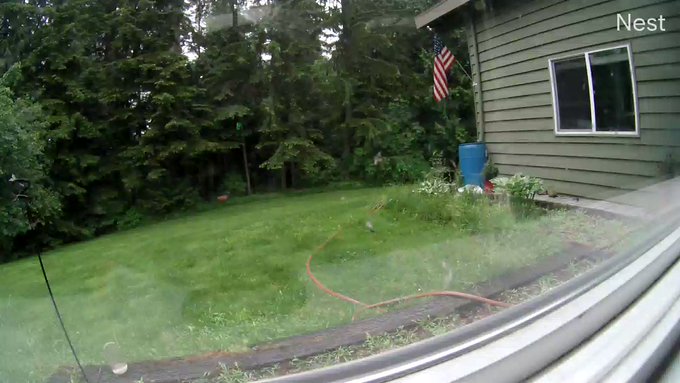 In Western Washington, sensors with the National Lightning Detection Network calculated 15,755 lightning strikes – 4,119 that struck the ground (the rest were within the clouds).

A second line of severe thunderstorms then moved into Central and Eastern Washington Saturday evening, bringing wind gusts of 60-70 mph and large hail.

And of course, amid all the chaos, a whole lot of lightning.

Trees were reported down in Prosser, Union Gap and Wenatchee with a wind gust reported to 60 mph in Pullman and 58 mph in Spokane.

Statewide, there were 86,714 lightning strikes detected by the National Lightning Detection Network. That’s about 62% of the state’s annual lightning average and more than the entire lightning the state received in 2006 (82,710).

It’s the second year in a row the state has been hammered by lightning. Last year the state saw over 250,000 strikes.

Just how anomalous was the weather in #WAwx and #ORwx yesterday? Well…The NLDN detected 119,639 total #lightning events across the two states yesterday. The annual average for Washington + Oregon is 439,635, so 27.2% of the annual lightning occurred in just 0.27% of the year! 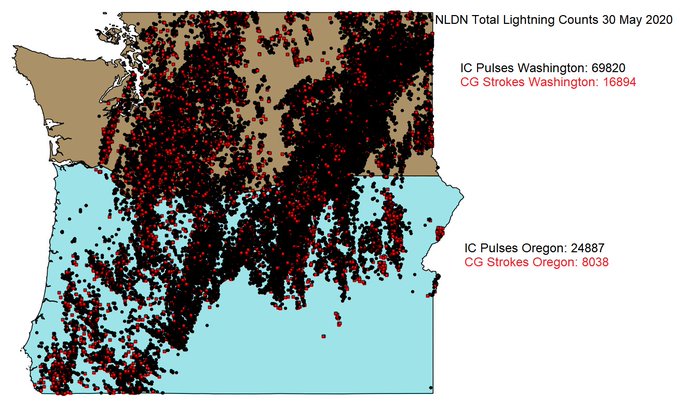 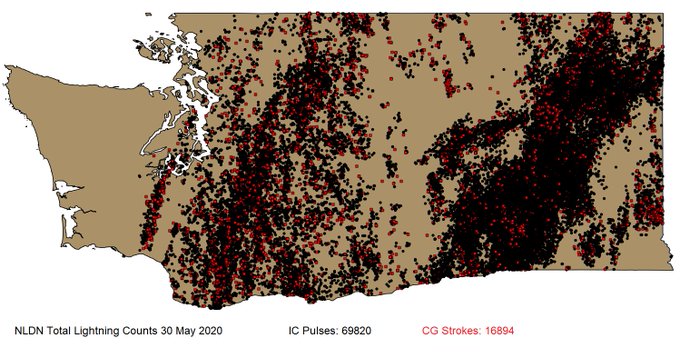 22 people are talking about this

Oregon wasn’t hit quite as hard with 32,925 strikes Saturday — about 11% of its annual average.

But combine the two states together and Vagasky says the 119,639 strikes was about 27% of the region’s annual average in just 0.27% of the year!

Just how anomalous was the weather in #WAwx and #ORwx yesterday? Well…The NLDN detected 119,639 total #lightning events across the two states yesterday. The annual average for Washington + Oregon is 439,635, so 27.2% of the annual lightning occurred in just 0.27% of the year!

44 people are talking about this

About the only place spared in Washington was along the coast and Olympic Peninsula. The track of the storm kept most of the activity into and east of Kitsap County.

It will be interesting to see how many wildfires are ignited. (Click to Source)

One thought on “Just How Anomalous Was the Weather in Washington This Weekend? Almost 87,000 Lightnings Struck Washington State on Saturday – It’s Nearly 2/3 the Annual Average!”