Treasury Secretary Steven Mnuchin said Tuesday that the Trump administration wants to send checks to Americans “in the next two weeks” in an effort to help people cope with the economic cost of the coronavirus pandemic.

“We’re looking at sending checks to Americans immediately,” Mnuchin said during a press briefing from the White House. “Americans need cash now, the president wants to get cash now. I mean now—in the next few weeks.”

“The president has instructed me we have to this now,” Mnuchin added, though did not give specifics, except to say that the amount would be significant and that millionaires would not receive it.

Mnuchin’s comments came as the White House is in negotiations with lawmakers on Capitol Hill for Congress to approve a sweeping economic stimulus package to help U.S. businesses and taxpayers deal with the economic fallout from the rapid spread of the novel coronavirus.

Mnuchin, on Tuesday, also announced that the Treasury Department would not extend the deadline to file taxes by the April 15 deadline, as much of the tax filing can be done online.

“We encourage Americans who can file taxes to continue to file taxes on April 15 because for many Americans, you will get tax refunds and we don’t want you to lose out on those tax refunds,” Mnuchin said.

Mnuchin added that if individuals or corporations owe money to the Internal Revenue Service after filing their taxes, those payments now are able to be deferred for up to 90 days interest-free.

“If you owe a payment to the IRS, you can defer up to $1 million as an individual, and $10 million to corporations, interest-free and penalty-free for 90 days,” Mnuchin continued. “File your taxes, you’ll automatically not get charged interests or penalties.”

Mnuchin is planning to outline a nearly $850 billion package during a lunch with Senate Republicans Tuesday, which Trump administration officials hope to have approved by the end of this week. 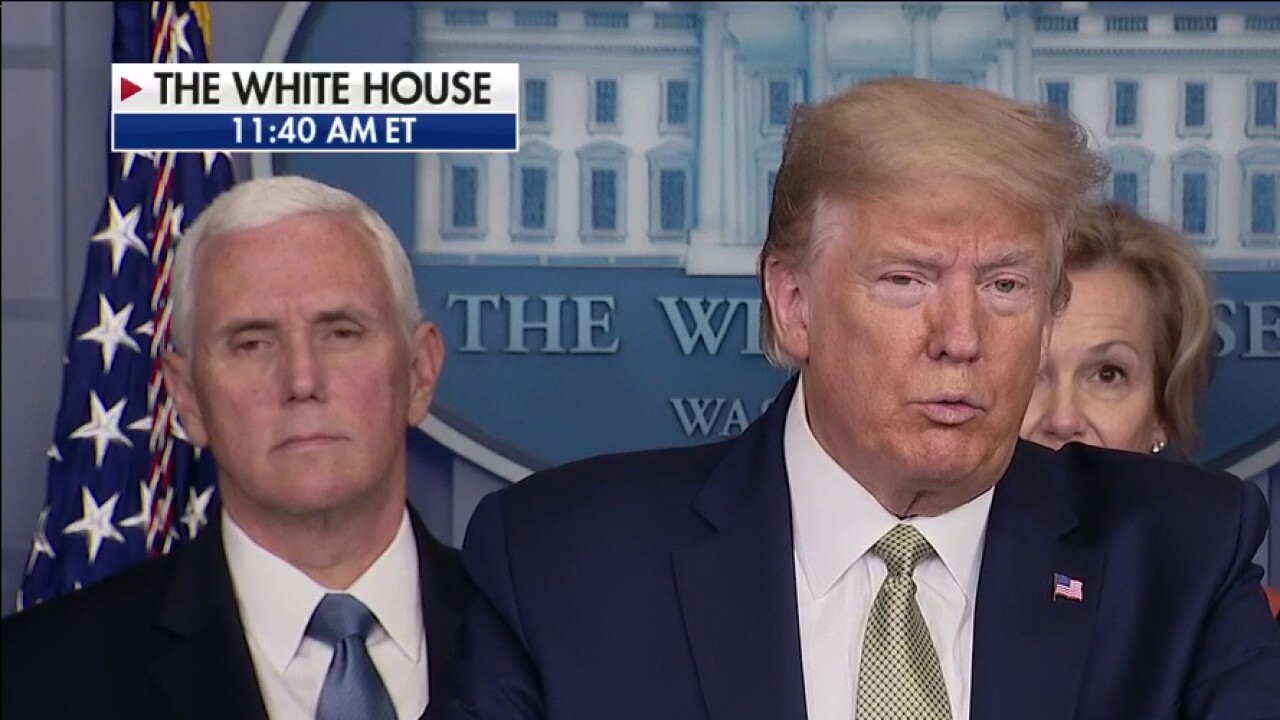 “The Senate will not adjourn until we have passed significant and bold new steps above and beyond what the House has passed to help our strong nation and our strong underlying economy weather this storm,” McConnell said.

The Trump administration’s stimulus package is bigger than the 2008 bank bailout, and the 2009 American Recovery and Reinvestment Act, which was passed and signed under former President Barack Obama, and totaled $787 billion to help stabilize the economy about 14 months after the last recession began.

Trump, during the press briefing Tuesday, said there was “great spirit” among lawmakers with regard to the plan. “I can say that for Republicans and Democrats.”

Meanwhile, the president and the coronavirus task force, which is led by Vice President Pence, touted the administration’s progress on testing for COVID-19.

Also on Tuesday, the president announced that the Food and Drug Administration (FDA) has announced new policies to increase testing.

Pence said that testing is now available in all 50 states, and announced that “state health authorities can now authorize labs in their state and expand existing testing capabilities.”

Pence also said the administration has continued to expand its “public-private partnership” with “vast commercial labs around the country,” which he said is “increasing access to coronavirus testing.”

“This is greatly expanding access, even as we speak,” Pence said Tuesday.

“Experts say that if every American acts on the coronavirus guidelines, we can see a substantial reduction in the spread, but as the president said, it will take all of us to do it,” Pence said, noting those guidelines rolled out by the White House and CDC Monday which included social distancing, limiting social gatherings to groups of less than 10 individuals, and staying at home.

“For the American people, as a whole, the risk of serious illness remains low,” Pence said.

The president weighed in on the guidelines, adding that he “would recommend that people enjoy their living rooms,” and urged young people to do their part.

One guideline, specifically, states that: “If you are an older person, stay home and away from other people.”

Another states: “If you are a person with a serious underlying health condition that can put you at increased risk (for example, a condition that impairs your lungs or heart function or weakens your immune system), stay home and away from other people.”

“We have to fight that invisible enemy, I guess unknown, but we’re getting to know it much better,” Trump said of the virus. “We are looking to save a maximum number of lives.”

The president also announced that he has been having open conversations with governors across the nation, leaders in the fast-food, pharmaceutical and grocery industries; and will meet with leaders of the tourism industry on Tuesday.

“We’re taking aggressive action now as one nation and one family so that America can rebound stronger frankly, stronger than ever,” he said.

Trump announced a national emergency on Friday. The president also announced a temporary halt on air travel to the United States from Europe, now including flights from the United Kingdom, but excluding those carrying cargo.

When asked Tuesday whether he would limit domestic travel, the president replied: “It’s possible.”

The coronavirus task force also predicted Tuesday that the number of cases in the U.S. could peak in approximately 45-days.

As of Tuesday morning, there were more than 4,660 confirmed cases of coronavirus in the United States, in 49 states, including Washington, D.C. The U.S., so far, has seen 85 coronavirus-related deaths. (Click to Source)

The Associated Press contributed to this report.