Two more Republican lawmakers — GOP Reps. Doug Collins of Georgia and Matt Gaetz of Florida — revealed Monday they had contact with the Conservative Political Action Conference (CPAC) attendee who has since been diagnosed with coronavirus, saying they are not experiencing symptoms but will self-quarantine out of an abundance of caution.

Both Collins and Gaetz are pro-Trump Republicans who have been with President Trump since CPAC: Collins shook Trump’s hand and joined him for a visit to the CDC in Atlanta on Friday. He also met with Trump at the White House last Tuesday, several days after the Feb. 26-29 conference.

Gaetz was spotted riding on Air Force One on Monday as he learned the news. White House officials said when Gaetz learned he was in proximity to the man with coronavirus at CPAC, he sat by himself in a section of the president’s plane. 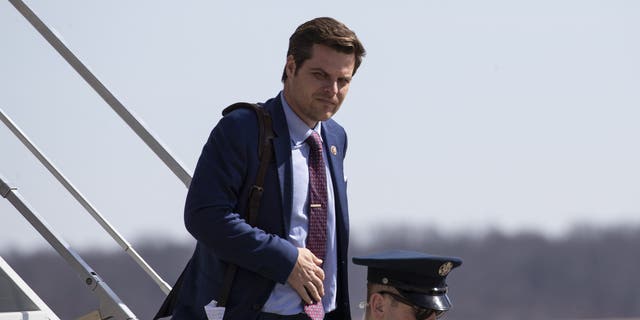 That makes four Republican lawmakers who have said they interacted with the CPAC attendee who tested positive for COVID-19, after announcements over the last day from Texas Sen. Ted Cruz and Arizona Rep. Paul Gosar.

Cruz’s office released an update on the senator, saying he feels fine: “Sen. Cruz feels great, has not exhibited any symptoms of the coronavirus in the last 11 days, and is not currently experiencing any symptoms.”

Collins said Monday it was a photograph that led CPAC to determine his interaction with the sick attendee.

“This afternoon, I was notified by CPAC that they discovered a photo of myself and the patient who has tested positive for coronavirus,” Collins said in a statement Monday. “While I feel completely healthy and I am not experiencing any symptoms, I have decided to self-quarantine at my home for the remainder of the 14-day period out of an abundance of caution.”

This afternoon, I was notified by CPAC that they discovered a photo of myself and the patient who has tested positive for #COVID19.

While I am not experiencing any symptoms, I have decided to self-quarantine out of an abundance of caution.

7,389 people are talking about this

He added: “I will follow the recommendations of the House Physician and my office will provide updates as appropriate.”

Gaetz’s office said he planned to close his Washington office as he awaited test results.

“Congressman Gaetz was informed today that he came into contact with a CPAC attendee 11 days ago who tested positive for COVID-19,” read a tweet from the congressman’s account, adding that “while the Congressman is not experiencing symptoms, he received testing today and expects results soon.”

Congressman Gaetz was informed today that he came into contact with a CPAC attendee 11 days ago who tested positive for COVID-19.

5,853 people are talking about this

The attending physician for the U.S. Capitol acknowledged Monday that the patient had contact with “several” members of Congress at CPAC. In a statement Monday, Dr. Brian Monahan said that the individual who has been diagnosed with coronavirus was “able to recall specific names of people he had contact with during the meeting.”

Last week, Gaetz got attention for wearing a gas mask on the House floor and in the Capitol building.

Reviewing the coronavirus supplemental appropriation and preparing to go vote. 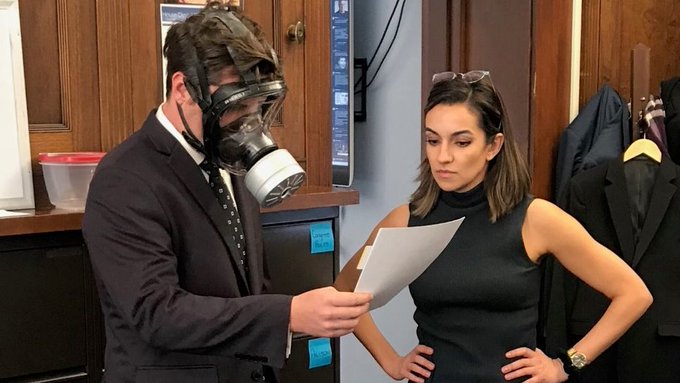 24.5K people are talking about this

The White House was made aware of the CPAC attendee’s diagnosis, as both Trump and Vice President Pence attended and spoke at the conference which took place from Feb. 26 to 29. The White House said there is no indication that Trump or Pence was in close proximity to the stricken attendee.

Matt Schlapp, chairman of the American Conservative Union, which puts on CPAC, said he had a brief and “incidental contact” with the patient. He is also self-quarantined at this time, despite feeling no symptoms. Despite not having contact with the individual, Trump did come into contact with Schlapp.

Meanwhile, Trump downplayed the threat of coronavirus on Monday, noting that the “common flu” kills thousands of Americans each year and that “life & the economy go on.”

“So last year 37,000 Americans died from the common Flu. It averages between 27,000 and 70,000 per year,” Trump tweeted Monday. “Nothing is shut down, life & the economy go on. At this moment there are 546 confirmed cases of CoronaVirus with 22 deaths. Think about that!”

According to the CDC, during the 2018-2019 flu season in the U.S., an estimated 35.5 million people were sick with influenza and approximately 34,200 people died from the illness. (Click to Source)