New research has found that Chinook salmon in the Puget Sound contain a huge amount of harmful chemicals and drugs, posing a threat to wildlife.

Chinook salmon (Oncorhynchus tshawytscha) have been found to contain up to 81 drugs from the contaminated Puget Sound, along the coast of Washington state.

During research, drugs including Prozac, Advil, Lipitor and even cocaine were discovered within the salmon’s flesh. Supposedly, these substance levels have rocketed due to high drug use within the local area.

Nonetheless it is thought that nearby waste water plants are not filtering the chemicals properly. Leaky septic tanks are also to blame for this chemical cocktail consumed by the salmon, a species listed as endangered on the Endangered Species Act.

In the search for evidence, samples were collected over a two-day period, and both chinook salmon and local staghorn sculpin were tested.

“We analysed samples for 150 compounds, and we had 61% of them detected in effluent,” says Jim Meador, environmental toxicologist at The National Oceanic and Atmospheric Administration’s (NOAA) Northwest fisheries science centre in Seattle.

Not only that, but substances found within the salmon from these tests include Valium, nicotine, caffeine, antiseptics and a lot of antibiotics. Furthermore, it is thought that there may be more highly concentrated substances in deeper waters and areas close to outfall pipes. 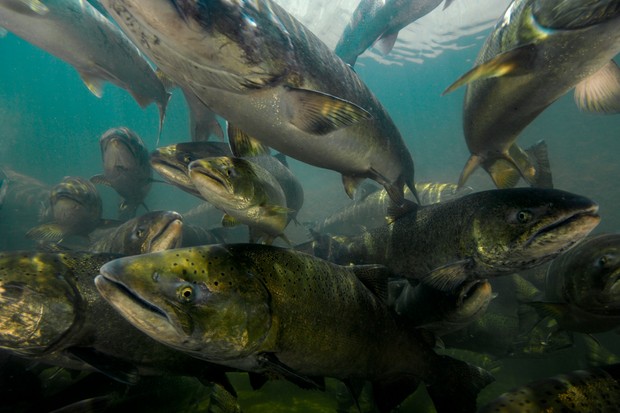 However, scientists are not concerned about the effect these chemicals are having on humans. The concern is with wildlife.

Other research by Meador has shown that the mortality rate for juvenile Chinook salmon migrating through the contaminated Puget Sound is double than of fish elsewhere. (Click to Source)

Read the paper in Environmental Pollution.