They continue to evangelise and help one another

With the world in turmoil as the coronavirus outbreak sweeps across Asia and threatens other continents, Christians in Wuhan, at the epicenter, are using the calamity to spread their faith. Their efforts deserve to be recorded as an exemplary example of Christian testimony.

On February 11, the New York Times’ China correspondent Chris Buckley, who has been reporting on the ground in Wuhan since the lockdown and escalation of the outbreak, tweeted that despite the apocalyptic feel of a megacity in quarantine, he was surprised to encounter Christian evangelists handing out gospel leaflets packaged together with face masks.

Wuhan can feel a little end-of-times. Still I was surprised to come across Christian evangelists in one neighborhood cheerfully handing out leaflets and painfully flimsy masks. 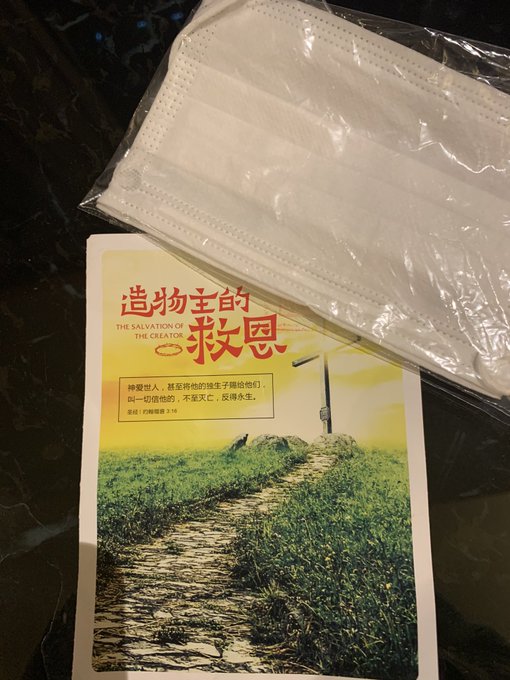 66 people are talking about this

It was a welcome respite from the misery, confusion and anger the city has seen since the start of 2020, a sign of hope even in extreme circumstances.

Mr Buckley was not the only recipient of these gospel leaflets calling for the conversion to Christ in the middle of this epidemic-ravaged city.

A video which has generated 100,000 views on the Chinese social networking app WeChat shows that a group of Christians from Wuhan has been handing out masks and other protective gear their church received from donations across the world. Together with the masks, they slipped in the leaflets Mr. Buckley saw which quotes John 3:16 and calls for the salvation of souls.

A few days later, voice recordings and writings of the man behind the actions, a Wuhan-based missionary known as Preacher Luo, also started to circulate. In the recording, Luo stated that the street preaching and leaflet distribution has been happening for more than a decade. Not even the virus can stop them from preaching the Gospel, he declared, albeit with volunteers wearing protective gear.

Luo believes that now is an opportunity to demonstrate God’s love and the message of hope, as many Wuhan inhabitants suffer from trauma, despair and frustration.

His actions have sparked controversy. Some Christians argued that it is dangerous to go out at these times and expose believers to the virus through human interaction. Other Wuhan churches have started operations online to help with the virus and maintain a life of faith for their congregants. Some have set up hotlines for people to call in for help and others are posting sermons online.

A joint prayer committee of pastors was set up under the leadership of Pastor Huang Lei, formerly a medical professor and now the head pastor of the Wuhan Roots and Fruits Church. It coordinates online sermons, checks up on vulnerable and diagnosed congregants and distributes donated goods to assist those in need.

The Roots and Fruits Church has ceased all physical gatherings but through its YouTube channel and WeChat account, Pastor Huang released a series of sermons and called for donations and assistance via slickly produced short videos.

One of the most widely shared videos calls for all Chinese Christians to engage in fasting and vigorous prayer for at least three days to seek divine intervention in the crisis.

Other videos have featured advice on how to continue worshipping online and at home, how to obey God’s will in this difficult time, as well as congregants sharing scenes of their worshipping at home with their family and one winsome clip of a church member singing hymns with his children as he plays the guitar in the relative safety of their apartment.  Despite the adversity, the online ministry is updated regularly, and congregants use technology to comfort each other.

As one of Wuhan’s largest house churches, despite all the repression and adversity it has faced since its founding, the Roots and Fruits Church has proved to be amazingly resilient.

Prior to the coronavirus crisis, it continued to grow and attract hundreds of professionals and families alike since its founding as a seven-member prayer group back in 2002.

Its organization contrasts with the chaos Wuhan saw in the early days of the outbreak, as the coronavirus paralysed the government and exposed the incompetence of the local authorities. Churches often delivered masks and protective gear accurately and efficiently in the early days of the outbreak, whilst the rest of China recoiled in horror as the government-sponsored Wuhan Red Cross failed to distribute much needed resources to the frontlines, leaving many medical staff exposed and frustrated.

As many N95 masks lie idle in the Red Cross warehouse or get siphoned off by Wuhan local officials, Preacher Luo and his team managed to deliver 400 N95 masks, 1000 gloves and 1000 protective goggles to the Wuhan Central Hospital, the workplace of the deceased whistleblower Dr Li Wenliang.

Most of those donations were sent directly by overseas believers from Taiwan, Hong Kong and North America. An additional 30,000 face masks were handed out on the street by the members of Luo’s team in the first week of the quarantine.

Besides churches and street preachers, individual Christians in Wuhan have also assisted the sick. As cases skyrocketed from late January, many thousands of patients did not have access to hospital beds. Desperate people were being turned away every day from hospitals.

A Christian engineer, whose own family had been affected by the outbreak, used his WeChat public account to post calls for assistance and coordinate information to help them find medication and a hospital bed.

For days, China’s Weibo was also inundated with individuals posting pleas for help, many of which were scrubbed from the internet after the country’s overzealous censors returned to work. However, the engineer had a network of volunteers, many of them Christian, who helped with on the ground information and managed to give several families medical assistance. At a time when the government has failed its citizens, these WeChat volunteers prove how an atomized society urgently needs to nourish civil society.

Christians in Wuhan are living proof of the best qualities of humanity; they offer us a glimmer of hope in this world full of suffering and paranoia towards the epidemic. Their composure and efficiency, as well as their love and strength, stem from their faith. (Click to Source)