Some parts of Iran have received up to six meters of snow in the last few days.

The unprecedented amounts of snow buried people, houses, cars and even herds of sheep in the northern parts of the country.

As already introduced lately, the province of Gilan in Iran was engulfed by an unprecedented snowstorm that buried towns, blocked highways and cut off hundreds of villages from the outer world since about a week now.

In some secluded regions, surprised farmers even had to free herds of sheep that had been buried in meters of snow during the blizzard-like storm.

Massive snowstorm in north & northwest #Iran
Even the sheep were engulfed by the snow.

Hundreds of thousands are without water, electricity & food as authorities have failed to provide any aid. 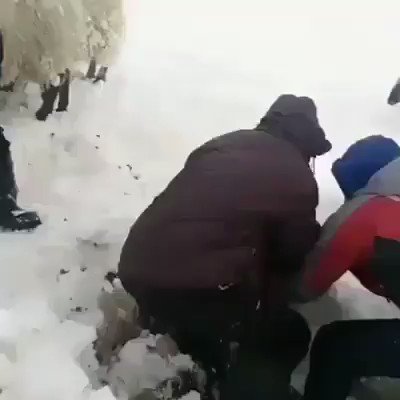 122 people are talking about this

But it seems to me that those extreme storms are so sudden and powerful that people have not enough time to prepare and to protect their animals.

A similar event occurred about one month ago in Iceland, when a extravagant blizzard engulfed the island – and those bomb cyclones seem to become a new normal in the North Atlantic – and buried horses in meters of snow.

These rescuers are wonderful human-beings! Honestly, I had no idea it snowed that much there. Can we say weather modification warfare. (Click to Source)