(Natural News) While the communist-infiltrated World Health Organization still refuses to declare the coronavirus outbreak a “pandemic” — absurdly claiming there are no sustained local outbreaks outside of China — the truth about this accelerating infectious disease outbreak is rapidly starting to emerge from nations that aren’t fudging their numbers.

Confirmed infections in South Korea have exploded over the last 96 hours from just 30 cases to 602 confirmed cases. Local residents there are scrambling to purchase preparedness supplies, stripping shelves bare and leading to a sense of urgency. Some cities in South Korea have already taken on a “ghost town” vibe, with streets emptied and nearly all community functions shut down.

In Italy, confirmed cases have skyrocketed to 155 as an outbreak continues its exponential spread there, threatening all of Western Europe. A third death has been confirmed in Italy, and the Italian government has declared a national emergency. Italian officials, notably, are far more honest than U.S. officials in reporting these cases, even though they have so far failed to identify “patient zero” there, who may never be found.

Confirmed cases are exploding in Japan, too, which is no surprise given Japan’s criminally negligent handling of the Diamond Princess fiasco that ultimately led to thousands of potentially infected cruise passengers being released onto the streets of Tokyo.

Iran is also experiencing an explosion in deaths (now 8), and if the mainstream media’s “2% mortality rate” is to be believed, that would indicate there must be over 400 infected people in Iran, most of whom haven’t yet been identified (meaning they are spreading it to others).

Around the world, non-China infections are now doubling every 4 days or so, soaring to nearly 2,000 infections outside of China.
Here’s the current official count as of Feb. 23rd: 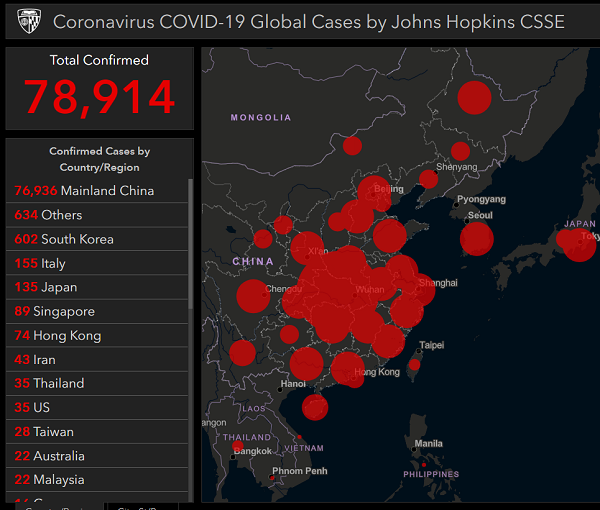 If this rate is sustained, there will be over 40,000 infections across the globe by the end of March.

The CDC appears to be covering up over 1,000 infections in the USA

As we documented 12 hours ago in this bombshell Natural News story, this is all taking place while the U.S. CDC appears to be actively engaged in a coordinated cover-up to withhold testing kits from U.S. hospitals and clinics, resulting in a situation where only 3 U.S. states are conducting any testing at all. That means 47 states are carrying out zero coronavirus testing, and the CDC itself has only tested 414 people in the entire nation. This, despite the fact that over 250,000 Chinese students attend U.S. universities, and unknown thousands traveled back to the United States after the recent Chinese New Year lockdown in Wuhan.

The CDC’s new strategy is to avoid testing anyone as a way to avoid reporting confirmed infections. In fact, the CDC has released a coronavirus testing flow chart that quite literally prohibits any testing of Americans who have been infected in the United States: 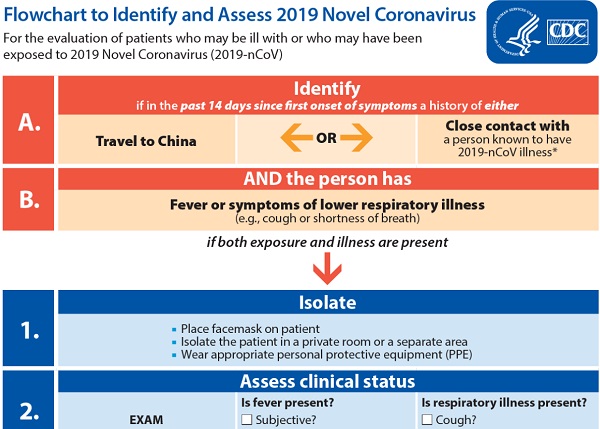 As you can see from the chart, any American showing symptoms but who didn’t travel from China and who doesn’t realize they’ve had any close contact with an infected person will NOT be tested for the coronavirus.

The actions of the CDC now border on criminal negligence, potentially costing the lives of tens of millions of Americans if the outbreaks which are already taking place in the United States are not honestly disclosed and dealt with.

U.S. government seems to be trying to “seed” coronavirus infections into Los Angeles

Meanwhile, the U.S. government just tried to transfer up to 50 confirmed infected patients to the Fairview Development Center in Costa Mesa, California, a kind of residential community with zero controls for level-4 bioweapons or infectious diseases. This center is right next to Huntington Beach / Newport Beach in California, just south of Los Angeles where over 10 million people could spread the disease if containment fails. See this map:

If the U.S. government were literally trying to cause a nationwide outbreak, they couldn’t have picked a better place to release the virus and watch it spread across Los Angeles, then the entire nation.

We are either dealing with unprecedented criminal negligence here or a deliberate campaign to spread the virus across America. Either way, the infections are mounting across America but the CDC refuses to test anyone who got infected in America.

As a result, this epidemic is exploding across the USA entirely unseen and unreported by the disastrously dishonest fake news media and the criminally-run Big Tech speech police that protect the “official” narrative.

Listen to one of my podcasts from the Health Ranger Report channel on Brighteon.com, describing how the CDC is warning U.S. hospitals to prepare for a “surge” in coronavirus patients: (Click to Source)