Deadly diseases have traditionally been spread by advancing and retreating armies and merchants who sought goods in faraway nations. The most consistent spread of plagues was along the trade routes as merchants sailed to the Far East for exotic goods to satisfy the Europeans’ ever-increasing desire for the “good life.” Travelers, soldiers, and merchants often returned home with an unknown, undesirable, and unpredictable pestilence.

Pestilences, famines, plagues, and wars have an appalling record in mankind’s history having produced enormous problems of public chaos, interruption of labor, economic disaster, revolution, and demise of whole populations. People panic, lose or quit their jobs, live from one day to the next, lose hope for the future, have no confidence in public officials, show no concern for others in the same circumstances, and often turn to crime to sustain themselves.

In 189 A.D., a great plague—thought to be smallpox—attacked the Roman Empire and 2,000 people died each day in Rome. The city was in trouble at that time with internal strife, debased currency, encircling barbarians, and demoralization of the populace. Those complex problems were made infinitely worse by 2,000 deaths daily. The labor supply dwindled, military campaigns were stopped or hindered, day-to-day business operations were paralyzed, and production of food almost ceased. The weakened Empire was grinding to a halt. 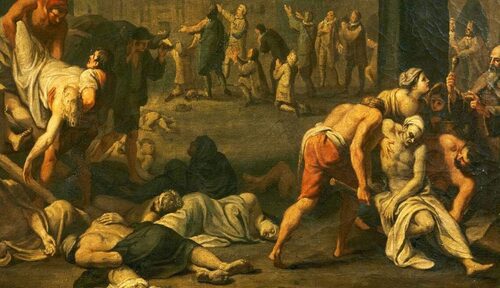 The nascent coronavirus is producing the same reaction that all past pestilences and plagues have created throughout history. Of course, this threat may turn out to be a minor problem in the overall scheme of things during the early days of 2020—or it may be a scourge of biblical proportions.

During historical disasters, it was common to have one disaster after another with everyone making a connection of them and ascribing them divine origin. In our day, we see the coronavirus epidemic accelerating while locust swarms (the size of cities) attack East Africa, the Middle East and China. Discussion has followed about these being indications of the last days or the end of the world.

Terrified men have reacted the same way in all ages to invisible, imminent, and inevitable plagues and disasters.

History clearly reveals that the first reaction to a threat on your life is always self-preservation, the God-given impulse to preserve the human race. You will fight to overcome the initial fear of the disease or destruction or terrorism and make decisions to guarantee your personal safety. Everything else in life is secondary and delayed so you can concentrate on saving yourself and family.

After one is satisfied that he/she and the family are safe, then the humanitarian and altruistic spirit kicks in with a desire to help members of various social groups: church, school, lodge, workplace, union, club, etc. However, this philanthropic action will almost always cease if there is a threat to personal safety.

Next, there is a normal tendency to identify the reason for the tragedy they are facing with an accompanying desire to alleviate the problem. Ancient, pagan societies naturally thought their god was angry with them; consequently, they decided to sacrifice the daughters of their most elite citizens rather than daughters of the poor. Some doubled the number of victims, thinking that would placate their god.

When men thought they were too civilized to accuse the gods for catastrophic events, they instead blamed Jews, lepers, gypsies, and other minorities!

Finally, one adjusts to the threat as much as physically possible until the plague disappears, the storm subsides, the earthquake stops, or terrorists flee to the hills. If the disaster continued, men thought to be principled revealed their convictions were shallow, not deep, as families were deserted, friendships were severed, and some even resorted to dangerous, depraved, and deadly actions.

At this juncture, men do some very stupid things as they seek to work around or out of the threat. Often they pass laws that are unnecessary, unfair, and unlawful.

The above reactions were observed when malaria lashed the face of Greece.

The malarial parasite—passed to humans by the female mosquito— killed infants, weakened unsuspecting children, forced the freeing of the most productive farmlands, and helped produce Greek citizens who were listless, lazy, and licentious. As a result, the power and glory of ancient Greece became a derisive memory.

It is said that men refused to marry or, if they married, refused to have children. If they had children, they refused to rear them. Men went out of their way to be ostentatious, avaricious, and indolent. 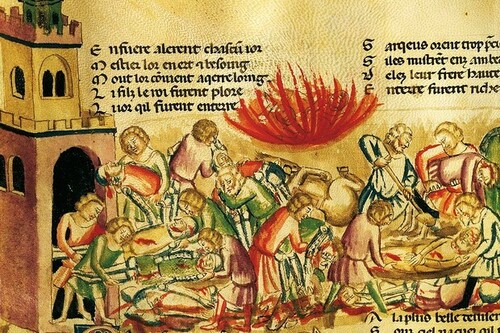 The pandemic plague of Justinian (bubonic plague known as the Black Death) in the sixth century had a sweeping influence and permanently transformed the social fabric of the world. It contributed to the end of Justinian’s reign. The plague, starting in Africa, quickly spread to Egypt and the Mediterranean area. It was preceded by many earthquakes and volcanic eruptions–Vesuvius, in 513, was one–and famines that dropped a blanket of terror and death over Europe, the Near East, and Asia. The worst natural occurrence was the earthquake and fire that destroyed Antioch in A.D. 526, killing almost 300,000 people.

Food production was severely disrupted followed by an eight-year famine. The farming system of the empire was restructured to eventually become the three-field feudal system that impacted all of Europe! Three-field system was a method of farming that represented a significant improvement of food production techniques. Very simply, in the old two-field system “half the land was sown to crop and half left fallow each season; in the three-field system, however, only a third of the land lay fallow.”

This change in food production was a major positive result of the plague.

The social and economic disruption caused by the pandemic marked the end of Roman rule and led to the birth of culturally distinctive societal groups that later formed the nations of medieval Europe.

During this plague of Justinian, crops could not be harvested, traveling and trade were reduced, and food and other items became scarce or unavailable. Many workers died resulting in a massive loss of labor, exacerbating the situation. The remaining workers, realizing their worth had multiplied, demanded much higher wages from major landowners. After all, they were poor but not stupid. Those workers had never had any chance of upward mobility, but were now able to purchase land now that land was available at depressed prices. These unprecedented conditions changed social conditions adding a middle class between serfs and landowners.

This was another sea change in man’s improved social and economic life.

The Black Death galloped through Europe again in the mid-1300s with a similar result of the plague of Justinian. It started in Sicily, jumped to France, Germany, Spain, and England then skipped to Russia, India, and other nations. Millions died and some villages were totally wiped out while some large cities lost 75% of their residents to plague. A third wave smacked Europe again in 1855 after starting in a remote China province, and by 1900 it had reached ports on every continent! Many millions died—again. The total death toll of bubonic plague is 75 million to 200 million.

Most of our politicians and physicians (who are often politicians) are hoping, maybe even praying (!) that the coronavirus won’t explode here. Hoping won’t protect us from a plague and praying will only help if we follow common sense health practices.

Wringing of the hands won’t do much good either. (Click to Source)

I have the best deal for my readers! Under $20 per month for unlimited access to board certified doctors. Virtual visits 24/7, 365. Nothing extra!