HUNDREDS of flights have been cancelled hours before the brutal Storm Ciara slams into Britain with violent gusts of 90mph paralysing the UK.

By CARLY READ
Flights in and out of European airports were cancelled as Britain’s biggest storm in up to seven years crept into Scotland and the Republic of Ireland, sparking severe weather warnings across the entire UK. Planes in and out of Glasgow, Manchester and Liverpool airports have also faced severe disruption, with Scotland also putting a 40mph speed limit on the Queensferry Crossing before cancelling it altogether. Gatwick and Heathrow airports have also seen disruption along with flights being either delayed by 45 minutes currently, or revised.

Up to 200 flights into and out of Europe were also cancelled as the storm – thought to be the most violent in seven years – began to swoop into Scotland and Ireland yesterday evening.

Irish airline Aer Lingus has advised passengers to check the status of their flights before leaving for the airport.

Meanwhile, a yellow alert for rain in Northern Ireland has been issued by the Met Office.

Flooding of a small number of homes and businesses is possible as well as difficult driving conditions, the forecaster said. 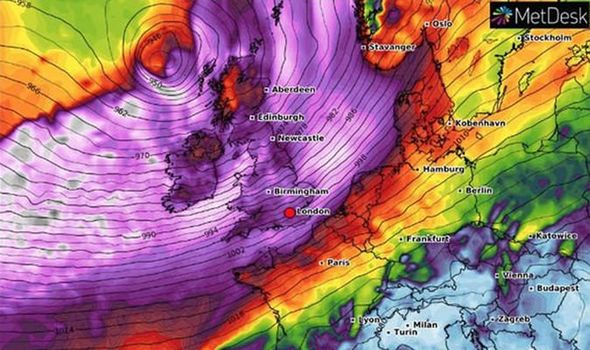 Flights have been cancelled hours before the brutal Storm Ciara slams into Britain (Image: WXCHARTS)

Met Office chief meteorologist Frank Saunders said: “Storm Ciara will bring damaging winds and heavy rain across the UK this weekend and we have issued a range of severe weather warnings giving people time to prepare for potential impacts of the storm.

“Winds will increase through Saturday across Northern Ireland, Scotland, northern England and Wales, before turning very windy across the rest of UK through the early hours of Sunday morning.

“Gusts of 50-60mph are expected quite widely across inland areas, with even stronger gusts of 80mph or higher along coastal areas, especially in south-east England and northern Scotland.”

The storm is fast-becoming a weather bomb with charts showing the sheer size of the storm being 1,000 miles wide.

Air pressure will plunge by 24 milibars by 12 noon on Sunday.

People planning to travel this weekend are being warned of widespread disruption to travel routes, and a number of sporting events have been cancelled this weekend.

Popular visitor attractions such as the Royal Parks will be closed on Sunday for safety reasons, and the RNLI are urging people to stay safe near the coasts.

The Met Office has issued multiple weather warnings for this weekend and into early next week.

The weather service has also recently extended its amber wind warning to include further swathes of the UK.

A widespread warning for wind was issued between 12pm until 11.59pm yesterday, affecting parts of northern Wales and northern England, and the entirety of Scotland and Northern Ireland.

Additionally a yellow warning for rain was issued across Northern Ireland, between 3pm until 12pm on Sunday. Another yellow rain warning was place between 9pm yesterday and 12pm on Sunday, reaching from Kelso to Dumfries in Scotland. (Click to Source)