The calendar might have said it was spring more than a month ago, but the physical signs of it around us told a much different story. According to officials data, this was the latest arrival of spring in 38 years of records for parts of Kansas and Oklahoma. Portions of Washington and Oregon also saw the latest spring start on record. In parts of the Plains, in places like South Dakota, Nebraska and even into Oklahoma, a late spring like this year’s only happens once every 10 or more years. Many farming fields are ruined and will not be planted this year. Otherwise, planting has been dramatically delayed.

Spring and its typical green growth arrived later than usual in much of the U.S., save for parts of the South, thanks to a stubborn weather pattern that most noticeably affected parts of the central and southern Plains, Northwest and northern New England.

Spring was more than 10 days later than usual in those areas, according to data from The USA National Phenology Network, which tracks the physical arrival of spring by looking at when leaves and other growth appears and blooms.

Using data that dates back to 1981, the group also examined how unusual this spring’s lateness was compared to previous years and came to the following results:

The absence of spring was due to a stubborn upper-level pattern with a southward dip in the jet stream over parts of the Northwest, Plains and Midwest for much of March and April. This funneled below-average temperatures into these regions at times.

Due to this chilly pattern, Marquette, Michigan, has received above-average snowfall (227.5 inches) and is experiencing its second-longest streak of temperatures below 70 degrees. The last time temperatures reached at least 70 degrees was September, 17, 2018, which was 238 days ago. The current record longest streak is 252 days.

The record will be tied if the temperature does not climb to at least 70 degrees by May 28. Based on the current forecast for Marquette, it is possible that a new record could be set. Here a summary for the USA:

Total catastrophe for US farming production

Some of the same locations in the Plains and Midwest with chilly temperatures also experienced very wet conditions. This combination of cold and wet has exacerbated the agricultural impacts of a late spring.

Snowmelt and heavy rainfall brought significant river flooding to parts of the Plains and Midwest in March. Many farming fields were ruined and will not be planted this year, according to the National Climatic Data Center (NCDC).

The Midwest Regional Climate Center noted that spring planting was delayed due to the wet and cold conditions in the region. As of the end of April, corn planting was behind the 5-year average in all Midwest states.

By May 12, only 30 percent of the nation’s corn acreage had been planted, 36 points behind the 5-year average. The corn planting in Illinois as of May 12 was the slowest on record, dating back to 1979, according to Karen Braun, global agriculture columnist at Thomson Reuters. 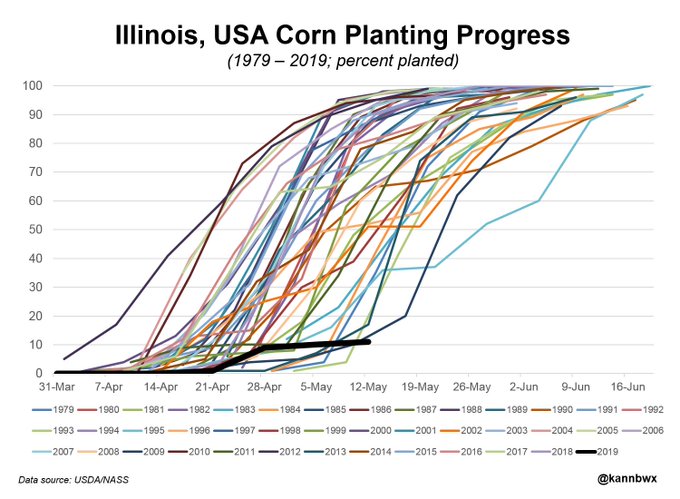 #Corn planting progress as of May 12 in Illinois was the SLOWEST in records back to 1979.

The soybean crop is also behind schedule, and as of May 12, the United States Department of Agriculture (USDA) said that just nine percent of the nation’s soybean acreage was planted, 20 points behind the 5-year average.

In addition to flooding, persistent cold and late-season snow in the Dakotas has not allowed the soil to warm up and has prevented crop planting, the NCDC reported in its April summary.

We have never had a year quite like this before, and U.S. food production is going to be substantially below expectations. I very much encourage everyone to get prepared for much higher food prices and a tremendous amount of uncertainty in the months ahead.

This is a major national crisis, and it is just getting started. Get ready and be prepared! (Click to Source)