After sunshine and pleasant weather grace California early this week, a powerful storm system will barrel into the state during the middle to latter part of the week. The return of a March-like weather pattern, driven by a large dip in the jet stream, will be the culprit for driving this rare storm into the West Coast. Another unseasonal Atmospheric River will cause chaos in California.

Rain will first move into Northern California on Wednesday before overspreading the rest of the state by Wednesday night and Thursday.

By the time the storm moves into the Four Corners region later on Friday, the foothills of the Sierra Nevada and parts of Northern and coastal California will receive between 1 to 3 inches of rain. The hardest-hit locations may receive as much as 4 or 5 inches of rain.

Even parts of the San Joaquin Valley will have to deal with showers and thunderstorms from Wednesday night into Thursday that could produce localized heavy downpours and some incidents of small hail.

It is extremely unusual for a storm system to bring this amount of rainfall across the state this late in the spring season.

The dry season — not so much.

These cities, as well as many other locations across the state, will receive two to three times their normal monthly rainfall in the span of only two or three days later this week.

Travel will turn slippery with numerous delays on the roadways after the recent stretch of generally dry weather. Motorists traveling on Interstates 5 and 80, as well as secondary roadways, should allow extra time to reach their destination and reduce speed to lessen the risk of hydroplaning.

Not sure about the May climatology / records for rainfall, but this seems like quite a lot heading thru middle-May.

Rainfall 3-5″ especially along coast … and up to 5-feet of snow in the Sierra.

Lengthy flight delays and cancellations both into and out of the major hubs along the West coast will also be likely, and some flights may have to be rerouted as gusty winds accompany the rain.

In addition, flash flooding of streets and poor drainage areas, as well as smaller streams and creeks, will be a danger to anybody living in flood-prone areas.

Abnormally chilly air will accompany the clouds and rain later this week, with high temperatures struggling to reach the lower to middle 60s F across the Central Valley on Thursday. Normal highs during the middle of May are in the 80s. 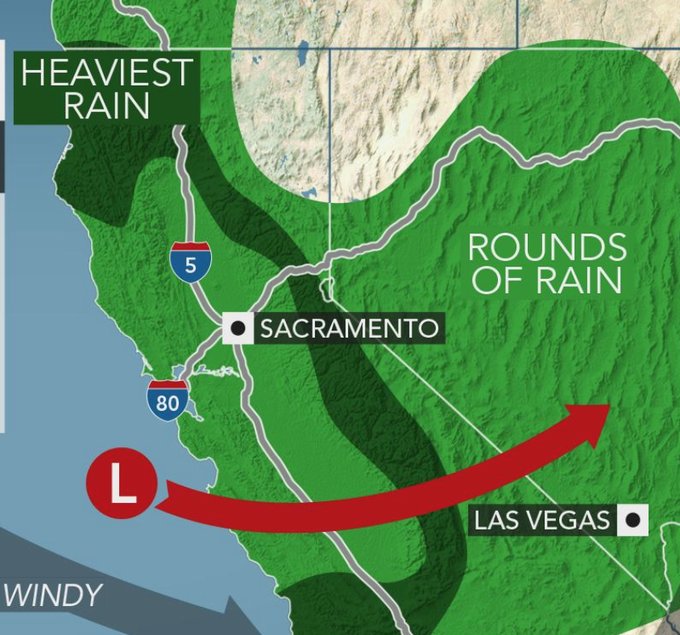 ‘Rare May storm’
A powerful storm system will barrel into California during the middle to latter part of the week. The foothills of the Sierra Nevada and parts of Northern and coastal California will receive between 1 to 3 inches of rain. https://bit.ly/2JD7lUQ #cawx #cawater

Showers may even reach Death Valley on Thursday and keep high temperatures only in the upper 70s after they soar above the century mark early this week.

Snow levels are forecast to drop as low as 6,000-7,000 feet in the Sierra Nevadaby Thursday and Thursday night, and up to a foot of snow is possible at the highest elevations. 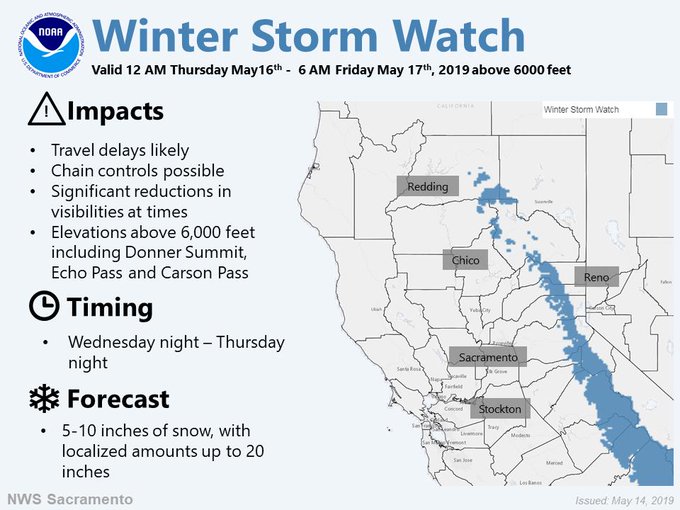 It is going to feel more like winter by the middle to end of the week. Snow is expected in the Sierra late Wednesday through Thursday night. A Winter Storm Watch has been issued above 6000 feet. #CAwx

Motorists traveling across I-80’s Donner Pass may even have to deal with snow on the roadway for a brief time if snowfall rates become high enough.

In addition to drenching rain and mountain snow, there is the potential for a few heavy, gusty and perhaps locally severe thunderstorms to be spawned, according to AccuWeather Senior Meteorologist Alex Sosnowski.

The greatest impact from the storms will be for hail and strong wind gusts. However, on occasion, severe thunderstorms can produce brief tornadoes and waterspouts. 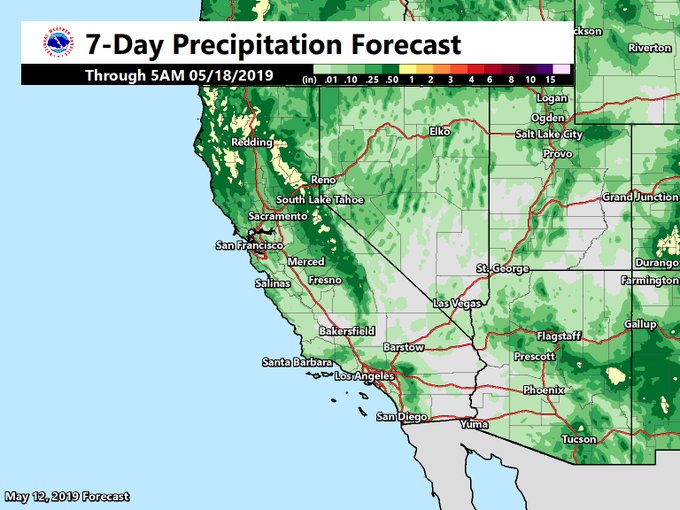 Wet weather returns mid to late this week. Here is an early projection on how much rain could fall through early Saturday. Stay tuned for updates as we get closer to the event. #cawx

“The potential for severe thunderstorms will extend well inland beyond California as the storm moves along to portions of Nevada, Arizona and Utah at the end of the week,” Sosnowski said.

With the copious amounts of rain and blast of chilly air ahead, water temperatures in streams and lakes will continue to run low well into June. Anybody attempting to cool off in the state’s waterways when heat returns will need to be aware of the dangers of cold water shock.

The heavy rain and mountain snow will have some benefits in the long run heading into the summer and fall.

“This late-season storm will help prevent a shortage of the water supply during the summer and fall across the state,” AccuWeather Senior Meteorologist Kristina Pydynowski said.

There is no drought & every dam in California is FULL. #ClimateCatastrophe #scam
Fake #climate scientists who predicted never ending drought look worse than crank astrologists.

Any early fire threat will also be minimized since the rain and cool air will help to keep the ground and vegetation across the state saturated and prevent it from drying out quickly.

The March-like weather pattern shows no signs of ending in the near future, with at least two more storms slated to barrel into the state from this weekend into the middle of next week. (Click to Source)