2019, will be the year when the farming industry began to unravel as China, who produce half of the world’s pork is set to drop by almost one-third because 200 million pigs are to be culled or die from being infected as African swine fever spreads through the country.
According to Rabobank, China’s pork production is seen at around 38 million tonnes in 2019 versus 54 million tonnes last year, Sherrard told Reuters, citing the company’s latest forecast.
That would be the lowest level in at least 20 years, according to the National Bureau of Statistics data, with repercussions across the global market for all animal proteins.
The decline would be nearly 30 per cent larger than annual output in the United States and equivalent to Europe’s yearly pork supply, Rabobank said.
The United States Department of Agriculture has forecast a smaller decline in China’s pork output this year, of around 10 per cent. 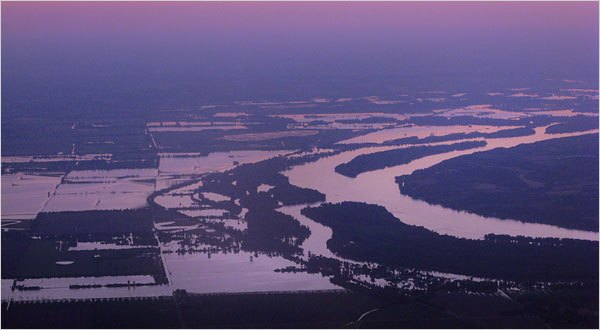 2019 is now officially the worst agricultural disaster in modern American history with catastrophic flooding.
The US is experiencing unprecedented and catastrophic flooding with NOAA issuing a warning the flooding will continue through to the end of June.
With more than 90% of the upper midwest and great planes still covered by nearly 11 inches of snow and all that snow is beginning to melt.
That means the US will transform from one of the worst winters in modern history into a flood season that has already taken an apocalyptic turn for farmers across the US.
Millions of acres of farmland are already under water meaning thousands of farmers will not be able to plant crops this summer, with thousands of more farmers who have been financially ruined by the floods and will never return to farming again.

Thousands of cattle were lost in the first three months of this year.

In the first 4 months of 2019, heatwaves in the southern hemisphere are killing wildlife ‘on a biblical scale’ from record-breaking heat.

Record heat in Australia, Chile, Argentina and Brazil with NASA and NOAA claiming the last 5 years have been the warmest since modern records began.
The intense heat in Uruguay that affected the country in 2019 did not affect only human beings, who persistently complained about the thermal sensations through social networks, chicken farmers, in particular, suffered the heat stroke in its economy when more than 100,000 chickens died by high temperatures in Montevideo,
Thousands of cattle died as temperatures hit 45 deg C, (110 deg F) early in 2019 in Argentina.
High temperatures, humidity and the suspicion of toxins in the food as a predisposing factor caused the death of thousands of cattle in at least four Santa Fe feedlots, Argentina at the beginning of  2019.

Iran’s farmers have had farms destroyed by unprecedented floods which have killed more than 70 people, destroyed or damaged 100,000 homes and damaged one-third of the country’s roads. thousands of cattle are thought to have been killed in the floods.

It has been described as a ‘disaster on a scale we have ever experienced’
The full scope of devastation across three African nations may not be known for months to come after the Cyclone Idai death toll approaches 1,000.
As well as the immediate threat caused by flooding, hunger and illness are growing concerns, with crops and wildlife destroyed and waterborne diseases likely to spread. (Click to Source)