Skip to content
By Strange Sounds – Apr 9, 2019
Only three weeks after a “bomb cyclone” — one of the most intense storms on record — pummeled the Plains and Midwest, another bombogenesis of similar strength has been forecast. This spring storm seems poised to dump even heavier snow; it could also be followed by another round of significant river flooding. Meteorologists say much of it is normal. But what is unusual is the second consecutive month for an inland bomb cyclone.

Areas that were paralyzed by blizzards and floods last month are getting ready for round two of a weather phenomenon known as a “bomb cyclone.”

Over the past few days, various forecast computer models have shown a blizzard of epic proportions for the north-central Plain States and Upper Midwest. Every time a model is updated, the storm depicted seems to get even more intense. At this point, it seems likely that some of the same areas impacted by devastating flooding just weeks ago are about to get slammed by an historic blizzard Wednesday through Friday.

As of Monday night, the storm system was located in the Pacific Northwest and is moving across the Rockies where it is expected to dump heavy snow into Tuesday to the mountains of Wyoming and Colorado.

The storm will intensify as it enters the central Great Plains on Wednesday. The barometric pressure — a measure of intensity in which lower means stronger — may drop to levels nearly as low as during the record-setting bomb cyclone in mid-March. In fact, this storm could tie or set April low pressure records. 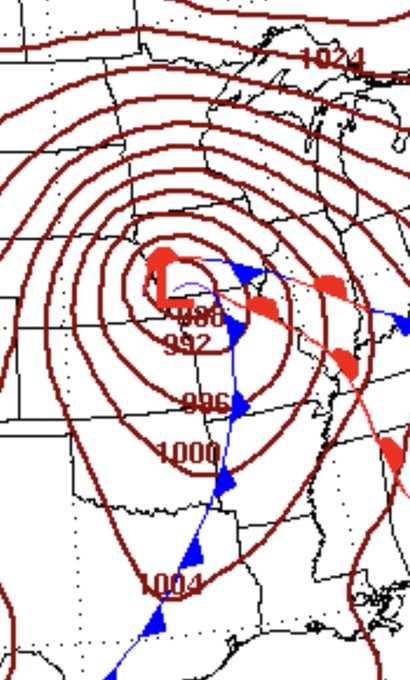 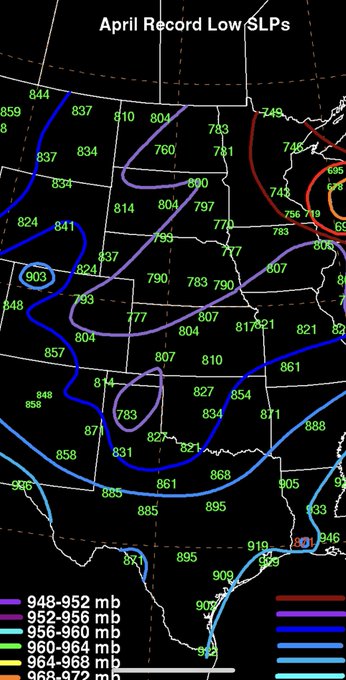 The WPC forecast for Thursday morning implies that April low pressure records are possible in the central Plains & Midwest.

As the storm strengthens, it will drag thick Gulf of Mexico moisture northward on a collision course with below freezing temperatures north of the system. It’s forecast to slow down at that point and perhaps even stall for 24 hours. That would mean a prolonged period of blinding heavy snow, wind gusts to 70 mph and near zero visibility in Nebraska, South Dakota, northern Iowa, Minnesota and Wisconsin from Wednesday through Friday.

The latest computer models put the bullseye for the heaviest snow band from Sioux Falls, South Dakota, through Minneapolis east to Eau Claire, Wisconsin. Snow totals could be staggering, with some models showing more than 30 inches in some areas. 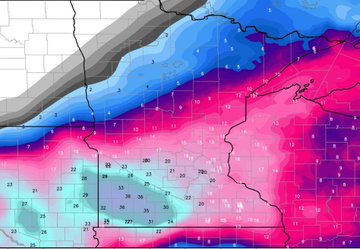 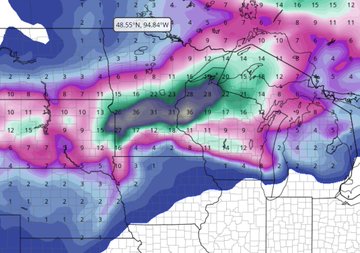 Models are amazingly similar in forecast snowfall – European, Canadian and FV3 (not pictured here) have bullseyes of 30-40 inches. While that seems unlikely because of heavy compacting of spring snow, numbers even close are “off the charts” for April or really any time of year !

While not out of the question, snowfall of more than 30 inches is less plausible at any time, but especially this late in the season. That’s because in milder spring air, snow tends to be heavier, wetter and more compacted. Still, a narrow band of two feet seems well within reach.

It wasn’t a coincidence that the two heaviest snows weren’t in the middle of winter. That’s because during mid-winter, the atmosphere is often too cold and dry in the Upper Midwest to support the most substantial snowfalls. In fact, 15 of the 20 biggest snow totals happened outside of the dead of winter. But in autumn and spring, the atmosphere is loaded with more moisture, lending more credibility to the possibility of the forecast spring blockbuster topping the charts.

Regardless of snowfall amounts, it seems certain that copious amounts of water will be squeezed out of the air – a liquid equivalent of two to four inches. Once the snow melts starting this weekend, the water would run off into already flooded rivers in the High Plains and Midwest.

Sunday night, dozens of gauges along the Mississippi, Big Sioux and James rivers were in major or moderate flood stage. Flooding has mostly receded along the Missouri River. 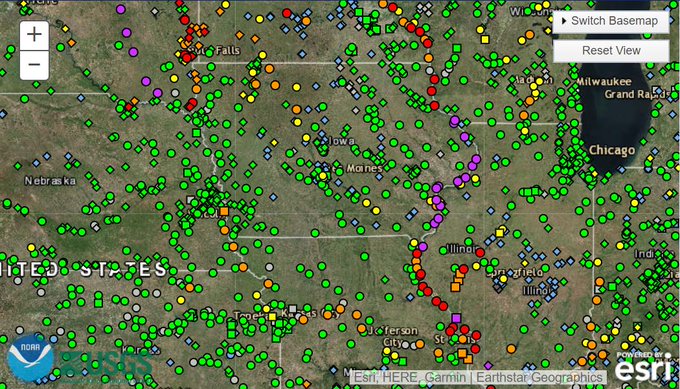 Across the nation 34 river gauges are in major flood stage, 55 in moderate and many of those are in the Midwest. With 2 feet of snow (water equivalent of 2 to 4 inches) possible mid to late week – and rapid spring melt starting late weekend – concerns for river more flooding.

Since Jan. 1, that part of the country has seen about twice its normal precipitation. With saturated ground, melting snow is likely to converge into area rivers. With that setup in mind, NOAA issued a rare, strongly worded Spring outlook calling for potentially historic flooding. Ed Clark, director of NOAA’s National Water Center in Tuscaloosa, Alabama explained, “This is shaping up to be a potentially unprecedented flood season, with more than 200 million people at risk for flooding in their communities.“

So, when the blizzard ends, attention will need to shift to melting snow and runoff. There’s no telling how significant the flooding will become but given the warning signs, it’s certainly something that needs to be monitored closely.

Welcome to springtime in the Rockies and parts of the Great Plains. That will be the second consecutive month for an inland bomb cyclone. And that’s very unusual.The March 13 bomb cyclone caused massive flooding and produced winds of between 96 and 110 mph. What about the next one in the coming days? (Click to Source)