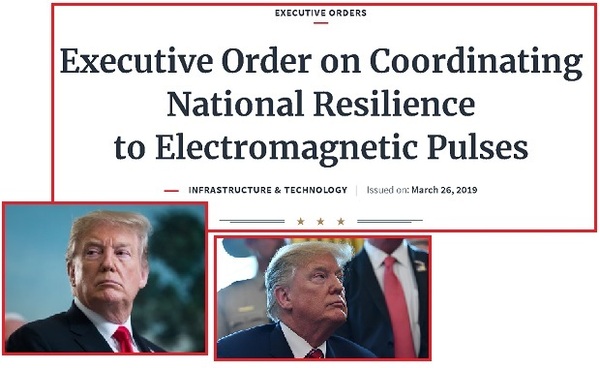 Finally, a presidential EMP order that may save American lives.

The Commission to Assess the Threat from Electromagnetic Pulse (EMP) Attack, also known as the Congressional EMP Commission, has warned for nearly 20 years that a nuclear EMP attack, or natural EMP from a solar superstorm, could destroy our electronic civilization and kill millions.

“During the Cold War, the U.S. was primarily concerned about an EMP attack generated by a high-altitude nuclear weapon as a tactic by which the Soviet Union could suppress the U.S. national command authority and the ability to respond to a nuclear attack — and thus negate the deterrence value of assured nuclear retaliation,” the Commission wrote in July 2017 in its report, “Assessing the Threat from EMP Attack.”

It continued: “Within the last decade, newly-armed adversaries, including North Korea, have been developing the ability and threatening to carry out an EMP attack against the United States. Such an attack would give countries that have only a small number of nuclear weapons the ability to cause widespread, long-lasting damage to critical national infrastructures, to the United States itself as a viable country, and to the survival of a majority of its population.”

The Executive Order on Coordinating National Resilience to Electromagnetic Threats, signed on March 26 by President Trump, is an excellent first step toward achieving national preparedness. It seeks to implement core recommendations of the Congressional EMP Commission on an accelerated basis.

Among the best and strongest features of the EMP Executive Order is putting the White House in charge of national EMP preparedness, rather than relying on the Department of Energy (DOE) or the Department of Homeland Security (DHS) to lead.

The order states that the Assistant to the President for National Security Affairs (APNSA), working with the National Security Council and the director of the Office of Science and Technology Policy, “shall coordinate the development and implementation of executive branch actions to assess, prioritize, and manage the risks of EMPs.”

White House leadership on EMP preparedness is imperative. Both Energy and Homeland Security have a long history of underestimating and under-prioritizing the EMP threat.

Among its many strong features, President Trump’s executive order combines EMP and cybersecurity. It directs DHS’s secretary to coordinate with the Energy and Defense secretaries, other agencies and the private sector to “develop a plan to mitigate the effects of EMPs on the vulnerable priority-critical infrastructures.”

The president’s order recognizes that an EMP attack, in adversary military doctrine and planning, is a dimension of cyber warfare. Worst-case cyber-attack scenarios that could kill millions of Americans — by, for example, causing a protracted blackout of electric grids through cyber-induced over-voltages, or by manipulating controls to destroy transformers — can be addressed by many of the protective measures long recommended by the Congressional EMP Commission.

One of the most welcome and needed features of the EMP Executive Order is the requirement that the vulnerability of vital critical-infrastructure equipment be established through empirical testing in EMP simulators.

DOE, the national labs, and their partners in the electric power industry, such as the Electric Power Research Institute have long — and incorrectly, in my opinion — insisted that the national electric grid would be little damaged and quickly recover from any natural or nuclear EMP. Yet, these studies rely on computer models that are no more trustworthy than “independent laboratory assessments” by the cigarette industry that once suggested no causal linkage between smoking and lung cancer. In effect, they have done nothing to improve or safeguard national security.

There is no substitute for EMP testing of equipment, which was last done comprehensively by the Congressional EMP Commission.

The EMP Executive Order is a bipartisan victory. Visionary Republicans and Democrats, in Congress and among the states, have provided leadership toward national EMP preparedness — often laboring alone, without help from previous White House administrations since 1995.

Aside from President Trump himself, the greatest credit for the EMP Executive Order goes to William R. Graham, chairman of the Congressional EMP Commission since 2001 and former White House science adviser to President Reagan, who ran NASA and was on the defense science team that discovered the EMP phenomenon during the Starfish Prime nuclear test in 1962. Dr. Graham has spent a professional lifetime trying to protect civilization from the existential threat that is EMP.

No executive order, no matter how well crafted, can succeed unless the White House is willing to bulldoze through inevitable opposition from recalcitrant lobbyists and bureaucrats. The EMP executive order is not the end of the long struggle to achieve national EMP preparedness — but it is, perhaps, the beginning of the end, as well as a long overdue step to save Americans’ lives.  (Click to Source)

This story was originally published here. Dr. Peter Vincent Pry was chief of staff of the Congressional EMP Commission. He served on the staff of the House Armed Services Committee and at the CIA. He is the author of “EMP Manhattan Project: Organizing For Survival Against An Electromagnetic Pulse Catastrophe.”