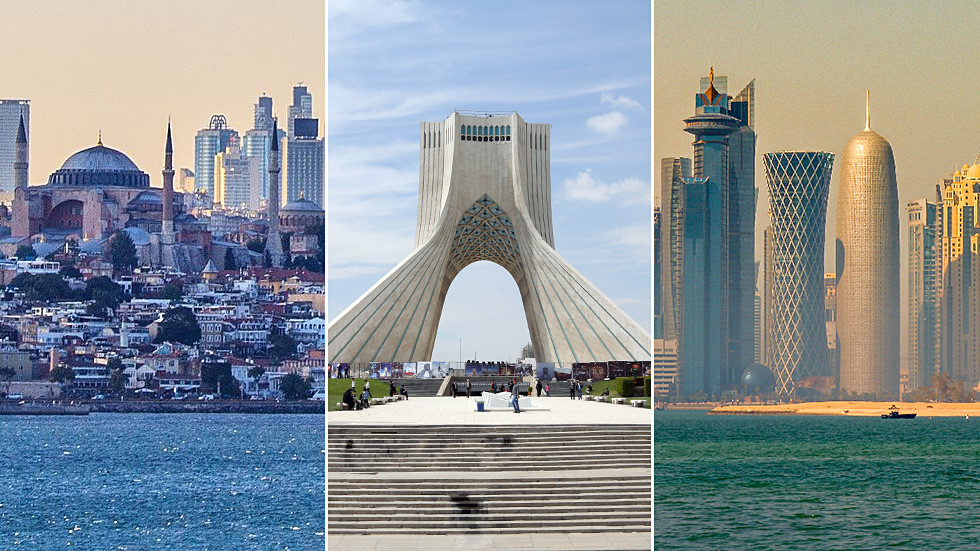 A new alliance being formed by Qatar, Turkey, and Iran, with the potential to receive the backing of Russia and China, is a major concern to the US, Israel, and Saudi Arabia.

The aftermath of over eight years of war in Syria has changed the regional dynamics in a way almost certainly never envisioned by the United States and its allies. Through leaked documents, we have known for some time now that Washington’s interim goal was to, at the very least, destabilise the Assad government in the hopes of scaling back Iranian influence. (Its ultimate goal was quite clearly regime change, which was very close to fruition during at least one stage of the war).

This anti-Assad strategy has, of course, backfired to the point where Iranian-backed forces have essentially amassed along the Syria-Israel border, threatening Washington’s most beloved ally in the region. The other notable – and realistically, most important – development is that Russia, not the United States, emerged out of the rubble of Syria as the major power-broker and military tactician.

However, it seems as though the aftermath of Syria is just the beginning of a tectonic move in a massive direction away from the status quo. Eight years on since the war in Syria broke out, and we are now beginning to see some other major concrete shifts within the regional alliances which has Washington’s traditional allies, particularly Saudi Arabia, starting to tremble.

As of now, Qatar, Iran, and Turkey are forming a regional alliance, which is irking Saudi Arabia and the other Gulf States – and they only have themselves to blame. After Saudi Arabia led a coalition of nations that attempted to bully Qatar into submission and accept a long list of inconceivable demands in June 2017, Qatar soon found it could rely on some key partners to weather the Saudi-led storm. These partners are now openly forming a new alliance, which will upend the entire balance of power in the Middle East.

The strengthening of ties between this axis of nations is quite remarkable, when one considers that they each held completely paradoxical positions regarding the Syrian conflict. The horror of this shift from a Western perspective can be seen brilliantly in an Asia Times article entitled ‘America’s Syrian humiliation is worse than it looks’.

When Saudi Arabia blocked Qatar’s only land border and the UAE in turn blocked shipments from its ports to Doha, Qatar quickly found friends in Oman, Turkey, and Iran to bypass this nonsensical blockade. Qatari flights were rerouted over Iranian airspace and Turkey upped the ante on its military presence in the country as a sign of strength and commitment. Eventually, daily life in Qatar could continue quite reasonably. This is not to say that Qatar didn’t experience difficulties, particularly regarding oil prices, real estate prices, tourism, and the slowdown in economic growth. Then again, Qatar was able to draw from its reserves to counter the effects, minimising the damage done by its neighbours.

By the end of 2017, Turkey, Iran, and Pakistan had all increased bilateral trade with Qatar, benefitting all four countries. In the less than six months since the ‘Qatar crisis’ had begun, trade between Iran and Qatar reportedly increased by 117 percent. At the time, experts studying the crisis predicted that commercial relations between the two countries would remain intact, even following the closure of the Saudi-led Qatar crisis.

Iran, Qatar, and Turkey also signed a land transportation pact in August of that year which would help reduce the cost and transit period for the exchange of goods. Seeing as Saudi Arabia effectively blockaded the flow of goods into Qatar, it should not be hard to see that even this agreement alone bore major significance.

Qatar for its part has invested heavily in Turkey, well over $20 billion in total. As explained previously by Al-Jazeera, this is the second-highest in terms of value by any country, demonstrating the importance these two nations have given to each other.

By most accounts, the Gulf States need Turkey on their side in order to contain Iran. A recent report published by Middle East Eye revealed how Saudi Arabia, the UAE, and Egypt hatched a plan with Israel to scale back the regional influence of Turkey and Iran, with Turkey deemed to be the biggest military threat to these Gulf states’ interests.

As it transpires, the Qatar-Turkey-Iran axis could potentially provide a major buffer to the so-called Arab NATO, which will be headed by Saudi Arabia. While Saudi Arabia appears to have managed to bring Pakistan on side, it still remains that Pakistan shares a border with Iran and relies heavily on China, another key ally of Iran. Islamabad’s anti-Iran stance can therefore only stretch so far.

The fact is that this alliance on the face of it will likely bear the support of Russia and its military will also be of a major concern to the anti-Iran alliance. As it stands, Russia, Iran, and Qatar provide over half of the world’s known gas reserves. Not to mention that Iran and Qatar share the world’s largest gas field, another major concern for the Saudi-led bloc.

Saudi-owned media has already voiced its opposition to this newfound alliance, which can be seen most openly in an article in Al Arabiya entitled ‘How Iran, Turkey use Qatar to undermine regional security and US interest’. According to Al Arabiya, there is a “risk” of Qatar “breaking away from the Arab orbit and posing a serious threat to Saudi Arabia, the United Arab Emirates and Bahrain.” The Qatar-Iran entente, “previously concealed, is out in the open,” the article also notes.

“To put it simply: Qatar has irrevocably joined with Ankara and Tehran against its former Arab allies,” the article’s sources surmise. “It has conclusively positioned itself in a regional alliance that pursues geopolitical dominance by driving instability.”

Qatar is “playing with fire” the article states. At around the same time, Qatar had called for a new alliance to replace the Gulf Cooperation Council (GCC), further demonstrating this shift in perspective.

According to Russian think tank Katehon, the new Qatar-Iran-Turkey axis is already well underway and has the power to control Asia, west India and Pakistan and challenge the “demonic trio” of the US, Israel, and Saudi Arabia.

“Do not underestimate the role of small Qatar in this triple alliance with latent empires,” the think tank is cited as saying. “The fact is that the huge financial resources, as well as the successful geographical location of the emirate, allow it to resist even the all-powerful Saudi Arabia, which also claims regional domination.”

“Thus, international pressure and economic restrictions prompted three completely different states, despite geopolitical differences, to begin rapprochement in the economic sphere. How this will turn out in the future depends primarily on the actions of the United States, which, undoubtedly, will try to break up the emerging triple alliance.” (Click to Source)