Bob Thissen from Heerlen, The Netherlands, had to hike through bushes and streets, avoiding Japanese police patrols to reach the eerie games arcade – located deep inside off-limits sections.

In contrast to a traditional SEGA Hall, spewing with loud sounds and colourful lights to entice gamers, Fukushima’s lie silent and sombre yet surprisingly intact. 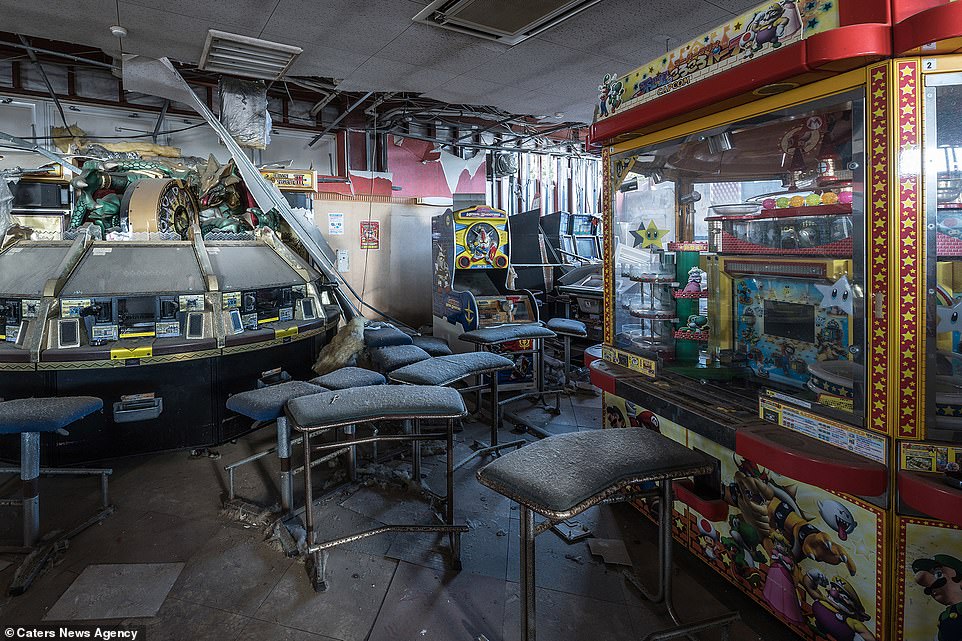 The once vibrant and enchanting SEGA games hall now lies abandoned and with a distinct chill of abandon. Mr Thissen had to hike through bushes to avoid police patrols before he could enter the games hall. The Japanese government has put exclusion zones around the area to protect people from potential radiation 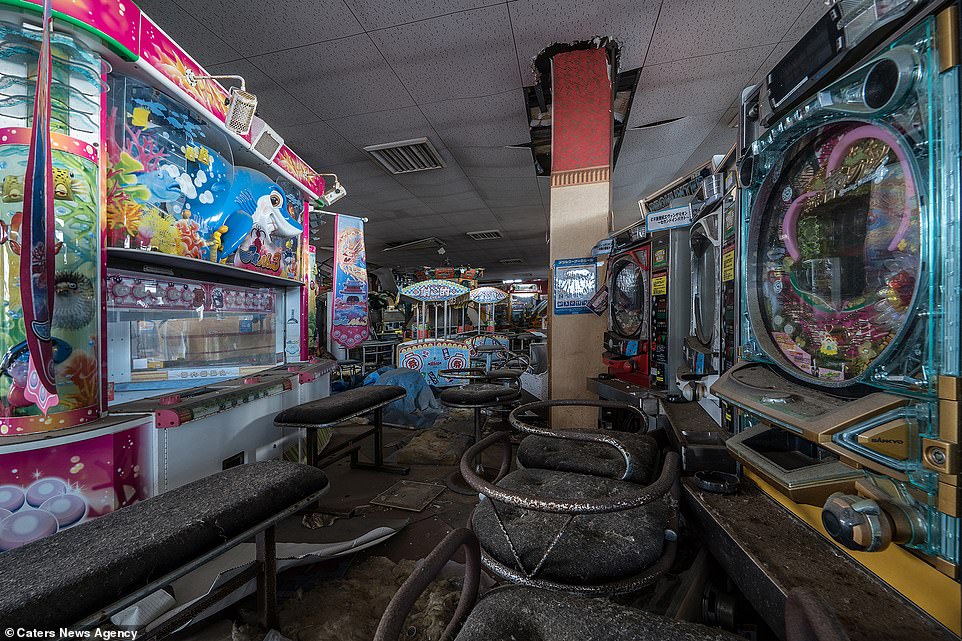 Untouched: The site looks as though it has been undisturbed since the nuclear disaster in 2011 apart from the odd looted vending or cash machine. Mr Thissen noted how eerie it was that a once vibrant arcade hall was now deserted. He said: ‘It was strange to find a normally vibrant place totally silent and sombre, no lights, visuals or sound’

Apart from looted vending and cash machines, the spot still had stacks of tokens, winnable cuddly toys and games galore – all surfaces covered in a thin layer of radioactive dust.

Mr Thissen believes the site appears to have remained untouched since the Fukushima nuclear disaster – which saw more than 160,000 people flee, leaving homes, belongings and their old lives behind.

He said: ‘The noise inside a SEGA hall is overwhelming, different loud sounds come from each arcade and they also contain a lot of visuals and flashing lights to attract people. Players are totally absorbed in the games.

‘So it was strange to find a normally vibrant place totally silent and sombre, no lights, visuals or sound.

‘While I was walking around, I suddenly heard stuffed animals say “I love you”.’ 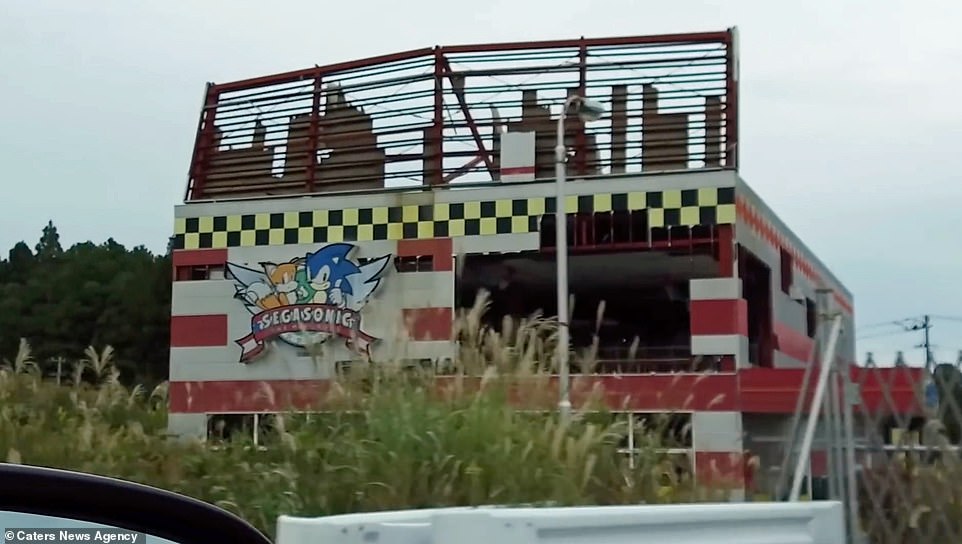 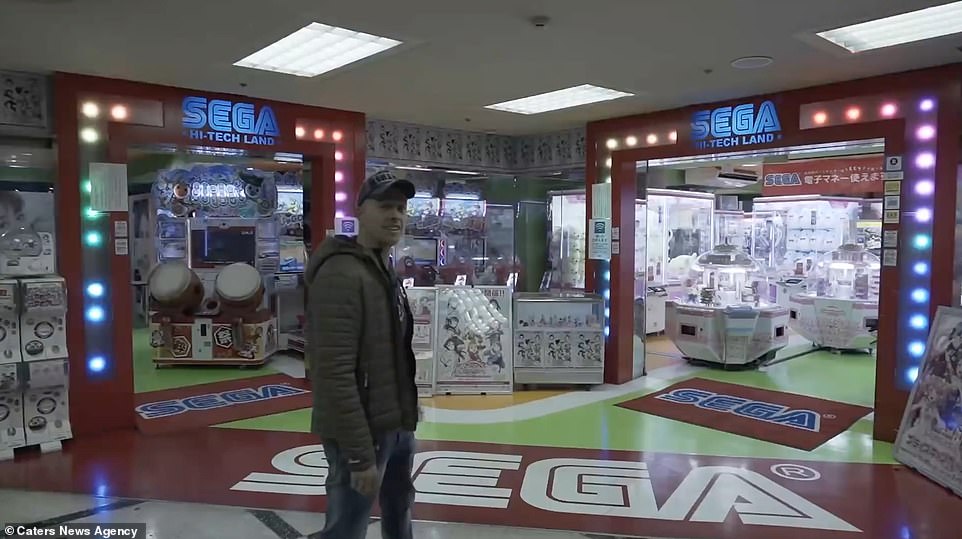 Mr Thissen believes that without the radioactive dust covering the entire place, looters would have stolen the arcade games themselves and sold them on for more money. Pictured is a SEGA games hall that, by comparison, has not closed down 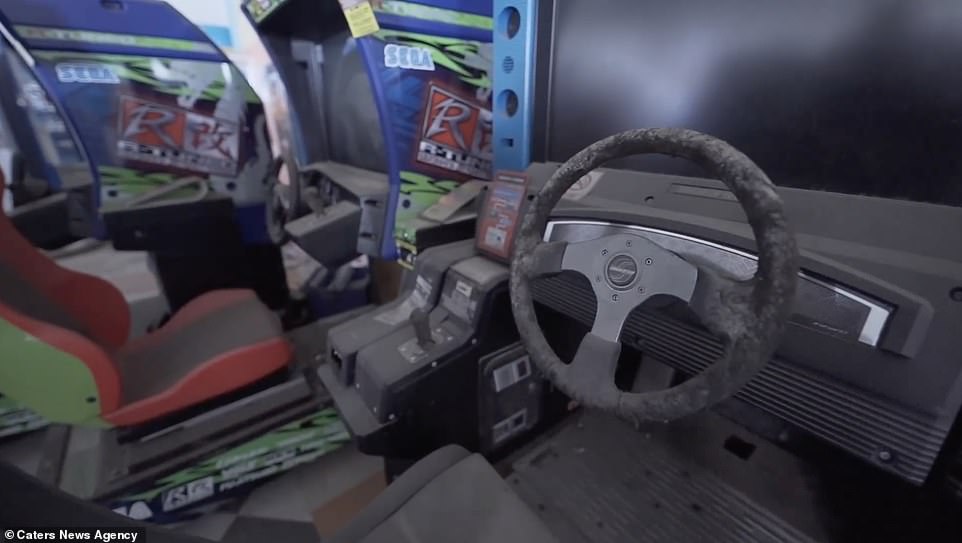 A thin layer of radioactive dust covers all of the old games and has served to deter any potential looters from disturbing the pristine site. Mr Thissen said: ‘People fled during the Fukushima disaster and it appears to be in almost the exact same state as it was left’

‘It was crazy to see the batteries still worked. I also saw a lot of Disney figures which you could win.

‘We barely touched anything, because there is radioactive dust.

‘It’s a unique location, because you normally don’t get to see a SEGA or arcade hall which is fully intact.

‘I only noticed vending and cash machines were pried open by looters.

‘Normally they would take out the prices and sell the arcades. But because of the nuclear disaster everything is left behind.

‘People fled during the Fukushima disaster and it appears to be in almost the exact same state as it was left. 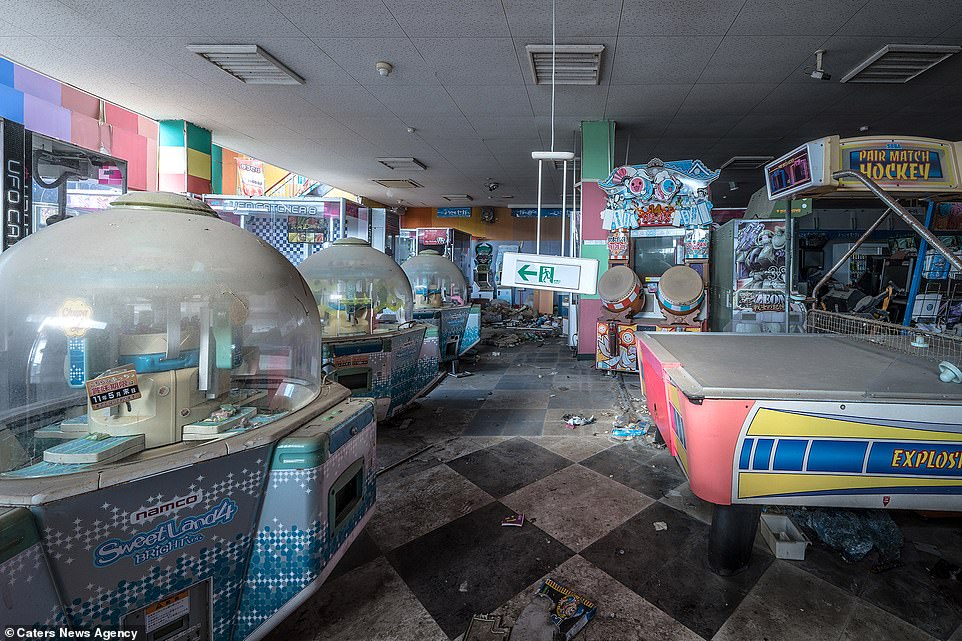 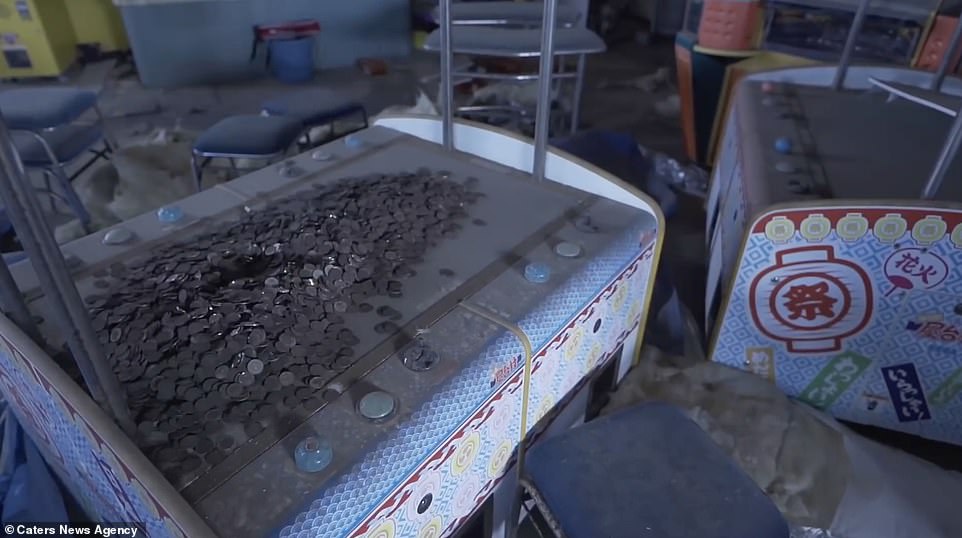 Following the disaster the government put up exclusion zones to try and minimise radiation contamination as much as possible. Mr Thissen says that government clean up projects usually happen fairly quickly so this preserved arcade hall wont stay like this for much longer

‘Soon the whole area will be history. The clean-up and rehabilitation happens really quick and former red zones are coming back to life.

‘That’s why I think it’s important to show the real aftermath of the disaster before all traces are gone.’

A magnitude nine earthquake – the strongest ever experienced in Japan – hit the region in March 2011, and a subsequent tsunami destabilised the nuclear power plant that would forever change Fukushima.

The spot has remained near-lifeless and hidden from the outside world behind government exclusion zones – put in place for fear of radiation contamination.

Some of the games included Sonic the Hedgehog, Donkey Kong, House of the Dead, and many more, including toys of Disney characters, talking bears and more.

Mr Thissen who visited the site for his YouTube channel, Exploring the Unbeaten Path, wasn’t surprised by the extremely-pristine condition of the games hall. 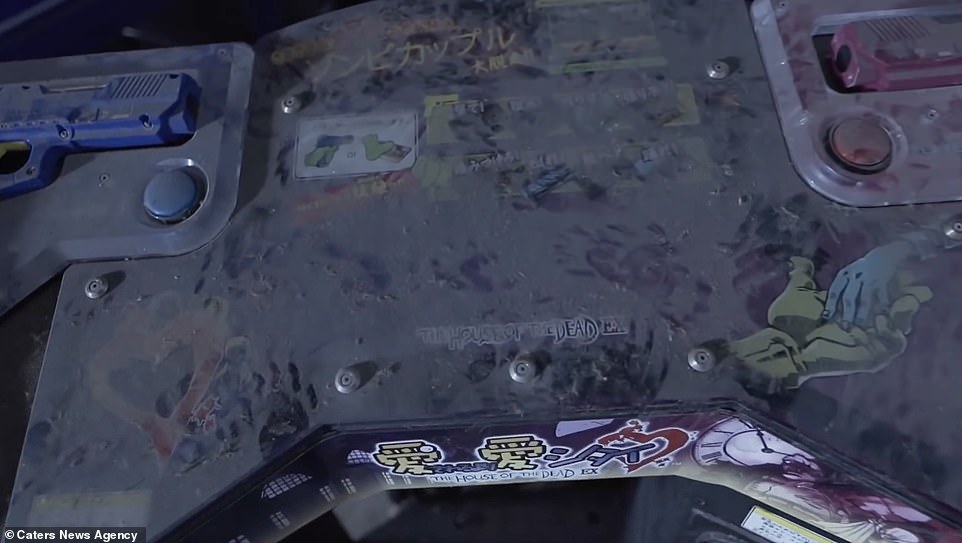 Some of the games included in the abandoned site are Sonic the Hedgehog, Donkey Kong and House of the Dead (pictured). Mr Thissen had tried to get into the abandoned arcade hall in 2017 but because there was a lot of renovations and radioactive clean-up he was unable to get in 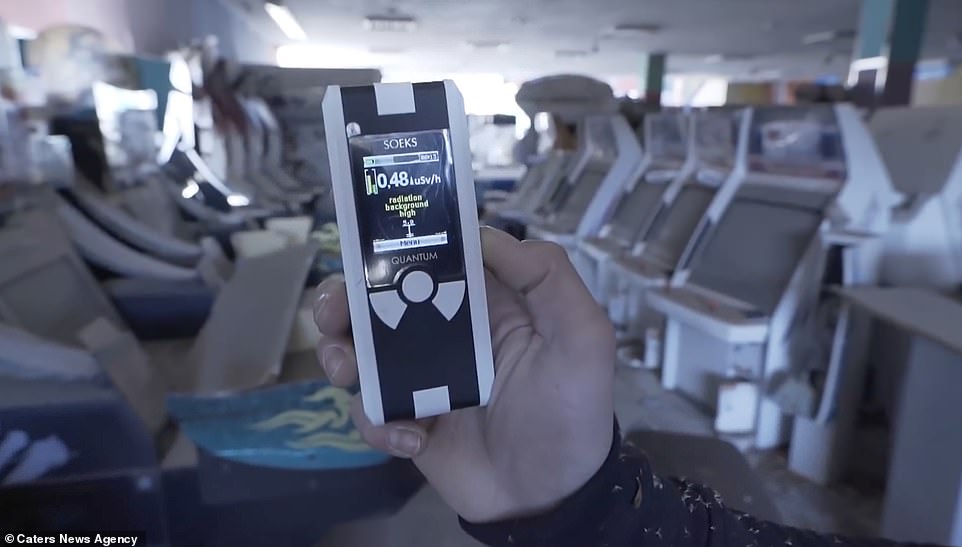 Having visited multiple spots within Fukushima, he believes the people of Japan respect the boundaries put in place, which has helped to preserve it as a near eight-year-old time piece.

Mr Thissen said said: ‘I wasn’t surprised, because almost everything is left untouched in the forbidden zone.

‘Everywhere else in the world these buildings would be totally looted after a few weeks.

‘The Japanese people really respect the rules and never trespass, even if doors are wide open.

He initially spotted the locations during his trip in 2017, but was unable to reach it.

Now having gone back to document the dying remains of Fukushima, he hopes others will respect and appreciate the hall too.

Mr Thissen added: ‘We drove by this location in 2017 on route six – at that time the only open road which goes through the red zone – and I really wanted to see it.

‘But because there was a lot of activity in the red zone – demolition, renovation, radioactive clean-up – we didn’t manage to get there.

‘We went back to document more of the forbidden zone of Fukushima, like this SEGA hall.’ (Click to Source)