At least eight deaths have been reported in the U.S. as the deadly polar vortex with frigid Arctic temperatures slammed the Midwest and headed east on Wednesday.

The polar vortex has caused temperatures to drop much farther south than usual, with temperatures in certain areas of the Midwest comparable or below those in Antarctica, where the Amundsen-Scott South Pole Station hit minus 25 degrees.

The city of Chicago — where it reached a record-breaking minus 22 degrees around 6 a.m. Wednesday — saw temperatures still dropping after the National Weather Service (NWS) recorded a low of minus 19 degrees. With strong winds, wind chill temperatures reached a range of minus 45 to minus 55 degrees.

Cities like Ponsford, Minnesota, and Fargo, North Dakota, saw wind chill temperatures of minus 66 degrees and minus 31 degrees, respectively.

“A record arctic air mass will remain over the central and eastern U.S. over the next several days,” the NWS warned Tuesday. “Wind chill values of 30 to 60 degrees below zero will be common across the northern Plains, Great Lakes, and upper Midwest.”

While the cold snap is causing travel disruptions throughout the region, the Midwest isn’t the only area of the U.S. experiencing dangerous winter conditions.

In Wyomissing, Pennsylvania, a reported 27 vehicles were involved in a crash on Wednesday as the area experienced snowy conditions. While a warmer 16 degrees, a long stretch of Route 222 in Berks County saw the pileup around 1:30 p.m. Authorities reportedly requested at least 15 ambulances as multiple people were reported injured. 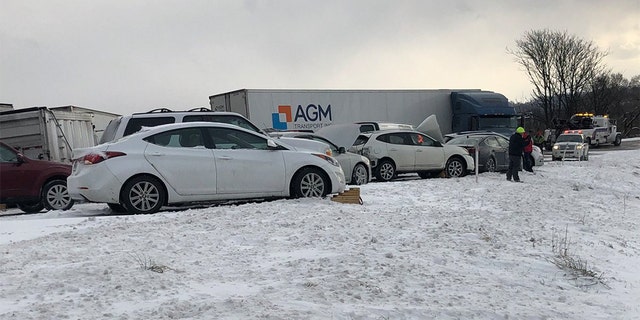 Dozens of vehicles were involved in a crash on Route 222 in Wyomissing, Pennsylvania, Wednesday afternoon. (WFMZ)

“The Midwest and Great Lakes are well into this Arctic blast, with dangerously low wind chills widespread across the region this morning,” Dean said. “Air temperatures are well below zero, in the minus 10s to minus 30s for many. Wind chills of minus 20 to minus 70 will continue through early Thursday flirting with all-time record lows ever recorded.”

You really can’t be outside for longer than minutes because your face will freeze in these type of temperatures,” she added.

Of the eight deaths linked to the weather system, one was an elderly Illinois man who was found several hours after he fell trying to get into his home and a University of Iowa student found behind an academic hall several hours before dawn.

Other deaths included a man struck and killed by a snow plow in the Chicago area, a young couple whose SUV struck another on a snowy road in northern Indiana, and a Milwaukee man found frozen to death in a garage.

Governors in Illinois, Wisconsin and Michigan declared emergencies as the worst of the cold moved in on Wednesday. In Chicago, major attractions closed because of the bitter cold, including the Lincoln Park Zoo, the Art Institute and the Field Museum. (Click to Source)

Fox News’ Travis Fedschun and The Associated Press contributed to this report.