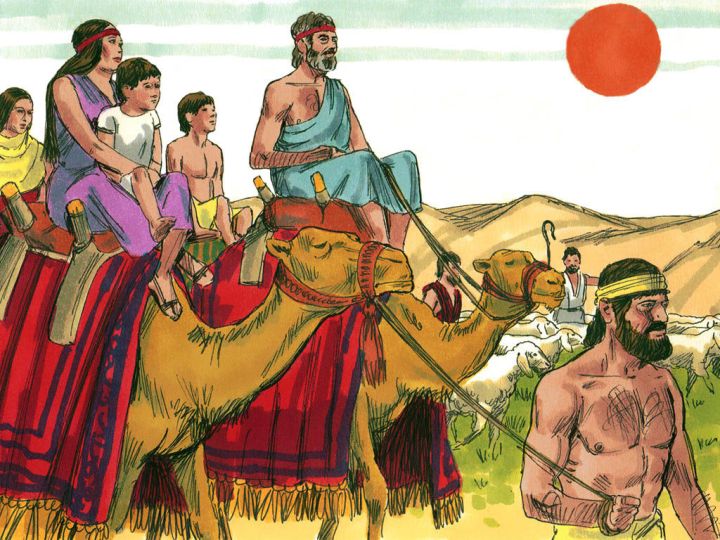 Just In Case It Does Not Work Out
The life of Ya’akov carried with it some crazy twists and turns and was certainly not dull. I wonder if Yah had revealed to Ya’akov the drama filled encounters he would experience in his life, whether Ya’akov would have pressed forward to receive his blessings. If Ya’akov would have known what was ahead for him in Lavan’s home, would he have just stayed put in Beit-El. I wonder if He had shown us our lives…that’s another thought to ponder.
Ya’akov’s life changed much in the twenty years since his amazing encounter with Yahweh in Beit-El. He only asked for bread and clothes. Ya’akov returns with two wives, two concubines, eleven sons (one on the way), at least one daughter and quite the entourage of livestock, servants and their belongings with him. Not at all lost in the crowd is his “Beloved Wife” Rachel. Not known to Ya’akov, she is toting along her father’s household gods she had stolen from him. She did what?!
Let’s look back over the last twenty years of the life of Rachel. She arose one morning to take her flock of sheep to graze and water, her daily chore. On this particular day a gentleman appeared, Ya’akov, who fell head over heels in love with her. He went through twenty years of trials and service with her father, each day proving his devotion to her. We would think Ya’akov’s hard work and dedication, as well as Yah’s favor for increase, would give Rachel a sense of stability and strength. Yet Rachel, upon leaving her father’s house, decided she needed to take some of her father’s false gods with her. Was this her “back-up plan” just in case things didn’t work out the way Ya’akov said or that maybe Yahweh isn’t who He says He is.
Where do we see Messiah in this picture of Rachel with the false gods? We see Messiah as our True and Living God who clearly calls us to leave all behind (false gods, doctrines, attitudes, pride, etc) to follow Him. It is just not any more complicated than that.
Many of you reading this commentary are those who have “come out” or are presently coming out of systems of religion in one form or another. Father has opened our eyes, over a period of time, to the thought that we were serving something that looked more like Lavan-(white) washed tombs that did not have the life inside we were searching for. With that revelation, we made the break for Truth and set out on a journey back to what we now understand as our heritage and home. An important question to ask ourselves is “whether we may have brought a few things from our past with us?”. Could there be some things lurking under our camel saddles that we are not even aware of?
Go back to last week’s Torah portion and read again the account of Lavan’s pursuit of Ya’akov. When Lavan demanded the false gods, Ya’akov allowed Lavan to search the tents. In this week’s portion, when Yah tells Ya’akov to go back to Beit-El, it is Ya’akov who tells the people traveling with him to put away their false gods. I have to ask why they were allowed in the first place, but that is a message for another time! Neither time, when the subject of false gods comes up does Ya’akov choose to search them out for himself. Instead, he allows or instructs someone else do the job for him. This thought brings forth two options in my mind. Either the false gods were just not a big deal to Ya’akov, or he knew Rachel had them and allowed his physical love for her to cloud his judgment and not confront her. Whether those thoughts are correct, in the end, Ya’akov’s decision to not search his family would cost them both dearly in the loss of her life.
Here are a few questions to meditate on. What are we allowing into our lives and in the lives of our families through television, movies, social media, and video games? Are we spending the time and energy to search these things out for ourselves or just waiting for someone else to do it for us? Are we pointing out sticks in someone else’s eye before removing hidden logs from our own eyes? Do we have “back up plans” in case the Torah life style is a bust or if this Yeshua guy isn’t all that He’s been made out to be? Are we willing to take a stand, no matter the consequences, even at the cost of close relationships, to rid our tents of false gods?
Allow me to close with this thought. Just what is a false god anyway? Do any of us have little fat man statues hiding under our beds that we get out to rub their tummies for good luck before going to sleep? Probably not, but, what about attitudes, doctrines, traditions, pride of being right? What are we carrying that in the end will not bring forth life, but rather death?
Where is Messiah? He is the one who never carried or trusted in anything or anyone outside His Father. He is the One who can and will help us to search out those things that we need to leave behind. His help only comes with our desire though. May we desire the Holy One of Israel above all! Let us purpose to purge the “little fat men” from our camel saddles today! May His Light shine into the dark crevices of our hearts to reveal anything that would hinder us from going deeper into our relationship with Him!
(Click to Source)