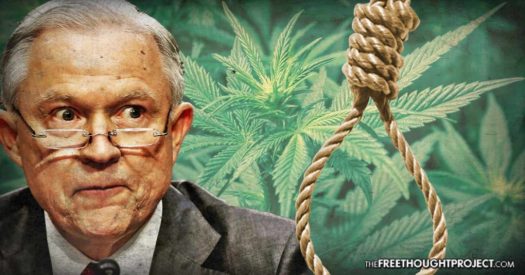 To make America great again, Donald Trump announced last month that he will be moving forward with his plan to execute people for selling drugs. Without any critical thought or scientific approach, the president completely ignored all the data and instead opted for the police state as a solution to the opioid epidemic currently ravaging the nation.

As his supporters cheered on the wholesale State-sanctioned slaughter of people for conducting voluntary interactions, their applause were also unwittingly supporting the murder of legal marijuana growers.

Last week, after the president’s most tyrannical speech, U.S. Attorney General Jeff Sessions sent a memo to the nation’s federal prosecutors urging them to seek the death penalty in cases involving large-scale drug traffickers. The memo highlights a little-known federal law that allows the US government to execute anyone who grows more than 60,000 marijuana plants.

As the Denver Post points out, Sessions’ memo talks largely about opioids, but federal law contains no such drug-specific limitation on prosecutors’ power. Trace the law’s meandering route through federal statutes and you’ll come to this conclusion: Anyone convicted of cultivating more than 60,000 marijuana plants or possessing more than 60,000 kilograms of a substance that contains marijuana could face death as a punishment.

While it is entirely unlikely that the US government would start executing legal marijuana growers, the fact remains — it is one of their options.

“I think it’s still very theoretical,” said Sam Kamin, a University of Denver law professor who specializes in marijuana law and in the death penalty, according to the Post. “I don’t think anyone thinks the federal government is going to seek the death penalty against a state-licensed business. But what it highlights is this enormous disconnect with federal and state law.”

Although most marijuana growers are secretive about how many plants they cultivate at a time, Sam Kamin was asked how many he estimates to pass the benchmark of 60,000. “There are many,” he responded.

The Free Thought Project also spoke with a marijuana grower who owns operations in California, Nevada, and Colorado. Speaking on the condition of anonymity — for likely reasons — our source tells us that he grows twice that amount.

According to the Post, in June, the last month for which this data is available, there were nearly 1 million marijuana plants under cultivation by Colorado’s state-licensed cannabis businesses. In California, one of the biggest dispensaries is building out a farm it expects will grow 100,000 plants at a time. And Smith said laws in states that have more recently adopted legal marijuana but limit the number of sales licenses available have probably increased the number of super-sized pot grows in the country.

The idea that the US government claims the right to murder you for growing an arbitrary number of plants — which research shows can potentially solve the current opioid epidemic — speaks to the dangerous idiocy and tyranny within the state.

Although Sessions marching innocent pot farmers down death row is unlikely, the fact remains that it is one of their options.

“What Sessions is reminding us,” Kamin said, “is that losing your life is at least statutorily possible.” (Click to Source)

Matt Agorist is an honorably discharged veteran of the USMC and former intelligence operator directly tasked by the NSA. This prior experience gives him unique insight into the world of government corruption and the American police state. Agorist has been an independent journalist for over a decade and has been featured on mainstream networks around the world. Agorist is also the Editor at Large at the Free Thought Project, where this article first appeared. Follow @MattAgorist on Twitter, Steemit, and now on Facebook.