A new intercontinental ballistic missile hailed by Russian President Vladimir Putin as being able to fly over the North or South Poles and strike any target in the world reportedly was test-launched for the second time Friday.

Russia’s defense ministry released a video purportedly showing the Sarmat ICBM blasting off in spectacular fashion from the Plesetsk Cosmodrome in its northern Arkhangelsk province, the move coming just hours after the Kremlin announced it would expel 60 American diplomats and close the U.S. consulate in St. Petersburg in retaliation for U.S. measures taken in response to the poisoning of an ex-Russian spy and his daughter in Britain.

The video shows the missile – dubbed “Satan 2” by NATO — rising out of the ground and seemingly floating in the air for a brief moment before more flames erupt, kicking up massive clouds of smoke and snow. 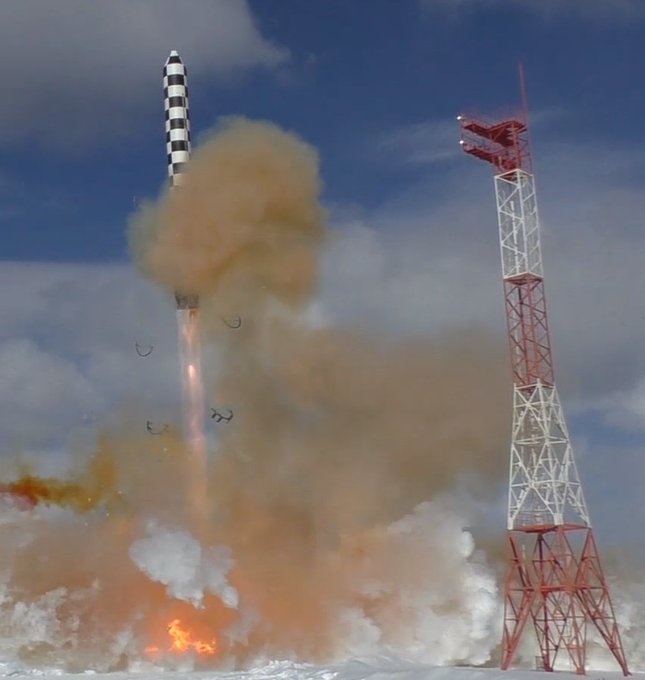 “No defense systems will be able to withstand it,” Putin said about the missile during his state-of-the-nation speech in early March.

The test-launch also comes after Putin’s recent re-election and a congratulatory phone call from President Trump — in which Trump reportedly also warned his Russian counterpart, “if you want to have an arms race we can do that, but I’ll win,” according to two officials that spoke to NBC News. Days before the launch, the U.S. Navy test-fired its own ICBM from a ballistic missile submarine off the coast of Southern California.

Russia has been working for years to develop a new ICBM to replace the Soviet-designed Voyevoda, the world’s heaviest ICBM and known as “Satan” in the West. That ICBM carries 10 nuclear warheads, the Associated Press reported. Putin announced during his March speech the Sarmat missile was undergoing tests and debuted a video purportedly showing its first test launch, which he said happened in December.

Putin said Sarmat weighs 220 tons and has a higher range than “Satan,” allowing it to fly over both poles of the Earth. He also said it accelerates faster than its predecessor, making it harder for an enemy to intercept it in its most vulnerable phase after the launch. Putin added Sarmat also carries more — and more powerful — nuclear warheads than the “Satan” ICBM. 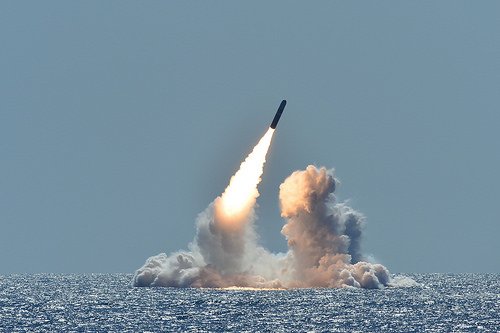 Johnny Michael, a Pentagon spokesman, said Friday, “We did not receive any advance notice of this missile-related testing activity. I would defer you to the Russian Ministry of Defense to explain where an ejection test falls in the very early stages of the development of an ICBM missile program, and how far the item in question actually traveled.”

Russian state-run news agency TASS has reported the Sarmat missile will go into mass production in 2020 and is expected to become operational the year after, according to EuroNews.

“No one has listened to us. You listen to us now,” Putin boasted during the March speech, when he revealed other weapons his country apparently has in the works, such as an underwater drone armed with a nuclear warhead powerful enough to sweep away coastal facilities and aircraft carriers, and a nuclear-powered cruise missile that’s “invulnerable to any existing or prospective air and missile defense systems.”

The White House responded to Putin’s March 1 speech by saying he merely confirmed what the U.S. already knows: that Russia has been developing “destabilizing weapons systems for over a decade in direct violations of its treaty obligations.”

White House Press Secretary Sarah Huckabee Sanders said President Trump understands the threats and that America is “moving forward to modernize our nuclear arsenal and ensure our capabilities are unmatched.”

“You will have to assess that new reality and become convinced that what I said today isn’t a bluff,” Putin had said. “It’s not a bluff, trust me.”

He said the creation of the new weapons has made NATO’s U.S.-led missile defense “useless,” putting an end to what he described as years of Western efforts to sidetrack and weaken Russia.

“I want to tell all those who have fueled the arms race over the last 15 years, sought to win unilateral advantages over Russia, introduced unlawful restrictions and sanctions aimed to contain our country’s development: All what you wanted to impede with your policies has now happened,” he said. “You have failed to contain Russia.”

Another new weapon Putin unveiled during the state-of-the-nation speech, called Avangard, is an intercontinental hypersonic missile that would fly at 20 times the speed of sound and strike its targets “like a meteorite, like a fireball.” (Click to Source)

The Associated Press contributed to this report.