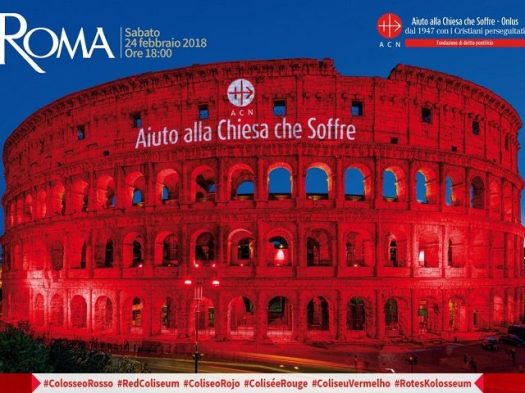 How about lighting up the Vatican in red, to draw attention to the fact that Pope Francis keeps encouraging non-Muslim countries to take in even more Muslim invaders whose religion advocates the killing or enslavement of Christians who refuse to convert to Islam?

he Roman Colosseum along with two churches in Mosul and Aleppo will be lit up by red lights later this month to draw attention to the global persecution of Christians.
“Christians are the victims of at least 75 percent of all religiously-motivated violence and oppression,” declared the latest report from Aid to the Church in Need (ACN), the group organizing the event, and moreover “the extent of this persecution is largely ignored by our media.”

In a gesture meant to combat global indifference to the plight of persecuted Christians, on Saturday, Feb. 24, one of Rome’s most iconic structures—the Colosseum—will be illuminated in red, representing Christians who have shed their blood for the faith.

In the 13 countries where Christians suffer the most intense persecution, the situation has worsened in all but one—Saudi Arabia—in the last two years, and conditions there have stayed the same.

“In almost all the countries reviewed,” the report reads, “the oppression and violence against Christians have increased since 2015 – a development especially significant given the rate of decline in the immediate run-up to the reporting period.”
The group has also complained of culpable inaction on the part of western countries that have shown little effective support for persecuted Christians in the Middle East.
“The one exception is Saudi Arabia, where the situation was already so bad it could scarcely get any worse,” the report said. (Click to Source)

CLICK HERE for my ongoing special to all of my readers, for a super affordable telemedicine plan for you or for your entire family. The pricing is under $20 per month, so please get more info on this spectacular and unbeatable plan for 24/7 unlimited doctor visits by phone and online. There’s always a doctor when you need one – anytime day or night.