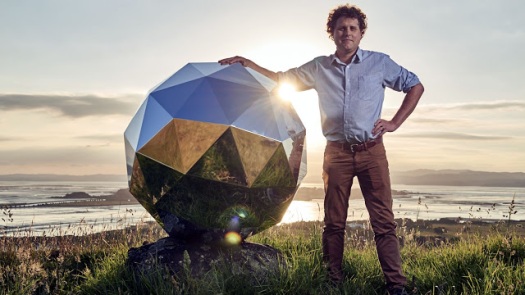 It’s just a three-foot wide geodesic sphere made of carbon fiber and reflective materials—more or less a stunt, but what Peter Beck’s “Humanity Star” symbolizes is so much more.  This artificial star ascended into the heavens aboard an Electron rocket launched from New Zealand on January 21st and is now circling the earth once every 93 minutes.  The Humanity Star apparently serves no other purpose than as a testimony to the “greatness” of mankind and its unwavering drive to reach Heaven without God and to defy His loving boundaries.

Of course there is nothing inherently wrong with rockets or satellites, but what this particular project shows is that mankind, just as in the days of the Tower of Babel, is seeking to reach Heaven in a sinful, godless state.  Mankind’s new focus is unity and technological “progress” regardless of the moral and spiritual consequences and it will take nothing less than seven years of judgement for the world to finally return to its senses—and to return to the God who made it.

In the meantime, we can catch a glimpse of a spiritual struggle playing out behind the scenes because these things are a testimony to God’s absolute sovereignty.  These are symbols of the truth that “as in Heaven, so on earth.”

How you have fallen from heaven,
morning star, son of the dawn!
You have been cast down to the earth,
you who once laid low the nations!
You said in your heart,
‘I will ascend to the heavens;
I will raise my throne
above the stars of God;
I will sit enthroned on the mount of assembly,
on the utmost heights of Mount Zaphon.
I will ascend above the tops of the clouds;
I will make myself like the Most High.’
But you are brought down to the realm of the dead,
to the depths of the pit.

Those who see you stare at you,
they ponder your fate:
‘Is this the man who shook the earth
and made kingdoms tremble,
the man who made the world a wilderness,
who overthrew its cities
and would not let his captives go home?’

Since the beginning of Creation the wayward cherub Lucifer (aka Satan) has sought to supplant God’s rightful rule on earth and in the heavens through the use of willing human intermediaries, and to a certain extent he has been successful.  He swindled Adam and Eve out of their inherent right to rule as sons and daughters of God and quickly brought humanity under his dominion.  Since then he has dominated the kingdoms of the world (Matt. 4:8–9; Jn. 14:30).

Yet at the Cross his dominion suffered a mortal wound and his de facto rule came crumbling down because all of those “born of God” (Christians / Believers) were freed from his clutches (1 Jn. 5:18) and he was cast out (Jn. 12:31).

Yet his being “cast out” is an “already but not yet” kind of thing.  He still has access to Heaven and is still trying to accuse and bring the world back under his control, but his hold on those who now trust in Christ has been entirely destroyed and soon and very soon he will be literally cast out of the heavenlies once and for all:

Then I heard a loud voice in heaven say:

‘Now have come the salvation and the power
and the kingdom of our God,
and the authority of his Messiah.
For the accuser of our brothers and sisters,
who accuses them before our God day and night,
has been hurled down.
They triumphed over him
by the blood of the Lamb
and by the word of their testimony;
they did not love their lives so much
as to shrink from death.
Therefore rejoice, you heavens
and you who dwell in them!
But woe to the earth and the sea,
because the devil has gone down to you!
He is filled with fury,
because he knows that his time is short.’

The actual casting out of satan from Heaven is something yet future as described in Revelation 12, but it is a foregone conclusion because of the Cross.  Christ’s death on the Cross and subsequent resurrection became an irrevocable down payment on the future resurrection, transformation, and rapture of all believers.  And when we go up, satan comes down.  He knows this very well.

On September 23rd and 24th last year, an astronomical alignment appeared in the sky that perfectly/flawlessly/unmistakably matched the description given in Revelation 12:1–2a.  That passage of Scripture points directly to the nearness of the rapture, because the context is the future birth and rapture of the Church to Heaven (see here, here, and here).  While the alignment is now a fact of history, all speculation as to the timing of the rapture is just that—speculation.  That being said, we can’t lose sight of the fact the Church’s exit sign has now appeared, which means the rest of Revelation 12 is coming down the pike and fast.

Remember that the Revelation 12 Sign occurred some 9–10 months after Jupiter, representing the male child, entered Virgo’s womb.  It was the perfect picture of pregnancy.  Other signs occurred around the same time that mirrored Christ’s first advent (see here), which made the picture that much more perfect.

The Humanity Star is a reminder to me that satan is always one step behind God.  The sign God made has already been seen and now, several months later, a fake star—the Antichrist Star—rises into the heavens in preparation for satan’s short-lived world resurgence through his puppet, a world ruler who will soon appear called the antichrist (1 Jn. 2:18; 2 Thess. 2:3).  The Humanity Star will orbit the earth for the length of a human pregnancy, de-orbiting and crashing back to earth some nine months later in September or October of this year.

The devil knows his time is short and he knows, better than perhaps most, that the Revelation 12 Sign in September was a big indicator that the clock is quickly counting down.  He’ll have one more go at world domination after the Church leaves, but his rule will be brought to a violent end.

You were the seal of perfection,
full of wisdom and perfect in beauty.
You were in Eden,
the garden of God;
every precious stone adorned you:
carnelian, chrysolite and emerald,
topaz, onyx and jasper,
lapis lazuli, turquoise and beryl.
Your settings and mountings were made of gold;
on the day you were created they were prepared.
You were anointed as a guardian cherub,
for so I ordained you.
You were on the holy mount of God;
you walked among the fiery stones.
You were blameless in your ways
from the day you were created
till wickedness was found in you.
Through your widespread trade
you were filled with violence,
and you sinned.
So I drove you in disgrace from the mount of God,
and I expelled you, guardian cherub,
from among the fiery stones.
Your heart became proud
on account of your beauty,
and you corrupted your wisdom
because of your splendor.
So I threw you to the earth;
I made a spectacle of you before kings.
By your many sins and dishonest trade
you have desecrated your sanctuaries.
So I made a fire come out from you,
and it consumed you,
and I reduced you to ashes on the ground
in the sight of all who were watching.
All the nations who knew you
are appalled at you;
you have come to a horrible end
and will be no more.

Soon and very soon we will go to Jesus and the world will turn to satan.  He’ll have his dominion back, but only for a few short years.  When that time is up, we’ll return with the LORD to execute justice on the usurper:

I saw heaven standing open and there before me was a white horse, whose rider is called Faithful and True.  With justice he judges and wages war.  His eyes are like blazing fire, and on his head are many crowns.  He has a name written on him that no one knows but he himself.  He is dressed in a robe dipped in blood, and his name is the Word of God.  The armies of heaven were following him, riding on white horses and dressed in fine linen, white and clean.  Coming out of his mouth is a sharp sword with which to strike down the nations.  ‘He will rule them with an iron scepter.’  He treads the winepress of the fury of the wrath of God Almighty.  On his robe and on his thigh he has this name written:

KING OF KINGS AND LORD OF LORDS.

And after that, he’ll be locked away to face an absolutely certain judgment: (Click to Source)

And I saw an angel coming down out of heaven, having the key to the Abyss and holding in his hand a great chain.  He seized the dragon, that ancient serpent, who is the devil, or Satan, and bound him for a thousand years.

One Reply to “The Antichrist Star Rises”