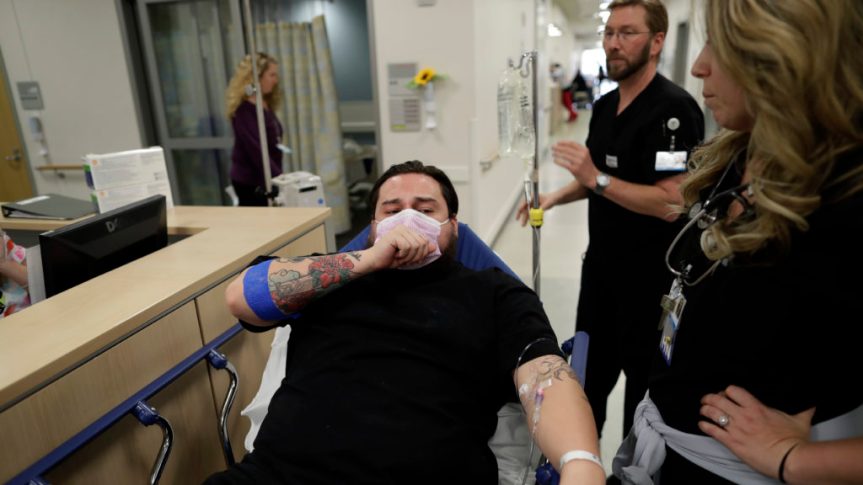 The entire continental United States is experiencing widespread flu right now, the first time in the 13 years of the current tracking system that that has happened, according to the Centers for Disease Control and Prevention.

Officials said that this flu season is shaping up to be one of the worst in recent years.

The rate of flu hospitalizations — the number of people hospitalized with flu per 100,000 — nearly doubled last week compared with the previous week. Last week it was 22.7 per 100,000 people; the week before that rate was 13.7.

The latest data — for the week ending Jan. 6 — suggest the season may be peaking right now, the CDC’s director, Dr. Brenda Fitzgerald, told reporters Friday. But she warned that many more people will be infected before the season is over.

There’s a difference between an active flu season — when a large number of people get sick — and a severe season, when the numbers of people hospitalized for flu or who die from the infection are unusually high.

It can be hard to tell in real time where a flu season will fall on the severity scale, because sometimes reports of influenza hospitalization and deaths — especially deaths among children — lag.

That said, this year is starting to look like a severe season, and maybe more severe than last year, which was also bad, said Dr. Dan Jernigan, head of CDC’s influenza division.

“There’s lots of flu in lots of places,” he said.

The influenza A virus H3N2 has caused the lion’s share of the illness in most parts of the country this year.

But recently there’s been an uptick in activity by another influenza A virus, H1N1, Jernigan said, warning that even if the season appears to have peaked, flu viruses will circulate for weeks to come and people should continue to take precautions against getting infected.

Flu often hits the ends of the age spectrum more than the middle, and that’s the case this year as well. The CDC reported seven more children have died from flu, bringing the season total to 20 so far. While tragic, that number is low in comparison with other years — 110 last year, 92 in 2015-2016. But if other seasons are a gauge, that grim tally may continue to rise in coming weeks.

Officials feared that the flu vaccine may not work particularly well this season, but it appears to be faring slightly better than expected.

Preliminary testing by the CDC suggests the vaccine is probably more protective than it was in Australia during its 2017 winter. The Australian interim estimate suggested the H3N2 component of the vaccine — and H3N2 was the main virus there during their most recent winter — was only about 10 percent effective.

That means if 100 people got the flu shot and all were exposed to H3N2 viruses, only 10 would have been protected.

Jernigan said it looks more like the H3N2 portion of the vaccine is performing here like it did last year, when it was 34 percent effective at preventing infection. Unfortunately, that’s about on par for the flu shot’s H3N2 component, which is the weak link of flu vaccine.

The CDC should have interim data on the question of the vaccine’s effectiveness in the second half of February. (Click to Source)