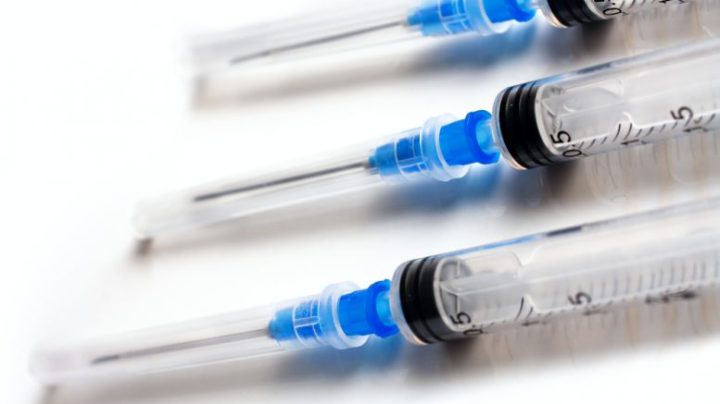 It’s that time again: the hype has begun to push flu shots into the arms of everyone, from six-month-old infants to 96-year-old grandparents. Flu vaccines have been around since the 1930s when it was discovered that the influenza viruses grew well in eggs and could be harvested for a vaccine. Flu shots contain stray, potentially cancer-causing stray viruses and the multi-dose vials remain loaded with mercury. For nearly 90 years, this disgusting slurry has annually been injected into humans. Truth is, the long-term consequences of this action are completely unknown.

For the 2017-18 flu season, there will be a variety of 10 different flu shots made by five different manufacturers:

Each of vaccine has its own unique spin: Different ingredients, individualized manufacturing processes, and even age-specific utilization guidelines. It’s gotten so complicated that websites have been created to sort by age of patient, allergens, how the shots are delivered and which vial has three or four strains.

Deciding which strains to be included in the annual flu shot is a global affair. Active surveillance and infection trends are gathered by 122 national influenza centers in 94 countries. The data are analyzed by the four World Health Organization (WHO) Collaborating Centers located in Atlanta, London, Melbourne, and Tokyo. Of the hundreds of strains and substrains of influenza viruses in circulation, the WHO chooses strains that were the most prevalent in the Southern Hemisphere’s flu season last year.  The flu shot has historically consisted of three viral strains: two influenza A viral strains and one strain of influenza B. Beginning last year, 11 of the currently approved vaccines arequadrivalent, with another strain of influenza B added to the mixture.

The production of influenza vaccine generally begins in March for the Northern Hemisphere. Scientists use an educated guess – a kin to a crystal ball – to predict which viruses will be most prevalent 8 months later, when the vials of vaccine are ready for use and shipped to providers. Not only is the selection of viruses tricky, preparing the virus for use gets even more complicated.

Processing the virus for use

After the annual strains, called “the seed viruses,” are selected, the three/four viruses are tested for their ability grow in eggs. If one of the seed viruses propagates poorly, it is mixed with a stock influenza that does grow well in eggs. Each influenza A virus consists of eight distinct genes. Combining a seed virus with a stock virus can create up to 256 (28) new viruses. Researchers are then tasked with identifying which of these 256 recombinants has an (H) antigen on its surface that matchs the seed virus AND has the internal genes of the egg-growing stock virus. From there, the selected hybrids are sent to the manufacturers and the process begins.

Every year the CDC says that if the vaccine virus isn’t a “close match” to the viruses in circulation, the flu shot will be less effective, leading to increased illness, increased hospitalizations, and even an increased number of deaths. But if the vaccine viruses are a man-made mixture, how can they be a “close match”? For those who preach, “get your flu shot!”, how close is close enough?

During the 2014-15 season, the flu shot effectiveness was only 19%; during the 2015-16 season, it was only slightly better at 47%, truly about the same as a toss of a coin. But how often does the influenza vaccine really have a chance at keeping you from contracting an influenza infection?

Flu-like Symptoms are not “the flu”

Most people think they have the flu if they become ill with flu-like symptoms: a headache, body aches, chills, cough, and fever. But there are more than 200 viruses and other pathogens that can cause “influenza-like illnesses,” defined as fever (temperature of 100°F [37.8°C] or greater) and a cough and/or a sore throat caused by a pathogen other than influenza virus. Such causes can include enterovirus, rhinovirus, coronavirus, respiratory syncytial virus and a long list of streptococcal bacterial strains. When an influenza vaccine is injected, the antibodies are specific for influenza viruses. The vaccine will have no effect – yes, nearly zero! – against other pathogens.

Influenza viruses are the only viruses that cause the flu. Influenza-like illness is not influenza illness. This is why you can get the flu shot and still get what appears to be “The Flu.”

So, how often are flu-like symptoms actually caused by influenza viruses?

Knowing that each week thousands of nasal and throat swabs from ill persons are sent to CDC Centers to be tested to determine the type of pathogen causing the patient’s symptoms, I examined the CDC’s Weekly Flu Activity and Surveillance Reports. The government loves to track of numbers and data, and these reports are a prime example of your tax dollars at work. Going through each report was a tedious task, but the results are important – and very telling – identifying WHY the influenza vaccine is completely unnecessary.

Meaning, if you really believe the flu shot keeps you from getting the flu, it would be protective only 15% of the time. Said another way, if you get an influenza-like illness, you have an 85% chance that the bug making you sick is not an influenza virus.

Here’s a link to a pdf file  I created using the CDC’s own data. If you’re a healthcare worker, print this chart. Take it to your boss. Serious side effects can occur from the flu shot, including Guillain-Barre syndrome and brachial neuritis with very little benefit to you, or to the hospitalized patients you serve.

After the hybrid virus has been chosen from the mix, the virus is inserted into the membranes of fertilized eggs. Eleven days later, the slurry is extracted and centrifuged to remove as much blood and tissue as possible. The details of this process were described previously in my article, “The Disgusting Chicken Stuff in Vaccines” found here.

Prior to filling the vials with the vaccine solution, the following list of ingredients are added. Different flu shots contain different types and amounts of particulate matter. Even the amount of HA viral antigen can vary, from only 15 mcg in Fluad to 135 mcg in FluBlok. Unless you read specific package insert for the specific injection you (or your children) are about to receive, you won’t know what’s coming through that needle:

Each of the ingredients listed above have the potential for causing serious side effects that will be discussed in detail in future releases of this series.

Manufacturers moving away from eggs

As previously discussed, manufacturing flu shots from eggs is time-consuming and only allows one “crop” per year. First described in the mid-1990s and still in early stages, all major players in the vaccine industry are moving toward the use of cell cultures to replace egg-based vaccines, particularly flu shots. With cell lines, production can be rapidly scaled up in times when the government thinks there is an emergency and needs more flu shots.  Below are the cell lines currently used for flu shots.

sIn 2013, the FDA approved the first influenza vaccine – FluBlok – produced in ovaries taken from fall army worms.  The manufacturer extracts the HA gene from this year’s seed virus and combines it with another virus, called a bacteriophage. This second virus only infects insects. Then the recombinant virus is grown in billions of cells derived from the fall armyworm. The infected worm ovaries churn out large quantities of the desired HA protein, and within three weeks, the manufacturer extracts and “purifies” the virus, readying it for insertion into the season’s vaccine.

Madin Darby canine kidney (MDCK) cells were first isolated from a healthy female cocker spaniel in 1958. The cells were immortalized, meaning they have been dividing in perpetuity since that time. A continually dividing cell, by definition, has the ability to form tumors or undergo an oncogenic transformation. The FDA is well aware of this and has held several summits regarding the use of neoplastic cell for the production of vaccines.  For example, as far back as 1998, the Center for Biologic Education and Research (CBER) and the Vaccines and Related Biological Products Committee (VRBPAC), both divisions within the FDA, discussed the use of neoplastic and tumor-causing cells for vaccine manufacture. They concluded an arbitrary amount of tumor-causing DNA – up to 10ng – would be allowed in vaccines.

The first human influenza vaccine using MDCK cells was licensed in the Netherlands in 2001 (Influvac). This vaccine is no longer in production. Currently, FluCelVax, manufactured by Seqirus in partnership with Novartis, is the only FDA approved flu shot available in the US made from dog cells.

I hope that the information above will be enough to convince you, your family and your friends to never get another flu shot. I hope you will use these facts to confront a system forcing you to be injected with this disgusting solution. We have installed a print icon at the bottom of each article. Share with friends both through social media and by handing out the article in person.

In the mean time, wash your hands, avoid refined foods particularly white sugar, take at least 3000 mg of Vitamin C ascorbate daily and have your Vitamin D level checked (the level should be 80-100ng/ml to be protective.) By following these simple steps, you’ll be well this winter without a flu shot.  (Click to Source)