The Coming Deliverance of Judah

The burden of the word of the Lord against Israel. Thus says the Lord, who stretches out the heavens, lays the foundation of the earth, and forms the spirit of man within him: “Behold, I will make Jerusalem a cup of drunkenness to all the surrounding peoples, when they lay siege against Judah and Jerusalem. And it shall happen in that day that I will make Jerusalem a very heavy stone for all peoples; all who would heave it away will surely be cut in pieces, though all nations of the earth are gathered against it. In that day,” says the Lord, “I will strike every horse with confusion, and its rider with madness; I will open My eyes on the house of Judah, and will strike every horse of the peoples with blindness. And the governors of Judah shall say in their heart, ‘The inhabitants of Jerusalem are my strength in the Lord of hosts, their God.’ In that day I will make the governors of Judah like a firepan in the woodpile, and like a fiery torch in the sheaves; they shall devour all the surrounding peoples on the right hand and on the left, but Jerusalem shall be inhabited again in her own place—Jerusalem.

“The Lord will save the tents of Judah first, so that the glory of the house of David and the glory of the inhabitants of Jerusalem shall not become greater than that of Judah. In that day the Lord will defend the inhabitants of Jerusalem; the one who is feeble among them in that day shall be like David, and the house of David shall be like God, like the Angel of the Lord before them. It shall be in that day that I will seek to destroy all the nations that come against Jerusalem.

Mourning for the Pierced One 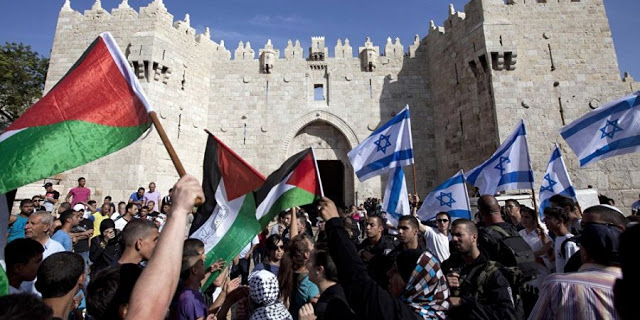 Nearing the one year anniversary of the passage of Security Council Resolution 2334 which formally called for the dividing of God’s covenant land, the United Nations General Assembly has just overwhelmingly passed Resolution 11982, a document simply entitled “Jerusalem.”  The vote was 151 to 6, with 9 abstentions.  At the heart of the resolution is this unequivocal rejection of Israel’s sovereignty over its eternal capital, Jerusalem (source):

[The General Assembly] reiterates its determination that any actions taken by Israel, the occupying Power, to impose its laws, jurisdiction and administration on the Holy City of Jerusalem are illegal and therefore null and void and have no validity whatsoever, and calls upon Israel to immediately cease all such illegal and unilateral measures.

Don’t downplay the significance of this historic vote.  It may only have symbolic affect, but God takes these votes seriously and this may very well be regarded by Him as the world’s final answer to His claim over the Promised Land.  In December 2016 the United Nations voted to sever Judea and Samaria from Israel.  In November 2017 the United Nations has voted to sever Jerusalem from Israel.  This overwhelming vote may be the catalyst for Zechariah 12:3:

Prophecy continues to move towards a soon and climactic conclusion and this vote brings us ever closer to that conclusion.

Just several hours ago the Trump Administration began lifting the veil on its Middle East peace plans with Trump’s son-in-law Jared Kushner delivering a historic speech at the Saban Forum:

You can find telling highlights from the speech here.  In short, Kushner has revealed that the Trump Administration is planning to push hard for a final status agreement between Israel and Palestine and thus the United States’ defiant attempt to divide God’s land brings the country and world ever closer to global judgment.  There is even a hint that the United States may not move the embassy to Jerusalem until progress is made on a final peace agreement.

This judgment may already be playing out as we see airwaves consumed with the news of Michael Flynn’s charges in the FBI’s “Russian collusion” case.  The statements in question from Flynn pertained to the December 2016 vote against Israel (of all topics!).

While the Middle East situation is nearing a crescendo, North Korea has just successfully tested a new ICBM called the Hwasong-15 that puts the entire continental United States within range.  Geopolitical and military analysts are coalescing around the belief that the North Korean situation is nearing the point of no return, where the war of words cannot be taken back.  Agreement is building that war is now inevitable and this war will be unlike anything modern Americans are familiar with.

In the midst of all of this, another possible sign in the heavens has appeared: the longest-lasting rainbow ever recorded.  The double rainbow appeared over Taiwan and lasted for nine hours, beating the previous record by a full three hours. Remember that the rainbow is a sign that God will never again judge the entire world with a flood.  However, the second global cataclysm is a judgment by fire.

Compare God’s promise in Genesis to what the apostle Peter prophesies will happen at the end of the age:

Above all, you must understand that in the last days scoffers will come, scoffing and following their own evil desires.  They will say, ‘Where is this ‘coming’ he promised? Ever since our ancestors died, everything goes on as it has since the beginning of creation.’  But they deliberately forget that long ago by God’s word the heavens came into being and the earth was formed out of water and by water.  By these waters also the world of that time was deluged and destroyed.  By the same word the present heavens and earth are reserved for fire, being kept for the day of judgment and destruction of the ungodly.

But do not forget this one thing, dear friends: With the Lord a day is like a thousand years, and a thousand years are like a day.  The Lord is not slow in keeping his promise, as some understand slowness.  Instead he is patient with you, not wanting anyone to perish, but everyone to come to repentance.  (Click to Source)