NORTH Korea and the US have cut all channels of talks amid the growing threat of war between Donald Trump and Kim Jong-un. 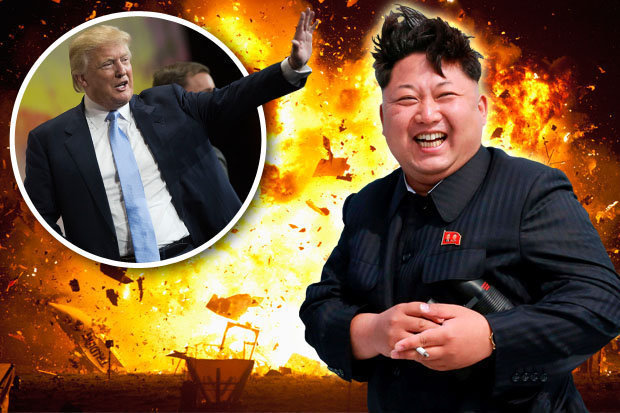 South Korean officials revealed Washington has severed all back channels with Pyongyang as both sides continue to talk up war.

The US quit any attempt to talk to Kim after he detonated his sixth and most powerful nuclear bomb last month.

War fears have been brewing as both sides ratchet up the rhetoric as Trump threaten to “totally destroy” North Korea.

Kim has threatened to detonate another nuclear bomb over the Pacific as tensions remain high.

Choung Byoung-gug, of South Korea’s opposition group the Bareun Party, revealed the US has cut all talks with the North.

Kim’s hydrogen bomb blast is believed to have been as powerful as 250 kilotons – more than 10 times the strength of the bomb dropped on Hiroshima.

World leaders condemned the blast which was seen as North Korea’s worth ever provocation of the West.

Mr Choung said: “I got the impression that there were talks up until the sixth nuclear test, and then they stopped.

“They told me they think the circumstances have changed.”

He added however the US reassured him there would be no military action without the consent of South Korea.

Trump however will defend their ally if Kim attacked the city of Seoul, Mr Choung said.

The devastating consequences of an attack on the South was revealed today by a North Korea watchdog.

It was predicted at least 2 million people would die if Kim launched a strike on South Korea.

Kim has not launched a missile or nuclear test since September 15, during which he fired a rocket over Japan.

Russia and China have both called for calm in the region amid the war talk from Trump and Kim.

President Vladimir Putin yesterday warned the US to back down over North Korea or risk triggering war.  (Click to Site)