The “mighty” nephilim giants of Genesis 6 are gone, but Revelation describes their reappearance to play a major role in the end times. Despite this, few Christians know anything about the Nephilim—nor would they want to given the scary details of these actual monsters. Without facing this shocking level of evil and abomination that God has chosen to allow, you can’t fully understand end time prophecy or even God’s ways. If you are brave, it’s time to understand the Nephilim in the Bible and conquer your fear of monsters. 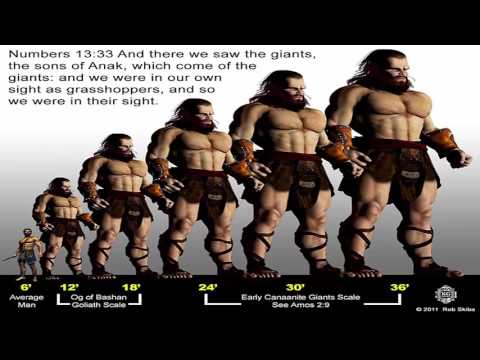 Most of us stopped being scared of monsters once we left childhood and learned that, like Santa Claus, these scary creatures are fantasy. They exist only in children’s imagination, legends, Greek mythology and movies like Poltergeist—not reality.

However, if you (as a believer) stop to read the entire Bible, you may be forced to reconsider that reassuring thought. The OT and NT have accounts of several varieties of these real life monsters:

There is one other biblical monster which the typical Christian has probably missed: the “nephilim.” Despite its obscurity, we shall see that the nephilim are a key to understanding how all of the above are connected and also aspects of end time Bible prophecy such as the locusts, Antichrist/Beast and False Prophet, and “the abyss.” It also may explain why there are persistent reports of UFOs and alien life in the world today.

Who Are the Nephilim?

The nephilim are one of the more mysterious and disturbing topics of the Bible. The word nephilim only appears twice in the Bible. Here are the two passages:

Genesis 6:1-4 (HCSB) — 1 When mankind began to multiply on the earth and daughters were born to them, 2 the sons of God saw that the daughters of mankind were beautiful, and they took any they chose as wives for themselves. 3 And the LORD said, “My Spirit will not remain with mankind forever, because they are corrupt. Their days will be 120 years.” 4 The Nephilimwere on the earth both in those days and afterward, when the sons of God came to the daughters of mankind, who bore children to them. They were the powerful men of old, the famous men.

Nephilim literally means “fallen ones.” But what are they and what made them powerful and famous? Early interpreters believed them to be giants. Nephlim was translated as “giants” (gigantes) by most ancient Bible versions such as the Greek Septuagint (“gigantes”) and Latin Vulgate (“gigentes”).

The other occurrence of nephilim bears that conclusion out. It is found in the “evil report” that the ten unfaithful spies gave of the Promised Land. Note that unlike the first account:

Numbers 13:32-33 (HCSB) — 32 So they gave a negative report to the Israelites about the land they had scouted: “The land we passed through to explore is one that devours its inhabitants, and all the people we saw in it are men of great size. 33 We even saw the Nephilim, there—the descendants of Anak come from the Nephilim! To ourselves we seemed like grasshoppers, and we must have seemed the same to them.”

The Nephilim are said to be the source of the Anak. As the context indicates, the Anak were one of the races of giants in the Bible who could view the Israelites as ants in comparison. Quite fittingly, “anak” (ענק) is the word for giant in modern Hebrew.

Just as with the rapture timing question, not everyone agrees on what the Nephilim were. Just as the majority of Christians believe in a pretrib rapture, I’d bet the majority of Christians doubt the nephilim really are giants or that the “sons of God” who parented them are angels. Just like the idea of a post-trib rapture, it’s too scary for the average Christian to believe that God would allow such ghastly horrors as evil angels to roam freely and create freakish monsters. But as we shall see, just as God is allowing us to be on the earth for the Great Tribulation, he is allowing us to be on the earth with living, breathing monsters. (Click to Site)