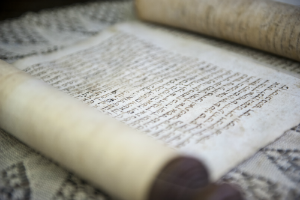 From Trials to Trails
There is an interesting word to be found as we begin the Book of Numbers. It is translated “take a census.” The word in Hebrew is “Nasa.” The word has been used in Scripture almost 100 times in the first three books of Torah and will also be the title of our next Torah portion. One of the meanings of this word is “to look up,” or “raise up your head.” The secondary meaning is an interesting tie-in as it means to “bear up” or “support.” A search on this word is fascinating. Cain used it when saying his punishment was too much for him to bear (nasa). It is used to describe how the waters of the flood would bare up (nasa), the Ark. Abram would lift up (nasa), his eyes to look upon The Land.
How are the two definitions of this words tied together? The answer is found in Psalm 121: “If I raise my eyes to the hills, from where will my help come?  My help comes from ADONAI, the maker of heaven and earth.” The verse ties the two definitions together and tells us that if we will lift up (nasa) our eyes, we will find the One who can bear our burdens, lift us up above trouble, and help in time of need.
At this point in the journey of the Hebrews, they have been through quite a few trials. Plagues came upon the land they once called home. A sea stood before them as an angry and motivated army pursued them. Physical, and perhaps even spiritual in a way, thirst and hunger drove them to faithlessness including a Golden Calf most would desire to forget. Each place life would bring them to was designed by Yah to have them look up to their Creator, their Deliverer, the One who desired to carry them as on eagles wings to their destiny. This could not be accomplished by looking down at circumstances.
Looking up was not a position the Hebrews were accustomed to. They had been slaves in Egypt for many years. If you put a person into slavery, you will notice over time that their very posture will change. As a people, slaves will no longer look to the horizon, but rather to the ground. It is not lack of possessions which makes a person a slave, but a lack of hope of a good future. Before the Hebrews could go on in their journey, they had to start looking up.
This is a concept also being taught in Luke 21. After a discourse of what the Day of Yah will be, the writer does not tell us to dissect every disaster and news article which comes out, but rather to Nasa, for our redemption is getting closer.
Somewhere between the Hebrews in the wilderness being told to nasa and the end of this age, (beginning of real life) is where you and I live on a daily basis. As I talk with and interact with people today, I find we all have something in common: trials! From changes in relationships to health and financial issues to whatever you want to fill in the blank with, life is full of “Stuff” for most everyone I know. What is the purpose of it all? It’s very simple, really. To get us looking up toward Him. (Click to Article)