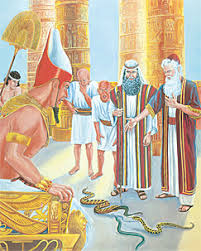 Moshe traveling back to Egypt was not just a trip to the corner convenience store. It was quite a journey, and during this time the words spoken to him at the Burning Bush and his conversation with YH VH was probably played over and over in his mind. He probably came up with a hundred ways this could go. As the imaginations became reality, at some point he probably thought to himself, “I didn’t see that coming!”

With every plague the Pharaoh is becoming a bit more ticked off, and to make matters worse, Moshe is again living with the fact that his own family, the Hebrews, are not too happy with him either. The difference between his current situation and the one forty years earlier is he is able to “see” the hand of Elohim working in his midst. This is what gives him strength.

To fully understand where Moshe is at, we must take a look at the word I used: see. In English the word “see” is to look upon something with our eyes. This limits us to our natural vision. In Hebrew the word for see is “ra’ah,” which means to not only see with our eyes, but to perceive and consider with our spirit. Let’s look at it this way; When a situation arises in life, whether good or bad from our perspective, we have a choice. We can either “see” it through our eyes, or we can ask to “see” it through His.

For Moshe and the Hebrews, a greater work had to be done than simply leaving Egypt. Egypt was going to have to leave them.

With all this said, let’s bring it to our day. It appears the whole world has entered into a time of plagues. From ebola in Africa to killings in Paris, the world is being set on fire. I, for one, believe it is just the beginning. There are going to be events in the near future which will make us stand with Moshe and say, “I didn’t see that coming.” The choice each of us face is the decision to not “see” these events with our eyes, but to pray for discernment to “ra’ah” through His eyes, for there is a greater purpose going on in our midst than just those “lousy old politicians” being judged for the way they are treating us.

The plagues in Egypt were not only to take the Hebrews out of Egypt, but to take Egypt out of the Hebrews. With each plague Egypt was being chipped from their hearts and a greater work was being done. In the end, many would not let Egypt go and would die in the wilderness. Let us not make the same mistake. When we “see” things coming and they are not the way we expected, let us pray that we may “ra’ah” the greater work, which by the way, may be a work within us.