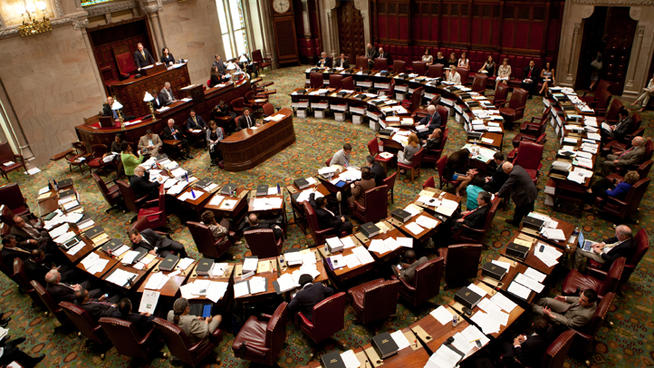 A key New York Senate leader and the Assembly speaker said they expect the state Legislature to vote Monday to enact what would be the nation’s first gun control measure following last month’s Connecticut school shooting.
“I think when all is said and done, we are going to pass a comprehensive gun bill today,” Sen. Jeffrey Klein told reporters Monday morning. “I’m very excited about it. I am very confident we are going to vote on a comprehensive bill that will be agreed on by the governor, the Senate and Assembly.”
People familiar with closed-door negotiations told The Associated Press a tentative deal was struck over the weekend.
The tentative agreement would further restrict New York’s ban on assault weapons, limit the size of magazines to seven bullets, down from the current 10, and enact more stringent background checks for sales. Other elements, pushed by Republicans, would refine a mental health law to make it easier to confine people determined to be a threat to themselves or others.
Senate Republicans also have included a further crackdown on illegal gun trafficking into New York, the people said. Most New York City gun crimes involve weapons illegally brought into the state, state and city officials say.
The people spoke on condition of anonymity because the proposal had not been discussed among rank and file legislators. They say the tentative deal will be debated behind closed doors Monday in the Senate and the Democrat-led Assembly and could be sent to the floor for a vote Monday.
A Cuomo administration official, who also spoke on condition of anonymity because the deal was not final, said there was no agreement yet.
A vote Monday would come exactly one month after a gunman killed 20 children and six adults inside Sandy Hook Elementary School in Newtown, Conn.
Assembly Speaker Sheldon Silver said the deal will include ways for schools to use state aid to better guard against shootings.
The vote also would require Cuomo to issue a “message of necessity” that would dispense with the three days of public review that bills are supposed to have under the state constitution. There was no immediate comment from Cuomo, who made these gun control provisions a keynote of his State of the State address on Wednesday.
“I think the message out there is clear after Newtown and to get us down this road as quickly as possible to basically eradicate assault weapons from our streets in New York as quickly as possible is something the people of our state want,” Silver said. “It’s an important thing to do. It is an emergency.”
Silver said lawmakers continued into Monday settling the remaining issues of “how you do certain things in drafting it.”
He said a registry of assault weapons will be created, grandfathering in assault weapons already in private hands. He said crimes using guns will get additional mandatory minimum sentences.
“The solution is to get those assault weapons off the street,” Silver told reporters.
The bill will be the first test of the new coalition in control of the state Senate, which has long been run by Republicans opposed to gun control measures. The chamber is now in the hands of Republicans and five breakaway Democrats led by Klein, an arrangement expected to result in more progressive legislation.
Former Republican Sen. Michael Balboni said that for legislators from the more conservative upstate region of New York, gun control “has the intensity of the gay marriage issue.” In 2011, three of four Republicans who crossed the aisle to vote for same-sex marriage ended up losing their jobs because of their votes.
“It was always startling to me the vast cultural divide between New York City metropolitan view on gun control and most of the upstate communities,” said Balboni, who represented part of Long Island for 10 years and was a Senate leader.
“Gun advocates see these incidents as almost cyclical and that in the wake of a national shooting incident, they have seen repeated calls for control,” he said Monday. “They view it as a slippery slope to the banning and confiscation of weapons. Emotions run high and there will be tremendous pressure on all upstate legislators, Republicans and Democrats, to keep their base.”
Also a concern is a major gun manufacturer in upstate New York.
Remington Arms Co. makes the Bushmaster semi-automatic rifle that was used in the Connecticut shootings and again on Christmas Eve in Webster, N.Y., when two firefighters were slain responding to a fire. The two-century-old Remington factory in Ilion in central New York employs 1,000 workers in a Republican Senate district.
Republican Assemblyman Marc Butler warned last week that a more restrictive assault weapon ban could cost the factory 300 jobs.
Click to article

Join 313 other subscribers
Follow The Blogging Hounds on WordPress.com